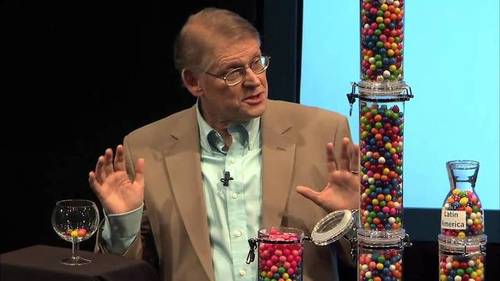 In the first hour of his show on Wednesday (November 25, 2015), Rush Limbaugh had some fun prepping his listeners to endure being harangued about political issues by any leftist relatives with whom they'll be sharing a dinner table on Thanksgiving.  For example, the Democratic National Committee has a special web page titled "Your Republican Uncle" and bearing this introduction:

The holiday season is filled with food, traveling, and lively discussions with Republican relatives about politics sometimes laced with statements that are just not true. Here are the most common myths spouted by your family members who spend too much time listening to Rush Limbaugh and the perfect response to each of them.

One of the subjects they purport to set their (gullible) groupies straight on is "Immigrants & Refugees." (Their talking point under that heading is a very brief challenge/response  containing substantial misinformation about the vetting of refugees by our crack federal bureaucracy.)

If you're anticipating such amiable colloquy at Thursday's dinner table, how might you get ready for the onslaught?

Well, immigration is a vast subject about which most Americans, even "bright, well-educated, well-traveled" ones, tend to know very little.  So it's difficult to prepare for the myriad of possible sub-topics that might arise.  Thus it may be better to go armed (mentally!) with something simple and of large import.

That could well be the concept that's in NumbersUSA's famous six-minute "World Poverty, Immigration, and Gumballs" video.  Roy Beck's presentation in the video makes graphically clear—even to nearly-innumerate viewers—that mass immigration to the U.S. can't materially succour "the wretched of the earth," since there are so many of them.

Presumably because of all the refugee news of late, there's been a new surge of viewership for the "gumballs" video.  In a mass email dispatched last Saturday (November 21), with subject line "Our gumball video went viral again—have you seen it?", NumbersUSA announced:

You may have seen it making the rounds on the internet, but here it is straight from the source.

This video is more relevant than ever as politicians in Washington are saying we should resettle tens of thousands of refugees in the U.S. It has been viewed over 17 million times on Facebook in the past couple weeks and we weren't even the ones sharing it.

Their email links to the video at this Facebook page, but you don't have to sign in with Facebook to view it there.  (A comment at that page by one Shawn Kelchner, at 11:44 a.m. on November 21, is "Best video ever! even dumb people should be able to understand.")

It's also available elsewhere on the web.  For example, this version at a YouTube page has English [!!] subtitles.  More generally, just do a Google search on "gumballs video," and you'll find it on top.

If you, as a VDARE.com reader, have never seen the "gumballs" video, it's high time you did.  If you have seen it before, this is a perfect time for a review.  Either way, it'll be good to have it fresh in your mind if you'll be sitting around with a cohort of the clueless at Thanksgiving dinner.