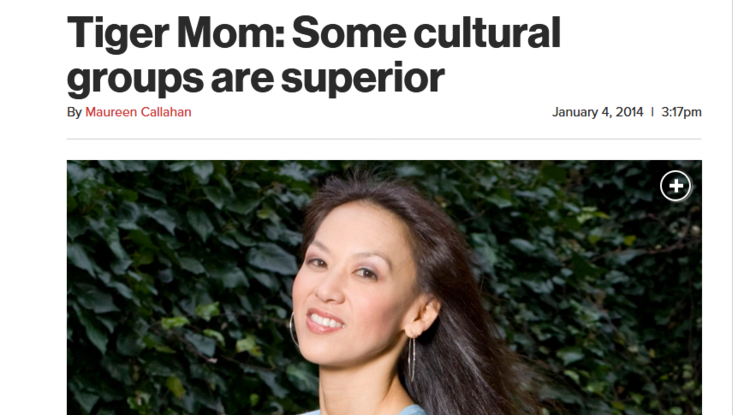 The New York Post is mad at Amy Chua 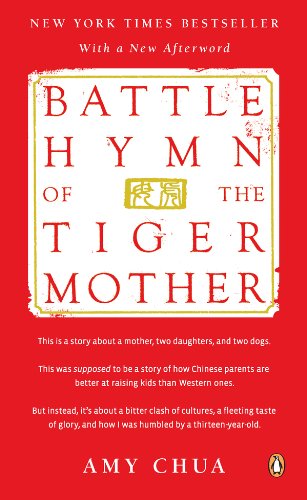 "Tiger Mom" Amy Chua is known for claiming that Chinese women make the best mothers, but now she and her husband say that some groups are just plain better than others.

Amy Chua, the self-proclaimed “Tiger Mom” who, in 2011, published a book arguing that Chinese women are superior mothers — thus their offspring superior children — has even more to say.

In “The Triple Package,” Chua and her husband, co-author Jed Rubenfeld, gather some specious stats and anecdotal evidence to argue that some groups are just superior to others and everyone else is contributing to the downfall of America.

Unsurprisingly, the Chinese Chua and the Jewish Rubenfeld belong to two of the eight groups they deem exceptional. In no seeming order of importance, they are:

And what about looking back in time? Christian Scientists are fading, but they did extremely well for themselves for a long time. If you go back to 1900, Scots dominated much of business in the U.S. and Canada. Mark Twain's long 1898 article praising Jewish business acumen mentions that of course the one place Jews can't compete is Scotland: "There are a few Jews in Glasgow, and one in Aberdeen; but that is because they can't earn enough to get away."

These groups — “cultural,” mind you, never “ethnic” or “racial” or “religious” — all possess, in the authors’ estimation, three qualities that they’ve identified as guarantors of wealth and power: superiority, insecurity and impulse control.

“That certain groups do much better in America than others — as measured by income, occupational status, test scores and so on — is difficult to talk about,” the authors write. “In large part, this is because the topic feels so racially charged.”

And so begins their cat-and-mouse polemic, in which they claim they’re courageously agitating for a greater good: the revival of America itself as a “Triple Package Culture.” It’s a series of shock-arguments wrapped in self-help tropes, and it’s meant to do what racist arguments do: scare people.

Chua, a law professor at Yale, became a media sensation in 2011, when The Wall Street Journal published an extract from her book “Battle Hymn of the Tiger Mother.” She herself is an American, raised in the Midwest, but she used her heritage and all the worst stereotypes of Chinese women — cold, rigid Dragon Ladies, hostile towards their own children — to criticize the Western way of parenting, which she also said would be the downfall of America.

Chua made waves with “Battle Hymn of the Tiger Mother,” but she makes even more outrageous claims in her new book.

... Her book really can be reduced to a simple argument: Chinese mothers are better than those of any other race, and these parenting methods are going to result in the West’s big fear — the continued rise and ultimate supremacy of China. Chua’s book was a best-seller, so it’s little surprise she’s back with an even more incendiary thesis, one so well timed to deep economic anxiety, to the collective fear that the American middle class is about to disappear, for good, and the misguided belief that immigration reform will result in even less opportunity for Americans than there is now.

You mean, some people suspect Schumer-Rubio isn't the cure for whatever ails us?

She and Rubenfeld stoke those fears. “Although rarely mentioned in media reports,” they write, “the studies said to show the demise in upward mobility largely exclude immigrants and their children.”

Yet the authors do not mention whether these immigrants are low-wage workers who have a greater chance at upward mobility, and the Pew study they cite is from 2007 — one year before the global financial collapse, resulting in an American economy that may be structurally altered for decades to come.

All of the groups profiled by Chua and Rubenfeld are done so only as American immigrants, with the exceptions of Mormons and Jews, who are superior to Catholics, Protestants, Buddhists, atheists and Muslims — the latter group, it seems, too controversial to warrant a mention.

On to the distinguishing factors that make these eight groups the best in America:

Any group that collectively believes they are inherently better than any other, say the authors, has an advantage. They do not note that this is perhaps humanity’s oldest and ugliest flaw, the bottom-line cause of wars and genocide. In their estimation, it’s not nearly common enough in America, where “the Superiority Complex . . . is antithetical to mainstream liberal thinking . . . the stuff of racism, colonialism, imperialism, Nazism.” This way of thinking, they write, has been a big boon to Mormons and Jews, though they also fail to note that believing in the superiority of a belief system is the driving force behind almost all organized religion. (Except the Amish. The authors freely note that the Amish are losers for this very reason.)

I was surprised to see driving through Amish country last summer that the Amish aren't anywhere near as poor as I expected.

Yet another hallmark of self-help, impulse control is considered to be a key factor in personal success — the ability to delay instant gratification in the service of a greater goal. But this isn’t really what the authors have in mind: “As we’ll use the term,” they write, “impulse control refers to the ability to resist temptation, especially the temptation to give up in the face of hardship or quit instead of persevering at a difficult task.”

You know who’s bad at this? Americans not among their eight groups. “Because all three elements of the Triple Package run so counter to modern American culture, it makes sense that America’s successful groups are all outsiders in one way or another,” they write. “Paradoxically, in modern America, a group has an edge if it doesn’t buy into — or hasn’t yet bought into — mainstream, post-1960s, liberal American principles.”

As curious as the groups that Chua and Rubenfeld elevate are the absence of ones they denigrate. Aside from the Amish (not big book-buyers), the only other group the authors take aim at are the Appalachian poor, noting, without irony, that “it’s far more socially acceptable today to insult and look down on ‘white trash’ than the poor of any other racial group.’”

As for why African-Americans don’t make the list, the authors believe that the Civil Rights Movement took away any hope for a superiority narrative, and so the black community is screwed — even as they cite Mitt Romney’s loss to Barack Obama as evidence of Mormon ascendancy.

“In this paradoxical sense, equality isn’t fair to African-Americans,” they write. “Superiority is the one narrative that America has relentlessly denied or ground out of its black population.”

Nigerian immigrants, they argue, are bolstered by the belief that they are better than other West Africans

— much as the Lebanese believe, as descendants of Phoenicians, that they are superior, or that the Chinese believe that their 5,000-year-old civilization makes them superior. But feeling superior to other nations, races or religions is nothing more than that — a feeling.

The authors have such dubious data — “getting a statistical fix on Mormon income and wealth is notoriously difficult”; “hard numbers, however, are surprisingly hard to come by” — that they undermine every assertion of so-called “cultural” supremacy.

The real story here — the less controversial one, the more interesting and possibly instructive one — is that historically, immigrant groups tend to experience upward mobility in America until the third generation, and then, for reasons unknown, tend to level off. It’s interesting, too, that the authors either dismiss or outright ignore the large swaths of immigrant groups who built up this country — the English, Irish, Italians, Germans, Eastern Europeans. They ignore two very basic explanations for the success of immigrant groups in America: Anyone who leaves their homeland for parts unknown, no matter how desperate, is, by definition, bold; America’s uniqueness as a nation founded by immigrants.

Or maybe having a whole bunch of nice land with only some tubercular Indians on it ...

Once we were a Triple Package nation, say the authors, but no more. We have been done in by our superiority complex, our poor, Western-style “self-esteem parenting” and lack of impulse control.

The question they finally pose — Should America be a Triple Package country again? Can it? — is followed by a paragraph-long, yes-no-maybe answer that will give you whiplash.

Today, the demographic predicted to have the greatest impact economically, politically and culturally, by the year 2042, are Hispanics. Just don’t tell the Mormons or the Jews.

Hispanics in Los Angeles can't even muscle their way in to jobs as gaffers, key grips, and best boys. Do you really think they'll be running the media by 2042?