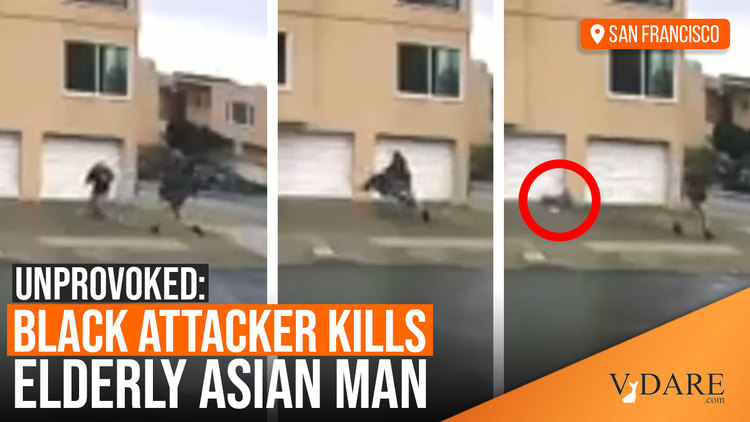 Even When Reporting An Anti-Asian Hate Crime, SFGATE Won't Say The Attacker Is Black

Earlier (March, 2020) Black Who Attacked Asian In SF Gets Chesa Boudin's "Restorative Justice" Instead Of, You Know, Justice

An elderly San Francisco man was killed in a 'brutal' attack. His family says it was a racist act., SFGATE, February 2, 2021

The family of the 84-year-old San Francisco man killed in a seemingly random attack believes it was a racist act.

Vicha Ratanapakdee, a Thailand native who his family says emigrated to America to live with his daughter and son-in-law, died days after the Thursday morning attack.

His daughter, Kim Ratanapakdee, told KTVU that her father was targeted because he was an elderly Asian man. She added that she has received racist harassment and verbal abuse since the beginning of the pandemic.

"For [the suspect] to come from all the way across the street," son-in-law Eric Lawson said in an interview with KTVU, "what else could have motivated him?"

In an alarming video, Watson can be seen running across the street in San Francisco's Anza Vista neighborhood, then shoving Ratanapakdee to the ground. Watson then flees the scene. [More]

So even when reporting a hate crime AS a hate crime, Bote can't bring himself to say that the attacker was black, as shown by the video.

I haven't found mugshots of him online, and I don't know what the race of Maylasia Goo, who did not take part in the attack and seems to be Antoine Watson's girlfriend is.

Soros-funded DA Chesa Boudin, whose soft-on-crime policies have helped create a rise in black crime, made this statement:

"I send my deepest condolences to the Ratanapakdee family for their loss. This was a brutal, random, unprovoked attack," he said in the statement. "My heart is also with the entire AAPI community for the pain they’re experiencing as a result of this tragedy and too many others over the past year."

One of the others was a brutal but non-fatale black-on-Asian hate crime attack (quote from attacker: "I hate Asians.") in which DA Boudin dropped all charges, preferring to pursue what Leftists call "restorative justice".[SF DA withdraws charges in attack on elderly man, chooses ‘restorative justice’ model instead, KTVU.com, March 3, 2020]

The killing of Vicha Ratanapakdee is a predictable result.