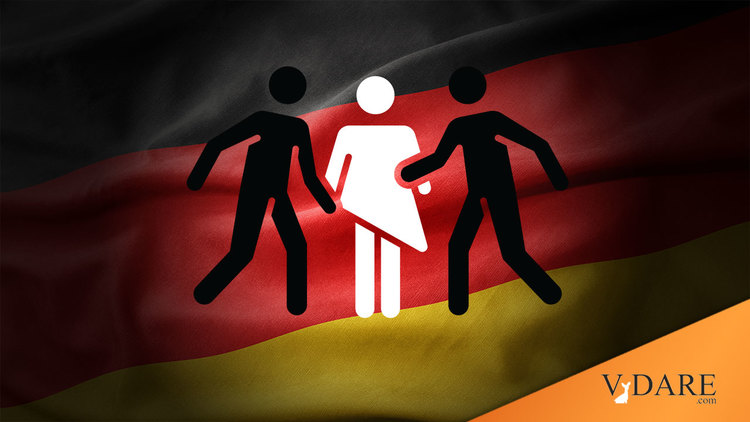 Responding to the Cologne New Years attacks, sensible women are reacting to the New Normal of greatly reduced public safety by purchasing pepper spray — lots of it. An RT video report notes, “One shop in the city of Cologne says it has completely sold out of pepper spray and it is mostly women who are buying it.” Too bad the segment had to end up by showing a Syrian alien whining about the Cologne attacks that “in Syria I don’t know people who could commit anything like that” — while there are clearly many who can.

Geert Wilders, the Dutch member of Parliament and leader of the Freedom Party, has some experience with defense against Islamic violence, having been on the hit list of jihadists since he became outspoken about the danger of Muslim immigration.

Below, Wilders posed with a local SWAT team when he spoke at the Mohammed cartoon contest in Garland, Texas. After Wilders left, the free speech event was attacked by two armed jihadists who were taken out by a Garland police officer with his service revolver. 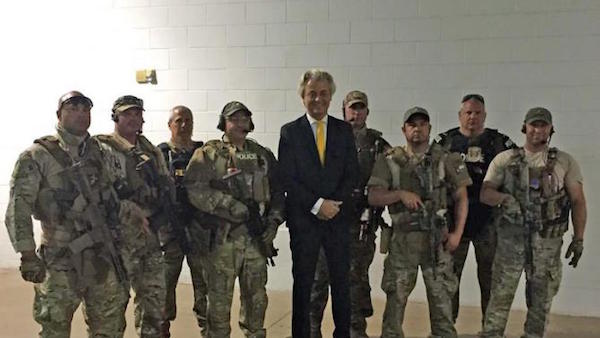 Along with other words of the Islamist vocabulary we never wanted to learn, along with jihad and hijra, we must now add Taharrush, meaning group sexual assault condoned by Allah. Geert Wilders explains the ugly details in a recent opinion piece:

Give Women the Right to Defend Themselves, January 13, 2016

Today, The Post Online published an op-ed piece by Geert Wilders and Machiel de Graaf. Click here to read the piece at TPO.nl (in Dutch)

“Cultural enrichment” has brought us a new word: Taharrush. Remember it well, because we are going to have to deal with it a lot. Taharrush is the Arabic word for the phenomenon whereby women are encircled by groups of men and sexually harassed, assaulted, groped, raped. After the Cologne taharrush on New Year’s Eve, many German women bought pepper spray. Who can blame them?

A culture that has a specific word for sexual assaults of women by groups of men is a danger to all women. The existence of the word indicates that the phenomenon is widespread. Frau Merkel, Prime Minister Rutte and all the other open-door politicians could and should have known this.

The hadiths, the descriptions of the life of Muhammad, the ideal human being whose example all the Islamic faithful must follow, confirm that women are sex objects, that they are inferior beings like dogs and donkeys, and that there is nothing wrong with sexual slavery and raping female prisoners.

Taharrush is quite common in Islamic countries. Women are frequently surrounded by men and subsequently abused. The Egyptian website Jadaliyya points out that it also happens to veiled women. Women are victims simply because they are women and not because they have provoked the men by their conduct or “provocative” clothing. It can happen in the streets, public transport, supermarkets, or during protest demonstrations.

In 2011, the American television journalist Lara Logan had her clothes ripped off and “was raped with the hands” by a group of 200 men on Tahrir Square in Cairo. Two years later, a young Dutch woman became a taharrush victim at the same square. Now, along with the flow of migrants from the Islamic world, the phenomenon also reached Europe. The elite tried to keep it hidden from the people, but they cannot do so anymore.

Cartoonists in the West already experienced Islamic killers coming to their front door if they dare to draw Muhammad. Now, thousands of women in Cologne and dozens of cities in Germany and elsewhere in Europe, such as Zurich, Stockholm, Malmo, Vienna, experienced rapists standing behind the door if they dare take to the streets.

Islam means submission. And there is a good reason for it. The arrival of Islam has led to the curtailment of Western freedoms under the threat of violence. And this threat will only increase. It is an insidious process until the whole West submits to Islam.

Last week, the Mayor of Cologne advised her female citizens to keep strange men at an arm’s length. In Vienna, the head of the police said that in future women better not walk the streets alone. It seems that Austria will soon resemble Saudi Arabia, where women are not allowed alone in the streets. Earlier, in the Netherlands, women from families hosting asylum seekers had already been advised to wear “appropriate” clothes (even indoors), “so no prom dress or bare shoulders,” and to ensure that they are never alone in the room with male asylum seekers.

But the behavior of women has nothing to do with it.

Moreover, it is a disgrace that our women are advised to modify their behavior because the government has invited thousands of dangerous men into our country. When one imports Islam in the Netherlands, one also imports the misogynistic culture of Cairo, Damascus, Riyadh into our cities. Next to headscarves, burkas, mosques, honor killings, and terrorism, we now have taharrush.

The solution is not that our women keep an arm’s length from the male barbarians, but that the government keeps these men thousands of kilometers away from us. Until that happens, other measures are needed. It is irresponsible to turn our country into a jungle and subsequently send women unarmed into the jungle. They must at least have the right to defend themselves. Contrary to countries such as Germany and France, in our country it is illegal to carry pepper spray. With the Netherlands now being overrun by men who see women as inferior sex tools, it is time to legalize pepper spray in the Netherlands as a weapon against taharrush.

Geert Wilders is a member of the Dutch Parliament and leader of the Party for Freedom (PVV). Machiel de Graaf is a parliamentarian for the PVV.