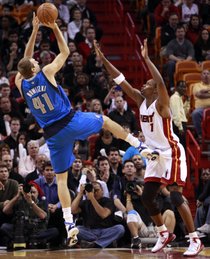 My upcoming VDARE article is about the NBA finals between the Miami Heat's Big Three of LeBron James, Dwyane Wade, and Chris Bosh versus the Dallas Maverick's Big One of Dirk Nowitzki, but I finally found a picture to illustrate why the seven-foot German's fall-away jumper is so hard to block.

If you are going to push off one foot while hurling a ball overhand, whether shooting a basketball or throwing a baseball, the natural combination is right hand / right foot. During Nowitzki's career, however, this righthander developed a a radically different shot where he takes a step back with his left foot and then jumps off his "wrong" (left) foot.

The big advantage in leaping off the left foot, I believe, is that Nowitzki can simultaneously raise his right leg as a shield to keep the defender farther away.

This picture, where the non-jumping defender, 6'11" Chris Bosh, is almost getting kicked in the groin by Nowitzki, represents an extreme example—normally the defender leaps and Nowitzki keeps his knee bent more, his foot down, and his right leg more perpendicular to the flight of the ball so he doesn't get called for an offensive foul—but the general principle is the same: Nowitzki's raised right leg keeps the defender too far away too block the shot.

Say you release your shot right-handed from above your right ear. If, like a normal shooter, you jump off your right foot, you could try raising your left leg as a shield, but to get it in front of you where it's effective, you have to twist your body more unnaturally than when Nowitzki jumps off his left foot and raises his right leg. (Try it.)

Somebody must have tried shooting like this in the past, right? But I can't find any mention of it. Is it just too hard for most people to do accurately? Do you have to be kind of ambidextrous? Or do you just look too gawky doing it for it to be cool in America? Has anybody started to imitate Nowitzki? He's been hugely effective doing this. (Of course, just because a shot is effective doesn't mean it will be imitated—Kareem Abdul-Jabbar poured in about a million skyhooks on TV between 1966 and 1990 and the rest of basketball treated the shot as if Kareem has the intellectual property rights to it tied up until 70 years after his death.)

Interestingly, Nowitzki says he came up with this shot on his own, not with his off-season coach, physicist Holger Geschwindner,

From an interview with Geschwindner on the unusually high arc on Nowitzki's shots:

The reflection behind it is quite simple. How do you have to throw the ball so that, despite committing as many mistakes as possible, it still finds its way through the net? It's a question of error tolerance. But every college student should be able to make the same calculations. Take differential and integral calculus. Make some derivations and create a curve. Everybody can do it. It's no secret. The optimal angle depends on the player's height and the distance. I've calculated it for Dirk and my other players.

My impression is that European basketball players have generally been more creative than American players. This goes back to the first European I can recall, BYU center Kre??imir C'osic' of Yugoslavia, who battled Bill Walton of UCLA in the NCAA tournament in the early 70s. Walton was an amazing basketball thinker, but the big Croatian made him look like a stick-in-the-mud when it came to on-court weirdness.

I'm certainly not up to date on basketball, but my impression is that the 1970s conventional wisdom of black players as innovative and white players as fundamentalist was already outdated by the 1990s, partly because of the arrival of weird Europeans, partly because blacks got much better at fundamentals, partly because white Americans got increasingly winnowed down to the ones who had something extra in their repertoire (not just Larry Bird—anybody remember Jeff Hornacek and all the bizarre-looking shots he took?)

Forty years ago, Earl Monroe was doing all sorts of crazy spin moves, but I don't see that much statistical evidence they were overwhelmingly effective, which is why he remains a legend—he didn't have that many successful followers. Moving laterally along the court in unexpected ways is cool, but it's mostly a distraction from moving up and at the rim. I watched a lot of Michael Jordan and, sure, he had a lot of "How did he do that?" plays, but not as many "How did he think of that?" ones. Jordan's game was fundamentally sound and (until, after his baseball exile, when he developed an effective fall-away jumper to save his body), his predominant instinct was the predictable but most rational one: to head for the rim.