Middle Easterners continue to invade Europe en masse to grab a First-World lifestyle or for the purpose of future jihad attacks. In world history, 2015 will be remembered as the beginning year of Europe’s great demographic replacement. These days, the invaders don’t pretend to be poor war-fleeing refugees, if they ever did, although some of the hordes come from a Syria, a place where war is actually going on.

Above , invasive young men demand the border be opened or else some infidels will die.

Clearly there was never a Muslim counterpart to Dale Carnegie, who wrote “How to Win Friends and Influence People.” Muslims don’t respond well to “No.”

As a reminder of what real refugees look like, here are some Belgian war refugees in 1945. 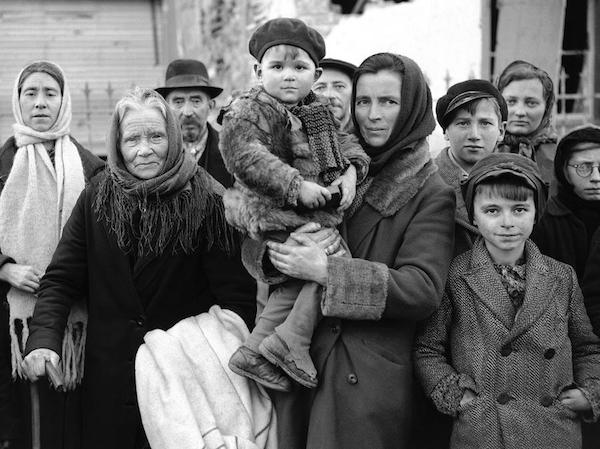 What’s happening is that Europe is trying to exercise a tiny bit of border control now after the big Free Stuff invitation went out across the third world months ago. Europe will need more than a few local cops to hold back the tide that has been building. Did the elites in Berlin and Brussels not understand that millions would come?

MIGRANTS attempting to march across Europe have been waving placards saying ‘open or die’ after being stopped by closed borders and barbed wire.

A group of men waving the menacing home-made banner grew angry as they were stopped in their tracks at the border between Macedonia and Greece.

Macedonia is the latest country to erect a border fence.

The tiny, landlocked state has begun building a fence along its border with Greece, blocking a key transit route for migrants travelling from Turkey to northern and western Europe.

Macedonia insists it will allow those fleeing war-zones to continue to pass through, meaning people fleeing from Syria, Afghanistan and Iraq can continue to cross.

The UK is well-known to feature among the most favoured destinations for migrants from Africa and the Middle East because of Britain’s extensive benefits system and ready availability of work.

But many others, including Iranians, Moroccans, Pakistanis and Eritreans will have their journey’s halted.

The group clashed with authorities after being told they could not pass through the border.

Greek riot police struggled to maintain order and at least two people were injured on Thursday at the border as hundreds of people rejected by Macedonia clashed with the Syrians, Afghans and Iraqis who have been given the green light to cross the border.

Despite using tear gas, 150 riot police on the Greek side near the village of Idomeni failed to budge a small group of mainly Iranian migrants – some holding small children – who set up barricades to prevent refugees from entering Macedonia.

Tired of waiting, thousands of refugees then broke through a Greek police cordon, surging to the Macedonian border, which immediately closed again.

Earlier, police had distributed fliers warning the economic migrants that they must leave the border area within three days, and the government implied it would take more drastic action if necessary.

Police say about 6,000 people are stuck at Idomeni, sleeping in a shelter provided by charities, in hundreds of tents or in the fields.

About 3,500 are Iranians, Pakistanis and other nationalities not allowed in by Macedonians, while the rest are from Syria, Afghanistan and Iraq.

At the same border, a man believed to be from Morocco was fatally electrocuted after touching high-power railway cable when he climbed on top of a train, prompting cries of Allahu akbar, or “God is great”.

The clashes came as Greece faces mounting pressure from its EU partners to ensure better control of its borders and register arriving migrants or face the prospect that passport checks could be reintroduced for Greek citizens in Europe.

More than 600,000 migrants have flooded into Greece this year, many fleeing conflict in Syria or Iraq.

Ioannis Mouzalas, Greece’s minister for migration policy, said his country was not to blame for the flow of migrants.

He said: “Greece is the start of the corridor. The door is in Turkey. Therefore if the flows are not controlled in Turkey, from the coast of Turkey, it is impossible to control the flows from Greece or any other European Union member.”