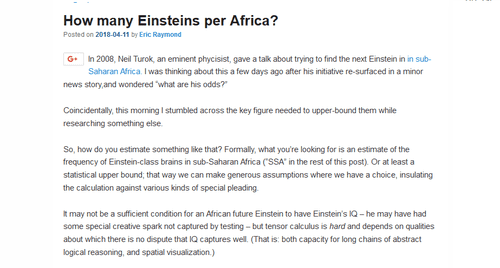 Eric S. Raymond Asks "How many Einsteins per Africa?" Answer—Not Very Many! 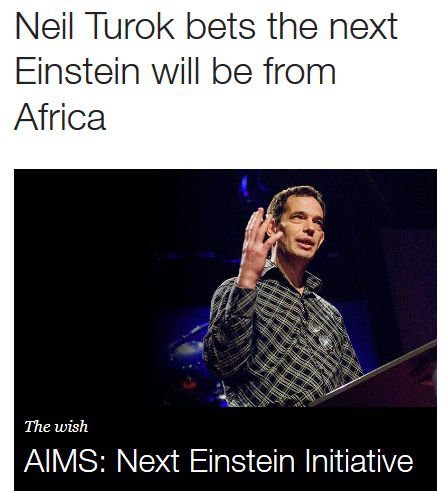 Libertarian computer guru Eric S. Raymond asked the question recently: How many Einsteins per Africa? [Armed and Dangerous, May 11, 2018]G

In 2008, Neil Turok, an eminent phycisist, gave a talk about trying to find the next Einstein in in sub-Saharan Africa. I was thinking about this a few days ago after his initiative re-surfaced in a minor news story,and wondered “what are his odds?”

Coincidentally, this morning I stumbled across the key figure needed to upper-bound them while researching something else.

It's Lynn and Meisenberg's The average IQ of sub-Saharan Africans: Comments on Wicherts, Dolan, and van der Maas. [Intelligence, Jan/Feb 2010] and it gives the average IQ of sub-Saharan Africans as 68. If you take the billion or so Africans, plug in a table of IQ percentages and rarities, and assume Einstein only had an IQ of only 160 you get a theoretical possibility of, according to Raymond, 4.9 Einsteins per Africa.

But...as Raymond goes on to point out, this goes lower if you assume an Einsteinian IQ of 175.

Raymond points out that one way to increase the possibility of an African Einstein would be to attack malnutrition in Africa, which is part of the cause of low African IQs. In 2004, Steve Sailer suggested in an article called  IQ: The Truth Can Set Us (And Africa) Free, that the UN help Africa with micronutrients.

But the point of Steve's article, and what's slightly startling about Raymond's article, is that everyone is supposed to assume that all populations have equal average IQs, and if they believe differently, they're supposed to be demonized and fired from their jobs (Derbyshire, Watson, Richwine, et cetera.) Neil Turok's "bet" is based on the enormous number of people in Africa--with no allowance for quality.

If Raymond, instead of being a financially independent software type, was a college professor or journalist, he could be demonized and driven out of his job for the boldfaced words in the last sentence of his post:

Of course, one Einstein can make a continent-sized difference. I wish Neil Turok the best of luck finding him or (though less likely) her.

That's what got James Damore!