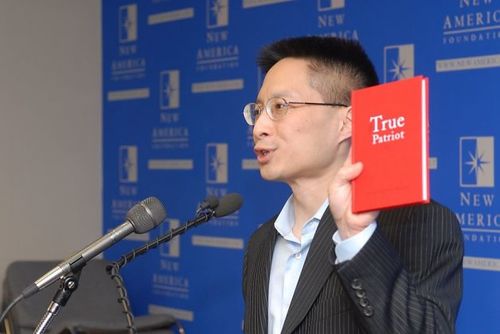 I was amused to see Eugene Gant's "Chinaman" piece decorated with a picture of one of Eric Liu's books.

Way back in 1998 I reviewed Liu's first book The Accidental Asian.  From my review: 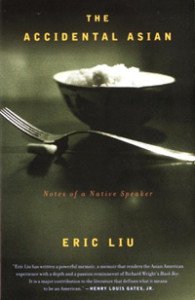 This is the second autobiography I have read recently. The other was Crossing the Line, by Alvin Kernan, an account of the author's service in the U.S. Navy during WW2, after growing up on a remote ranch in Wyoming. His book and Eric Liu's have some things in common. They are both decently well written (though Mr Liu has a regrettable tendency to lapse into Creative Writing: "I am bathed in yellow light …" yada yada). Both stop in the author's twenties: Kernan's because that is the end of the part of his life that he judges other people might find interesting, Mr Liu because that is as far as he's got — no doubt he will have much, much more to tell us as soon as he has finished law school. Yet two books more different in spirit could hardly be imagined. Kernan endured much and saw great horrors. Liu has endured little out of the ordinary, and seen less.

That is not his fault, and in fact he seems to me a likeable guy, with whom I should not mind spending some time — half an hour, perhaps. It is just that we live in an age when the sterner virtues are not much called for, and hedonism and narcissism, and the stirring up of rancor over imagined grievances, and the parading of manufactured emotions and try-it-out "lifestyles," and all the vapid babble of fashion and celebrity and "cool" and "identity" are what fill the marketplace. This is depressing for those of us who think that life is a serious business, that words have meanings and ideas matter, but it is bonanza time for people like Eric Liu. He will be a very successful lawyer.

In fact Liu did not pursue lawyering as a career, continuing on the path of race-grievance entrepreneurship instead.

To judge from his Amazon page, Liu seems to divide his time between opinionating as a sort of Chinese Ta-Nehisi Coates—a choppety-chop counterpoint to Coates' blackety-black, as it were—and writing motivational books for airport bookstalls.

Good luck to him.  The U.S.A. has far too many lawyers already.