Engineering Jobs For Navajos Only

The Arizona Republic newspaper had a few job ads in the Help Wanted section that really grabbed my attention. The job ads were placed by a public utility in Arizona called the Salt River Project (SRP).

Online versions of the ads are copied below. You can view a scanned newspaper copy of one of the ads that was for an Electrical Engineer here: 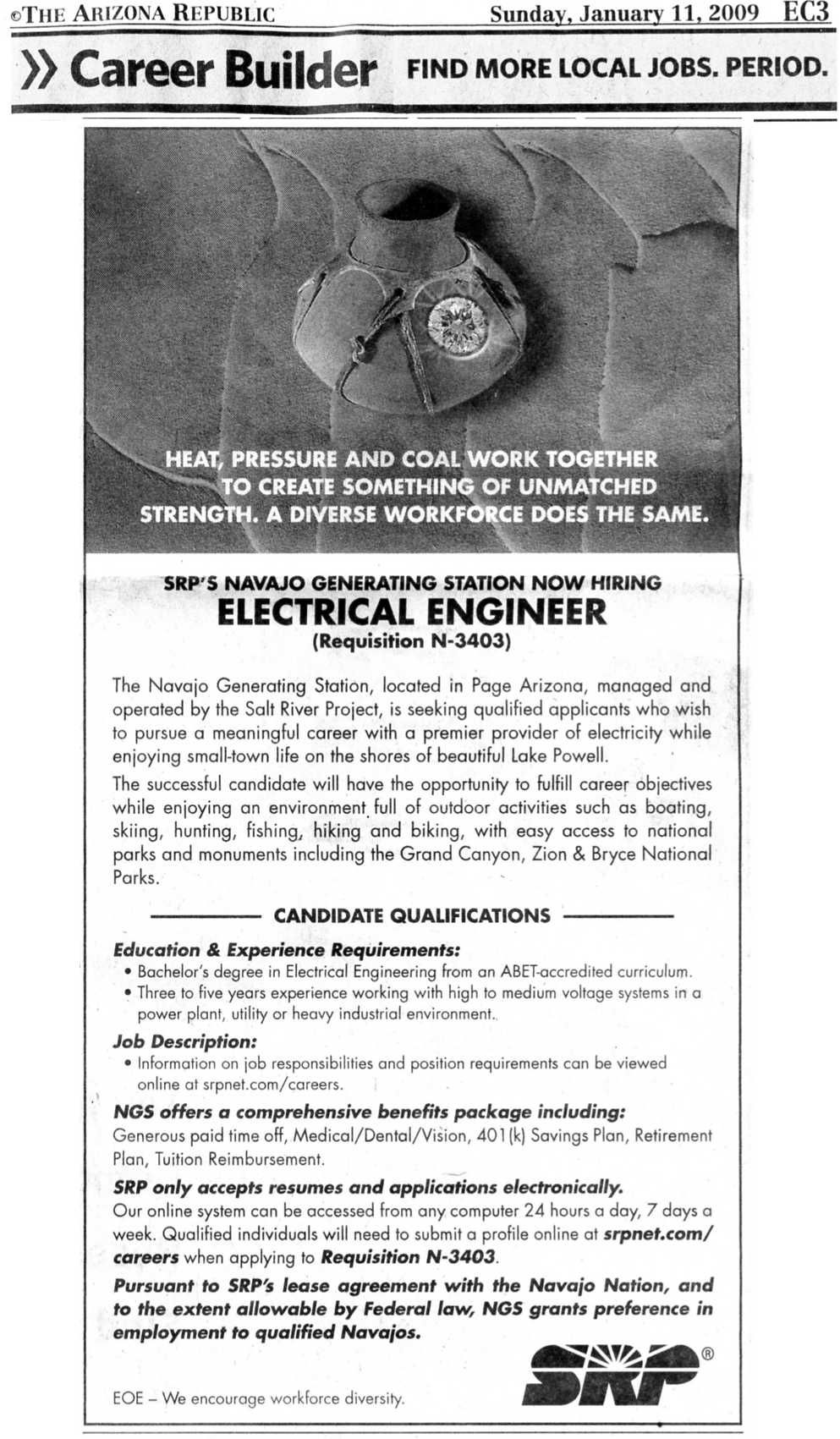 All three ads were quite artistic—notice the Indian pottery at the top of the ad. The art isn't what caught my attention however!

Towards the bottom of each ad there is a terse statement that specifies that preference will be given to Navajo Indian applicants.

Pursuant to SRP's lease agreement with the Navajo Nation, and to the extent allowable by Federal law, NGS grants preference in employment to qualified Navajos.

That last line reads like a sick joke because one thing they are not is an equal opportunity employer.

The job ad struck me as kind of peculiar because it implies that Federal law allows Navajo Indians to discriminate against non-Indians and Indians from other tribes. After researching this issue for awhile I learned that not only do Navajo Indians have the right to discriminate in hiring decisions, so do most other Indian tribes. Continue reading to learn how they can get away with such blatant discriminatory hiring practices.

In order to understand why a public utility like SRP is required by the Navajo Nation to discriminate against non-Indians in its hiring, a little background is needed. The SRP owns the Navajo Generating Station in Northern Arizona. It is a coal-fired electric generation plant that supplies electricity to the cities of Phoenix, Tucson, Los Angeles, and to Nevada. Plant operations are subject to Navajo law because it is located on tribal grounds, and the coal is supplied by Peabody Western Coal Company which mines its coal on Navajo territory. Peabody, like SRP, is under similar constraints to hire Navajo Indians.

Indian reservations are sovereign nations and can therefore make their own laws, subject to federal laws that override their authority. Many Indian tribes have provisions for "preference hiring" in their tribal laws. Preference hiring requires employers on Indian territories to discriminate in favor of Indians. The Navajo Nation's hiring manualÂ  has this item:

Whenever necessary, departments and programs may offer preference in employment to other applicants based on funding source requirements, —— however, —— in no case may this preference supersede Navajo preference.

Preference hiring laws are backed up by federal laws, as explained on the EEOC website:

Section 703(i) of Title VII of the Civil Rights Act of 1964, as amended, 42 U.S.C. ? 2000e-2(i)(1982), provides an exception to Title VII? general nondiscrimination principles allowing certain employers under certain circumstances to exercise an employment preference in favor of American Indians

The following excerpt is particularly interesting because it confirms that employers like Peabody are none too happy about having to limit their pool of labor to Navajo Indians. In the lawsuit, Peabody Coal and the EEOC tried to prevent Navajo preference hiring. A supermarket chain called Basha's joined the lawsuit because one of the Basha's stores located on the Navajo Nation was prevented from hiring two Hopi Indians.

The contract between the Navajo Nation and Peabody contains a provision requiring Peabody to give hiring preference to Navajos. This provision was approved by the Secretary of the Department of Interior but became the subject of a federal district court challenge when the U. S. Equal Employment Opportunity Commission (EEOC) sued Peabody over its hiring preference. The case was dismissed from the U. S. District Court because the Navajo Nation was an indispensable party to the case and the EEOC did not have the power to compel the Navajo Nation to be a party to the lawsuit. The EEOC appealed the lower court decision to the Ninth Circuit Court of Appeals and they overturned the lower court finding that the Navajo Nation can be sued, using a procedural legal device called a joinder. [Attorney General Madrid Files Brief in U.S. Supreme Court to Protect Navajo Nation Sovereignty, PDF]

As stated earlier, many Indian tribes have the right to discriminate against anybody they wish as long as the job is on Indian tribal territory. Take Cherokees for example:

The Eastern Band's law is a combination of Indian and regional preferences. First in line for recruiting, training and employment are enrolled Eastern Cherokees, then spouses, parents or children of enrolled members. Other Native Americans, followed by people from the local community and then others from the region and the state come next.Â  [Court throws out suit challenging Indian preference, Indianz.com, April 28, 2006]

There is more to this than meets the eye. Americans who are non-Indian may get consideration but only after Cherokees and then other Indian tribes are considered first. Cherokees have no provisions for hiring guest workers from outside the United States!

There have been many lawsuits that challenged Indian preference hiring but so far they have all failed. The EEOC argued that a tribal-specific employment preference is contrary to the law and intended to force the Navajos to revoke its preference policy. The challenge failed and was appealed all the way to the Supreme Court, who ruled in favor of the Navajo Nation.

New Mexico Attorney General Patricia A. Madrid filed an Amicus Curiae "friends of the court" brief to the SCOTUS appeal that said:

"My office and that of six other states believes that what is happening in the Peabody Western Coal lawsuit is in danger of violating the sovereignty of the Navajo Nation."

It's very important to notice that one of the chief arguments used for the Navajo nation is that hiring foreigners (anybody who lives outside of the reservation) could degrade the sovereignty of the Navajo Nation.

Sovereignty arguments have been used by many Indian tribes to defeat challenges to preference hiring.

It seems to reason that if non-tribal workers from outside of the reservation could degrade the sovereignty of the Navajo Nation the same should be true when foreign workers are allowed into the U.S. Preserving sovereignty is a compelling argument but it lands on deaf ears whenever activists have tried the same argument against allowing guest workers like H-1B/H-2B/L-1 into the U.S.

So far the Navajos are winning these types of lawsuits. The EEOC and many other employers have tried to force the Navajo nation to hire non-Navajos but it's a losing battle because, as New Mexico attorney general Patricia Madrid wrote: Congress "expressly disallows the EEOC from suing a government, such as the Navajo Nation or the State of New Mexico or any of the individual States of the Union."

Before we shed crocodile tears for SRP or Peabody, or even the Basha's supermarket chain, let's keep in mind that Basha's has a bad reputation for union busting and the hiring of illegal aliens. SRP hires large numbers of H-1Bs and in 2004 the utility actively lobbied with the Arizona Chamber of Commerce to expand the H-1B program. Discrimination in the hiring of engineers at SRP's Navajo Station happens because Navajo Indians don't want non-Navajos taking jobs away from their own people. Off the reservation SRP has shown they are willing to discriminate against American citizens by hiring H-1Bs from places like India. Perhaps we could learn something from the Navajos about doing what's best for their own people.

Addendum: Last Sunday's help wanted section had four job ads for computer IT, one of which was an obvious green card certification, and four for engineering. This is for the entire Phoenix metro area and Maricopa County with a population of about 4 million people.