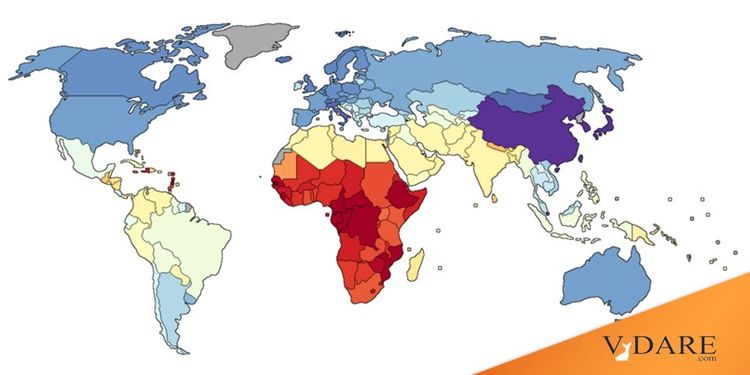 Emil Kirkegaard And George Francis On The IQ Of Nations

Since Lynn and Vanhanen’s book IQ and the Wealth of Nations (2002), many publications have evidenced a relationship between national IQ and national prosperity. The strongest statistical case for this lies in Jones and Schneider’s (2006) use of Bayesian model averaging to run thousands of regressions on GDP growth (1960-1996), using different combinations of explanatory variables. This generated a weighted average over many regressions to create estimates robust to the problem of model uncertainty. We replicate and extend Jones and Schneider’s work with many new robustness tests, including new variables, different time periods, different priors and different estimates of average national intelligence. We find national IQ to be the “best predictor” of economic growth, with a higher average coefficient and average posterior inclusion probability than all other tested variables (over 67) in every test run. Our best estimates find a one point increase in IQ is associated with a 7.8% increase in GDP per capita, above Jones and Schneider’s estimate of 6.1%. We tested the causality of national IQs using three different instrumental variables: cranial capacity, ancestry-adjusted UV radiation, and 19th-century numeracy scores. We found little evidence for reverse causation, with only ancestry-adjusted UV radiation passing the Wu-Hausman test (p < .05) when the logarithm of GDP per capita in 1960 was used as the only control variable.

Each author did his own easier-to-read blog post summary. Here’s Emil Kirkegaard’s.

If you have heard of national IQ before then you have probably seen something like the graph below. National Intelligence has an extremely strong association with GDP per capita – roughly 70% of the variation in the wealth of nations can be explained by IQ alone. In fact, it has a very strong relationship with pretty much every national indicator for success.

Countries above the line, such as Qatar, Ireland, Luxembourg, or Singapore have higher per capita GDPs than their national average IQ would predict, while those below the line (such as Cambodia, Vietnam, Mongolia, and China) have lower actual GDPs than predicted by the IQ model.

Which set would tend to be better long-term financial investments?