So, the welfare queen Elon Musk has quit two advisory councils serving President Trump.  This is quite rich for Musk, whose sales of Tesla cars tank once subsidies are withdrawn.

Elon Musk is breaking his ties with the White House now that President Donald Trump has said he will pull the US out of the Paris Agreement on climate change.

The Tesla and SpaceX CEO said on Wednesday that he would have "no choice" but to leave the two advisory councils he sits on if the US withdrew from the landmark climate deal — a commitment he reiterated on Thursday after Trump made the announcement.

Tesla is the most heavily subsidized automobile on the market— it has no market without tax subsidies.

According to the latest data from the European Automobile Manufacturers Association (ACEA), sales of Electrically Chargeable Vehicles (which include plug-in hybrids) in Q1 of 2017 were brisk across much of Europe: they rose by 80% Y/Y in eco-friendly Sweden, 78% in Germany, just over 40% in Belgium and grew by roughly 30% across the European Union… but not in Denmark: here sales cratered by over 60% for one simple reason: the government phased out taxpayer subsidies.

As Bloomberg writes, and as Elon Musk knows all too well, the results confirm that “clean-energy vehicles aren’t attractive enough to compete without some form of taxpayer-backed subsidy.”

From hero to zero, in just one month.

Hong Kong has long been a hotbed for electric car sale, driven mostly by incentives, but what happens when those incentives vanish – almost doubling the cost of a new EV in some cases overnight? EV sales disappear….completely.

In March 2017, electric car sales in Hong Kong stood at 2,964 units. Come April, sales dropped to zero units. This was exactly as we had predicted when news first surfaced of the incentives being slashed. 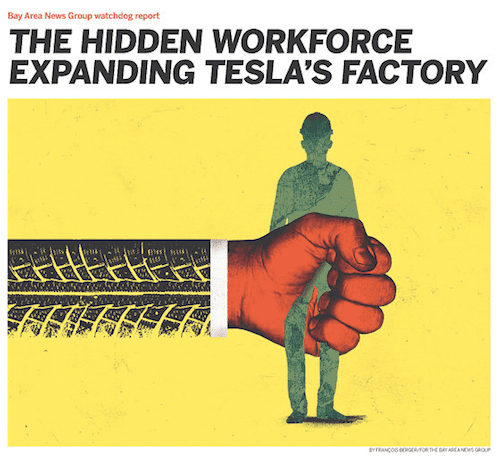 And Tesla has yet to be held accountable by the Department of Justice for illegally importing Eastern European low wage laborers to build their Fremont, CA, Tesla plant.

The piece details how companies use the various visa-laundering companies that admit sketchy workers and allow business to evade US laws regarding immigration, wages and work conditions. [The Hidden Workforce Expanding Tesla’s Factory, By Louis Hansen, San Jose Mercury News, May 15, 2015] The local company Tesla was the case under scrutiny.

The face of the story is Gregor Lesnik, a Slovenian electrician hired to work at Tesla’s Fremont plant. He worked 10-hour days, six days a week installing pipes in a Tesla paint shop until he fell through the roof. He sustained serious injuries, for which none of the companies which aided his hiring wanted to be financially responsible: being a subcontractor is a common and convenient excuse. Lesnik is currently engaged in a lawsuit that has shined a light on the corrupt cheap labor system.

[Industry Still Imports Cheap Foreign Labor in Violation of US Law, by Brenda Walker, VDare, May 17, 2016]

Attorney General Jeff Sessions has told Americans that those who violate immigration laws will be prosecuted, but the United States Attorney for the Northern District of California, Brian Stretch, a Deep State Obama operative, has not yet announced prosecution of Tesla and Tesla's co-conspirators, Eisenmann USA and ISM Vuzem, Inc.

Give Brian Stretch a call here and ask him why:

Time for President Trump to act against Tesla by ending its tax breaks and shutting off the supply of H-1B and illegal alien labor.