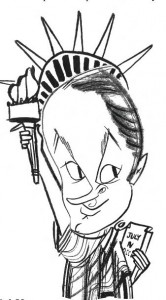 At the request of lawyer and Ellis Island Commissioner Norman Liss, the library in the Great Hall at Ellis Island has been named after Bob Hope, who came to America from England in 1908, at the age of 4. There's a story about it in the New Yorker—Remembering Bob Hope With A Library, October 25, 2010 [Subscriber link] New Yorker staffer Mark Singer writes

"Had Hope been less beloved, it would be easier to understand the difficulties that Representative Eliot Engel (D-Bronx, Westchester, Rockland) encountered when, in response to a request in 2005 from Norman Liss, a constituent and the chairman of the Ellis Island Restoration Commission,  he sponsored legislation to have the research library named for Hope. 'It took us five years and stretched across two Congresses to get it done, and the National Park Service fought us every step of the way, Engel said. 'Who knows why, God bless ”em.' (Why, according to 2007 Senate testimony by the deputy director of the Park Service: 'Bob Hope did enter the United States through Ellis Island… however there is no compelling connection between his life and the Ellis Island Immigration Museum.')"

It's obvious what the problem is. Hope was an Englishman from Eltham, near London. Ellis Island immigration is credited with, (or blamed for) "transforming" America.

How much transformation could White Anglo-Saxon Protestant immigrants like Hope cause?

Update: Reader Roger Chaillet points out that at the time of his death, Hope was a White Anglo-Saxon Catholic:

Seven years ago, after nearly six decades of marriage to an active Roman Catholic, Bob Hope was received into the Catholic Church, and became a frequent communicant. His funeral Mass was celebrated on July 30 at St. Charles Borromeo Catholic Church in North Hollywood, and on Sunday, August 3, he was remembered at a memorial Mass celebrated by Cardinal Theodore McCarrick of Washington, D.C. at the National Shrine of the Immaculate Conception.

Of course that was after 93 years as a Protestant. However, what I meant by WASP was more of a national characteristic than a religious one—Hope was a WASP Catholic after his conversion, the same as Alan Watts and Christmas Humphreys were WASP Buddhists. The immigration point remains the same.