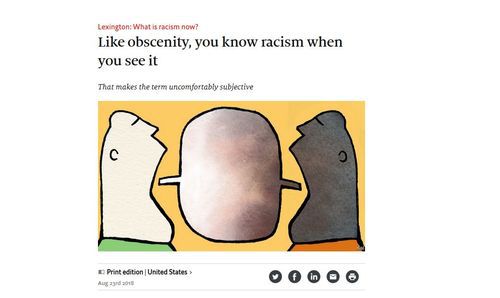 Economist: "What Is Racism Now?"

Lexington: What is racism now? Like obscenity, you know racism when you see it

The Economist has long found it helps buff up its institutional credibility to cloak its writers in anonymity or pseudonymity, such as calling a writer “Lexington” to lend the dignity of Revolutionary War battles and aircraft carriers to pixel-stained wretches.

That makes the term uncomfortably subjective

SINCE the publication of Omarosa Manigault Newman’s book about her time in the Trump administration, the president’s political opponents have been indulging in a charmingly old-fashioned debate.

Okay … I’m going to trim the Deep Think part about Omarosa. Has anybody noticed how much Omarosa resembles in real life the stereotypical mid-level manager Litigious Black Lady that she plays so convincingly on TV?

… This does not get the president off the hook, though, for the meaning of racism has shifted during his lifetime. It is no longer enough just to express admiration for civil-rights leaders, support for racially mixed education or a past opposition to the Ku Klux Klan for a politician to prove that he is on the right side of the line. Some proper sense of the violence perpetrated against African- and Native Americans for much of the past three centuries is required.

On the other hand, any memory of the last 50+ years is condemned. For you to remember The Sixties, for example, is racist. Ta-Nehisi Coates knows practically nothing of The Sixties, so you shouldn’t either.

In particular, for you to regret all the incremental violence perpetrated against blacks by other blacks since Black Lives Matter in 8/2014, the thousands of unexpected extra homicides in since then, is just evidence of your white racism.

An understanding of how that history still reverberates through American society, showing up in disparities in income, education, incarceration and welfare receipts is also necessary. Some familiarity with the copious literature on unconscious racial bias is a plus.

Any knowledge of genetics, evolutionary history, or what you can learn about Africa from perusing The Economist, is a minus.

… then what defines racism now?

… Later on in her book, Ms Manigault Newman describes an exchange with Stephen Bannon, then the chief strategist to the president, which helps to refine it. “I had an interesting conversation with Bannon and asked him if the rumours of him being a racist were true,” she writes. “He said no. He explained, ‘The same way you are a proud African-American woman, I am a proud white man. What’s the difference between my pride and your pride?’”

White pride is taboo in American politics: the smells of burning crosses and Zyklon B cling to it still.

Who doesn’t associate white Americans with Zyklon B?

You don’t? You had, say, a white American uncle who died fighting Nazis? But you are white, aren’t you? The hereditary taint of evil is in your white blood, you evil subhuman.

White pride is troubling because of its association with a violent fringe movement that the FBI tracks assiduously. But it is also troubling because demands made by political majorities on the basis of race are more threatening than those made by minorities. White pride is scary; Irish pride is celebrated with marching bands and by dyeing the Chicago River iridescent green. It is only when Irish-Americans join with other whites to make political demands that this way of doing politics becomes alarming, because this larger group might have the power to impose its will on everyone else.

As we all know, the essence of democracy is larger groups being imposed upon by smaller groups. For the majority to form a majority is just wrong. It would be like a wrestler disobeying his script.

As America becomes a more racially mixed society and the pre-eminence of whites fades, a point which is still decades away, that objection to white pride could one day fall away.

Yeah, sure, that will happen, real soon now. Any day.

That does not mean that white Americans cannot be proud of their country or its history in the meantime. It means that organising politically around the idea of whiteness is, well, racist.

On the other hand, the Democratic Party organizing it’s Coalition of the Margins politically around the idea of anti-whiteness is, well, anti-racist. It’s simple logic: both “anti-whiteness” and “anti-racist” have the term “anti” in them, so they are the same things, you hateful hater.