On Thursday, Teamsters and other friends of safety on America's roads rallied against the NAFTA scheme to allow Mexican trucks access to all of the United States. Not only will uninspected Mexican trucks make it enormously more difficult to keep out drugs, terrorists and illegal aliens, but clunkers driven by foreigners are absolutely accidents waiting to happen. 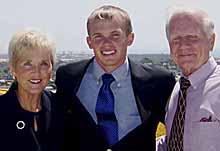 Globalization continues to shred hard-won improvements in highway safety, as shown by one American family that has already paid the ultimate price:

In Washington, foes held a morning news conference on Capitol Hill to make their case. Sheryl McGurk, who lost three family members in a collision with a Mexican truck in San Diego two years ago, was one of the speakers.

”To lose your mom, your dad and your nephew all at once is indescribable,” she said.

McGurk's parents, Robert and Marie Jennings of Carlsbad, and her nephew, David Jennings II of Beaver Creek, Ohio, were killed when their van hit a Mexican truck that was stalled on Interstate 5 near Carmel Valley Road. [Teamsters continue battle against truck initiative, San Diego Union-Tribune 9/06/07]

The terrible crash that killed the family was characterized at the time as an unfortunate accident, where the Mexican truck had stalled and the Jennings' car plowed into it in the early morning darkness.

The truck lost its drive train and stalled in the No. 4 lane about 10 minutes before the 5:15 a.m. accident south of Carmel Valley Road, Officer Mark Gregg, Highway Patrol spokesman, said Wednesday. [Truck in fatal crash appears to have had no violations North County Times 2/16/05].

However, more facts have come to light and the case appears far more troubling than initially described.

Investigators had determined that the truck had actually been rolling down the incline toward oncoming highway traffic that predawn morning. Its driveshaft had fallen out and was found 30 feet in front of the crash site. Its lights were not operating and it was not equipped with the reflectors or reflective tape required on all U.S. trucks.

The driver was apparently on his way to Los Angeles, illegally breaking the ban on Mexican trucks beyond the 25-mile border commercial zone. He apparently realized his truck wouldn't make it to L.A. because witnesses said he turned around and got back on the highway heading south. [Mexican Truck Killed Family, DailyKos.com 9/6/07]

Sheryl McGurk, daughter of Robert and Marie Jennings, no longer accepts the official story, as she stated at the press conference held by several members of Congress on Thursday.

And because Mexico does not have a comprehensive data base of commerical drivers license holders or traffic violations, there is no way of knowing if that driver is still operating on American roads today.

McGurk hired a wrongful death attorney, who in turn hired a private investigator to reconstruct the accident. They were able to inspect the truck, but it had been tampered with since the accident. The driver couldn't be located.

The facts of this case foretell far more dangerous highways and a deadly future for many other families if this escalation of open borders is allowed to be fully enacted.