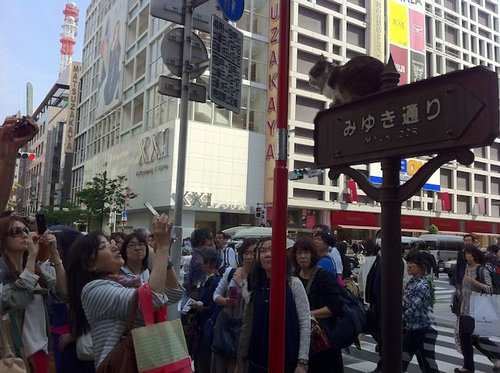 Due to a Lack of Mass Immigration, Japan Is Plagued by a Rising Standard of Living

When reading articles in the American press about problems in America, such as high prices for homes, inequality, low wages, low test scores, and so forth, it’s always fun to hit CTRL-F (or Command-F on a Mac) to see if the text string “migra” is included anywhere in the article. Normally, in articles about troubles in America, there’s no mention of the role of “immigration,” “immigrants,” “migration,” or whatever.

When reading American articles about conditions in Japan, such as increasing housing space per Japanese person, it’s interesting to try the same thing. You’ll often see that “immigration” is mentioned in the article, although not as a problem, of course. Instead, it is always The Solution for whatever is said to ail Japan.

For example, here’s a new New York Times article about how the Japanese aren’t quite as squeezed into tiny living spaces as they used to be. Of course, the cure for whatever ails Japan is immigration, even when, at the very end of the article, the reporter reveals that it isn’t actually a problem.

A Sprawl of Ghost Homes in Aging Tokyo Suburbs By JONATHAN SOBLE AUG. 23, 2015

YOKOSUKA, Japan — Ever since her elderly neighbor moved a decade ago, Yoriko Haneda has done what she can to keep the empty house she left behind from becoming an eyesore. Ms. Haneda regularly trims its shrubs and clips its narrow strip of grass, maintaining its perfect view of the sea. …

“There are empty houses everywhere, places where nobody’s lived for 20 years, and more are cropping up all the time,” said Ms. Haneda, 77, complaining that thieves had broken into her neighbor’s house twice and that a typhoon had damaged the roof of the one next to it.

Despite a deeply rooted national aversion to waste, discarded homes are spreading across Japan like a blight in a garden. Long-term vacancy rates have climbed significantly higher than in the United States or Europe, and some eight million dwellings are now unoccupied, according to a government count. Nearly half of them have been forsaken completely — neither for sale nor for rent, they simply sit there, in varying states of disrepair.

These ghost homes are the most visible sign of human retreat in a country where the population peaked a half-decade ago and is forecast to fall by a third over the next 50 years. The demographic pressure has weighed on the Japanese economy, as a smaller work force struggles to support a growing proportion of the old, and has prompted intense debate over long-term proposals to boost immigration or encourage women to have more children. …

“Tokyo could end up being surrounded by Detroits,” said Tomohiko Makino, a real estate expert who has studied the vacant-house phenomenon.

And if you can’t trust real estate experts, such as Angelo Mozilo, who can you trust?

… Land prices in Yokosuka are down by 70 percent since their peak at the end of the 1980s.

… Japan’s population of 127 million is expected to drop by a million a year in the coming decades. Efforts to increase its low birthrate have been only modestly successful, and the public has shown no appetite for mass immigration. …

Eventually, the article reveals that the Japanese having to tear

down tiny, decaying shacks that nobody wants to live in anymore isn’t really a problem.

Houses in Japan, what with all the earthquakes, fires, atom bombs, and prehistoric monster attacks, weren’t built to last. This is how things have always worked in Japan.

Hidetaka Yoneyama, a housing specialist at the Fujitsu Research Institute, a think tank, said that until recently, homes in Japan were built to last only about 30 years, when they were then expected to be torn down and rebuilt. Building quality is improving, but the market for secondhand homes remains tiny. Developers are still building more than 800,000 new homes and condominiums a year, despite the glut of vacancies.

“In the high-growth era, everyone was happy with this arrangement,” Mr. Yoneyama said. But in 20 years, he calculated, more than one-quarter of Japanese houses could be empty. “Now the tables are turned. The population is declining and no one wants to live in these old houses.”

Because they are small, falling-apart dumps, and modern Japanese people would rather live in nice new houses.

But don’t you feel sorry for the poor lonely old shacks who have nobody to live in them anymore? They’re like the sad lamp in this ad made by Spike Jonze:

Whatever the problem is, even if it’s not really a problem, immigration will fix it.