Does Adolf Balbuena, pictured below, look 18 or does he look considerably older? 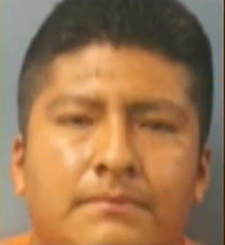 As a result of the young man having been considered a minor until recently, he is being treated differently for running down and killing a child in Porterville, California, with the age mentioned offhandedly in the video report below. But he has no drivers license, so how can authorities know his true age?

TRACE GALLEGER: Balbuena just turned 18 years old, so any criminal record in the past is sealed. But critics note the Obama administration has cut back enforcement of immigration laws against illegal immigrants with DUI convictions or identity theft convictions. A customs and immigration attorney has even filed a discrimination lawsuit against the Department of Homeland Security. In it she alleges that she and her colleagues were told to use prosecutorial discretion when it comes to criminal aliens who had old DUI convictions. She says when she challenged her boss about an alien with a criminal record, she was told to quote, let it go.

It is not unheard of for illegal aliens for pose as minors to get more advantageous treatment, for example as happened with Honduran crack dealers in San Francisco. Middle-aged illegal aliens recently pretended to be teenagers to attend a Massachusetts high school.

Here’s more about the drunk alien hit and run:

An illegal immigrant driving drunk and without a license crashed through a fence Sunday, hitting and killing a 3-year-old girl as she was waiting in line for ice cream in Porterville, California.

Adolf Balbuena, 18, mowed down the toddler, Angeles Moreno, as she and several others, including an 8-year-old boy, were waiting line at an ice cream truck.

After hitting Moreno, Balbuena backed up and drove away. He was arrested at his home around an hour later, the Fresno Bee reported.

Initial reports did not state Balbuena’s immigration status, but KMPH reported on Tuesday that he is an illegal immigrant from Mexico. Though the local district attorney is handling the case, U.S. Citizenship and Immigration Services will ultimately decide whether he will be tried in the U.S. or deported back to Mexico, the TV station reported. [. . .]

Following is a story about the lawsuit mentioned above:

The Obama administration told federal immigration lawyers to release illegal immigrants with “old” drunken-driving convictions and those found guilty of stealing other people’s identities, according to a lawsuit filed by one of the lawyers at the center of the operation.

Patricia M. Vroom, a top attorney for U.S. Immigration and Customs Enforcement in Arizona, filed a 67-page discrimination complaint that details repeated battles with agency higher-ups who told her to close cases and not deport people whom President Obama deemed low-priority.

Federal officials were particularly dismissive of identity theft convictions from Arizona, arguing that the state’s laws were too strict and stealing an ID to get a job wasn’t a serious enough offense to get kicked out of the country.

“This was a very significant development, as generally, criminal aliens, particularly convicted felons, are, under the [prosecutorial discretion] memos, ‘priority’ cases that should be aggressively pursued,” Ms. Vroom said in her complaint.

But she said her superiors deemed the identity theft felons low-level offenders “since the typical alien defendant convicted under these provisions of Arizona criminal law had simply been using a fake I.D. to get and keep employment.”

Homeland Security officials said the department, of which ICE is a part, was looking over the lawsuit filed in U.S. District Court in Arizona.

“We are reviewing the allegations in the complaint, which largely refer to events from 2012 and 2013 concerning workplace environment and various personnel decisions taken by key officials, some of whom have since left the department,” spokeswoman Marsha Catron said.

“The leadership of both [the Department of Homeland Security] and ICE take these allegations seriously and, when founded, will always take the appropriate disciplinary action,” she said.

Ms. Vroom, who filed the complaint Nov. 6, declined to comment through her attorney.

In her complaint, she detailed a September conversation in which top ICE lawyers told staff to ignore “old” DUI convictions if immigrants had enough “equities,” such as ties to the community or family responsibilities in the U.S., that would outweigh their criminal behavior.

ICE officials and Mr. Obama have defended their prosecutorial discretion, saying they have enough resources to deport only about 400,000 immigrants a year, so it makes sense to go after the most serious criminals, recent border crossers and those who have violated immigration laws repeatedly.

“We’re misallocating resources. We’re deporting people that shouldn’t be deported. We’re not deporting folks that are dangerous and need to be deported,” Mr. Obama said Sunday on the CBS program “Face the Nation.”

Mr. Obama has promised to expand his nondeportation policies by the end of the year, potentially granting tentative legal status and work permits to millions of illegal immigrants.

Deportations, though, have dropped by about 20 percent over the past two years, suggesting the administration is having trouble finding enough cases that meet its definition of “high priority.”

Critics say the Obama administration has given up on enforcement in all but the most extreme of cases.

“Criminals got released,” said Jessica Vaughan, director of policy studies at the Center for Immigration Studies, which pushes for a crackdown on immigration.

One major area of contention was Arizona’s tough identity theft law, which makes it a felony to steal an identity for the purpose of getting a job. The law appeared designed to punish illegal immigrants who used bogus Social Security numbers to get jobs.

But ICE put pressure on its attorneys in Arizona to drop deportation cases against illegal immigrants convicted of felonies under that statute.

Ms. Vroom recounts that top Homeland Security attorneys held a conference call on Aug. 16, 2013, to talk about how to handle a “dreamer,” or illegal immigrant brought to the U.S. as a child, who had been convicted of ID theft under Arizona’s law. The local field office was pursuing the deportation case, but the top officials wanted it canceled.

Ms. Vroom said officials in Washington should be the ones to insist that the case be canceled because they had such an interest, but a top ICE official rejected that idea in an email to Ms. Vroom: “No way. Keep it local Pat. Figure it out.”

Arizona’s identity theft laws are being challenged in court.

Annie Lai, an assistant clinical professor of law at the University of California at Irvine, is leading a case arguing that Congress, not Arizona, has the power to regulate identity theft involving immigrants seeking jobs.

“A state can’t create regulations that are going to present an obstacle to accomplishing federal objectives,” she said.

She said one example of a state law’s interference with federal goals is the case of Noemi Romero, a young Arizona woman who would appear to qualify for Mr. Obama’s deferred action policy for dreamers.

Ms. Romero, though, has not been approved for the policy. She told The Arizona Republic that she was convicted of criminal impersonation under Arizona law because she used her mother’s Social Security number to get a job. That felony conviction has prevented her from gaining deferred action, she said.

If she had earned deferred action, she would have tentative legal status, a work permit and the chance in many states to apply for a driver’s license and be eligible for in-state tuition. Instead, she remains in a legal limbo, with her deportation case put on hold, but without legal authorization to work in the U.S.

Ms. Lai said they have already had a court date to argue for a preliminary injunction against Arizona’s identity-theft laws, and they are awaiting a judge’s ruling on that.