In 2011, 23-year-old Matthew Denice was dragged to death by a drunk-driving illegal alien from Ecuador. Nicolas Guaman, with a blood alcohol level at 3x the legal limit, ran a stop sign, crashed into Denice’s motorcycle and dragged the young man for a quarter mile as bystanders banged on Guaman’s truck to make him stop.

Matthew Denice, shown below, had graduated from Fitchburg State University and planned to go to graduate school to study criminal justice.

This crime was easily preventable had authorities used deportation as intended to remove dangerous persons. As noted in a 2011 report:

Milford police arrested Guaman in 2008 on charges of assault and battery on a police officer and at least one public employee and of breaking and entering, according to the police and the Worcester district attorney’s office. The case was continued without a finding for one year. Police said he also faced a few minor traffic charges dating to 2007, but the district attorney’s office could not confirm that information.

Guaman had assaulted a police officer but was not deported. Massachusetts is crazy liberal and likes to pamper dangerous foreigners. Another example: a court-appointed psychologist told the previous judge on the case that Guaman couldn’t be tried because “nearly half of indigenous South Americans from Mongoloid descent are deficient in an enzyme required to break down and metabolize alcohol.”

According to proper liberal-think (plus some odd racial formulations), the killer was actually a victim.

The bench trial took four days, and while the prosecution pursued charges of second-degree murder, Judge David Ricciardone decided that a manslaughter verdict was more appropriate, with a sentence of 12-14 years in prison.

The verdict was a disappointment to many, who thought the killer should get the maximum punishment possible. Local WBZ-TV new analyst Jon Keller wrote in Keller @ Large: Nicolas Guaman Is A Murderer: “The justice system bent over backwards to give Guaman a fair trial, but it didn’t do much for Matthew Denice and his family. It looked the other way while Guaman lived here illegally for nine years.” 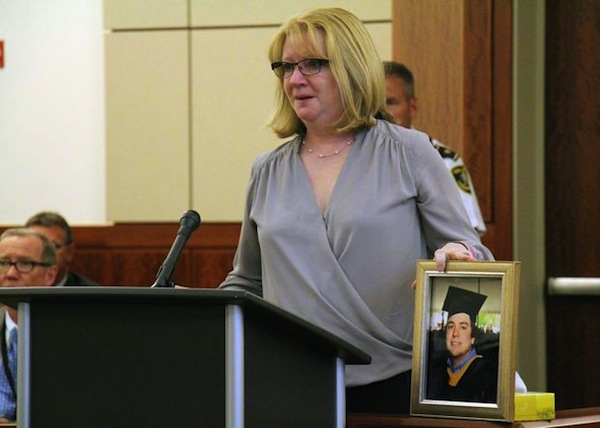 Interestingly, the judge said he gave a less than maximum sentence because of the defendant’s lack of previous criminal behavior. Apparently assaulting a cop is no longer a serious infraction.

An Ecuadorean immigrant was sentenced Monday to 12 to 14 years in prison for dragging a Milford man to his death with his truck.

Prosecutors said that on Aug. 20, 2011, Guaman struck Matthew Denice, 23, who was riding his motorcycle. Denice was caught under the truck and stuck in the wheel well, where he was dragged for about a quarter-mile as panicked onlookers tried frantically to get Guaman to stop.

Guaman was also convicted of reckless endangerment of a child, leaving the scene of an accident which caused personal injury or death, failing to stop for police and driving without a license.

Guaman’s six-year-old son was in the truck at the time of the crash.

Ricciardone also sentenced Guaman to serve 10 years of probation after his sentence is up, during which time he would be forbidden from driving. In all likelihood, Guaman, who came into the country illegally, will be deported before then.

Outside the courtroom, Denice’s family praised the judge’s fairness but said they disagreed with his ruling. They had hoped to see Guaman sentenced to second-degree murder, which carries a life sentence.

Denice’s stepfather, Michael Maloney, said Guaman should be behind bars for the rest of his life.

“I’m biased in this… I see him as doing life,” Maloney said. “He’s a threat to any society he’s in, not just here in America, anywhere. He shows no remorse.”

During more than an hour of gut-wrenching testimony, Denice’s family and friends told the judge how the 23-year-old’s death had devastated those close to him.

Denice’s brother, Michael Denice, said he was dealing with not only the pain of becoming an only child, but with learning the horrific details of his brother’s death.

“The thoughts of the pain, torture and suffering he went through the last 90 seconds of his life are something I am going to have to deal with forever,” Michael Denice said.

Family described Matthew Denice as an outgoing, instantly likable 23-year-old. Just weeks before his death, Denice had graduated from Fitchburg State University and planned to go to graduate school to study criminal justice.

Maloney said the death of her son had irrevocably altered her life, infecting her relationships with family and friends and causing health problems, depression and insomnia. She said her life is now divided into two eras: before Matthew’s death, and after.

“I have lost my faith in humanity,” Maloney said. “I question if there is a god, and if so, where he was as Matthew was dragged to his death.”

Through tears, Maloney narrated a series of family photos, in which Matthew Denice could be seen on a family vacation, golfing and goofing around with a younger relative.

Read the impact statements read by Maureen and Michael Maloney:

Ricciardone said he was moved by the family’s testimony, particularly Maloney’s. But he declined to give Guaman the harshest possible sentence — prosecutors had asked for a minimum of 18 and a half years — because of the defendant’s lack of criminal history.

Guaman’s defense attorney, Peter Ettenberg, had asked the judge for a lenient sentence. He said his client has grown up in absolute poverty, going to work picking potatoes and corn in his native Ecuador when he was 8. Guaman had very limited education, and can not read, write or speak English, he said.

Throughout the trial, Guaman listened with help from a Spanish language interpreter.

Guaman did not show any visible emotion during the proceedings. Ettenberg said during the hearing that his client was “profoundly affected” by Denice’s death.

“He has told us that he is sorry for what happened, he never intended it to happen,” Ettenberg said, “and he himself is a good man.”

The case sparked furious debate over illegal immigration after details were made public. Guaman came to the United States more than a decade ago, walking, hitchhiking and taking jobs on ships during the two-month trek, his attorney said.

Later, he sent home enough money from jobs as a laborer and a roofer to bring his wife and a child to live with him.

Denice’s family weighed in on the immigration angle, telling reporters Massachusetts should not proceed with proposals that would give driver’s licenses to illegal immigrants.

“This is a classic example, somebody from a third world country, limited education, who’d been here nine full years prior to Matthew’s death, and he does not speak a word of English,” Maloney said. “What does that say about somebody’s motivation to assimilate into society?”