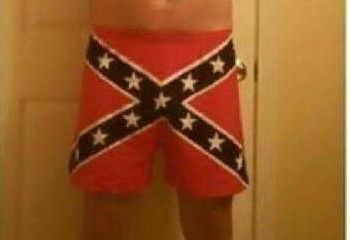 North Charleston South Carolina police officer Shannon Didline posted a picture of himself wearing Confederate Flag boxers on facebook. Within days he was fired from his job. North Charleston Police Chief Eddie Driggers explained why he had to fire Didline

“On Tuesday ... the City learned that you posted on Facebook a photograph in which you were wearing only a pair of boxer shorts emblazoned with the image of the Confederate flag . . . Your posting in this manner led to you being publicly identified as a North Charleston Police officer and associated both you and the Department with an image that symbolizes hate and oppression to a significant portion of the citizens we are sworn to serve. North Charleston officer fired for posing in rebel flag underwear, by Cleve O'Quinn, Post And Courier, June 25 2015

Contrast Didline to black Philadelphia paramedic Marcell Salters. Salters posted an Instagram image of two black pointing a gun at a defenseless white police officer with the caption "Our real enemy" while expressing the "need 2 stop pointing guns at each other & at the ones that's legally killing innocents."’ Unlike Didline, Salters was clearly promoting racially based murder against police. 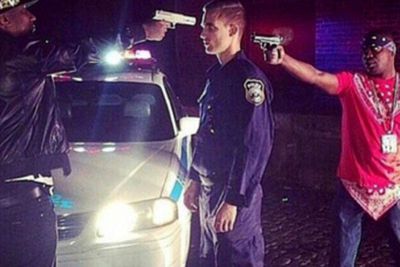 Few defended Salters post, and the black Philadelphia Mayor Michael Nutter strongly condemned him. However, as far as I can tell he still has his job.