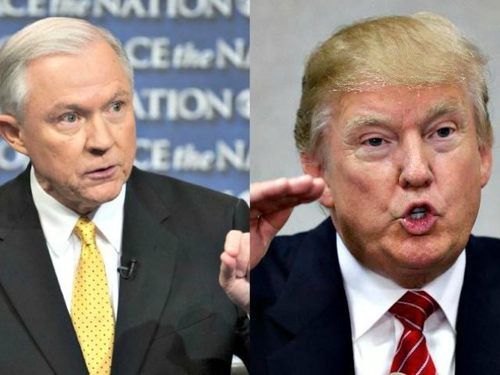 This could potentially be very good news. Donald Trump has done a great job shaking up the establishment and defying the media. But sometimes it seems as though he's winging it, and some of his comments on immigration have been troubling. Trump needs to sit down with somebody like—Senator Jeff Sessions? Could it really be?

Julia Hahn of Breitbart reports that Trump is consulting with America's Senator Jeff Sessions, to help him craft an immigration policy. That could be very good.

The article is entitled Game Change: Trump Consults With Sen Jeff Sessions On Immigration Strategy, August 14, 2015. Here are some excerpts:

In what may be the most important development in the 2016 Presidential race to date, Donald Trump has announced, and Sen. Jeff Sessions (R-AL)’ office has confirmed, that the GOP front-runner is consulting with the Alabama Senator in crafting his immigration plan for the future of America. The real estate mogul’s announcement will send shock waves through Washington D.C. and all across primary states.

I hope it does. What a pair - Trump and Sessions!

Trump, whose campaign has focused primarily on issues of immigration and trade, has seen a meteoric rise since entering the race, with throngs of supporters across the country rocketing him to the top of every single poll, despite an extraordinary effort of establishment Republicans to take him down. Republican pundits have lobbed every imaginable accusation at Trump. Yet these same pundits, while seemingly furious at the man, have demonstrated no similar concern, angst, or passion about the dissolution of our southern border, the rampant exploitation of guest-worker programs, the collapse of middle class wages, and the growing illegal immigrant crime wave.

Sen. Sessions, Chairman of the Senate’s Immigration Subcommittee, is widely regarded as the gold standard on immigration. Sessions has also become the intellectual thought leader in the Republican Party on appealing to the blue collar voters who have been abandoned by their political leaders.

The Breitbart article quotes the Washington Post as saying that

Donald Trump will unveil a series of position papers in early September...beginning with a plan to address immigration policy that was crafted with the counsel of Sen. Jeff Sessions (R-Ala.), a favorite of conservative activists and an outspoken border hawk…

And the Sessions camp confirms it. According to Sessions' spokesman Stephen Miller:

Senator Sessions enjoyed the opportunity to speak with Mr. Trump. The senator believes the defining issues in 2016 will be how to earn the trust of struggling workers, and how to develop trade and immigration policies that serve their interests.

So both camps confirm it, and it's out in the open. Good. I look forward to the policy proposals in September.

Trump told The Post that he holds the Alabama Senator in extremely high regard: “I like him… Tough guy. I like that. We have a similar thought process.”

If Trump outlines immigration policy specifics along the lines of what Sessions has articulated, polling data suggests that it will not only position Trump to perform well in the Republican primary, but also in the general election.

It's a potentially winning strategy, if conducted properly and courageously.

The most important point, underscored by the polling data but often lost in media labels, is that Sessions’ immigration philosophy and strategy is fundamentally grounded in principles that poll well with moderates, liberals, minorities, and the American electorate at large. The consultant class has never understood the immigration issue: for them, immigration messaging is primarily based in vague references to border enforcement in the primary, followed by general election support for large-scale immigration that turns off blue collar voters and women voters the GOP needs to win.

The last paragraph in Julia's article sums it up nicely:

Donald Trump has long been a conservative favorite for his tough stance on immigration and trade and his message that we need to bring jobs back to the United States of America and put the needs of the American people first. A continued emphasis on this message and consultation with Sen. Sessions will send a resounding signal to millions of blue collar American voters across the country that a vote for Trump may be their best chance at regaining control over their collapsing economic futures.

We look forward to seeing how this develops.