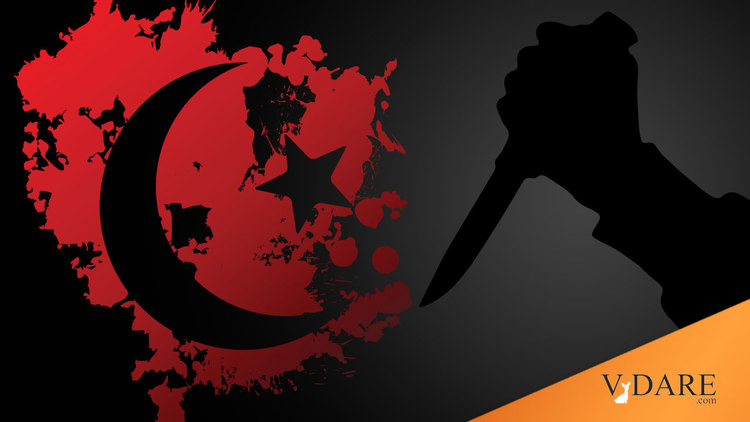 Don’t Make The Muslims Mad. Rejecting A “Migrant’s” Sexual Advance Might End In A Stabbing

From Switzerland, we learn that Sudden Jihad and Sexual Jihad syndromes are often linked to create Sudden Sexual Jihad Syndrome. A “migrant” from Benin, in West Africa, has been convicted of nearly killing a Swiss woman by slashing her to pieces with a broken bottle. The reason: He grabbed her genitals, she rejected him. So, of course, he had to punish her.

On August 4, 2020, “a 26-year-old from Benin who had been sleeping for three days at Romont station near Lausanne saw a woman boarding a train and decided to follow her,” Remix reported:

On board, he cornered her and tried to touch her crotch. The 27-year-old woman managed to push him away while screaming. She then sat further away from him while a young man of 20 approached to assist her. …

The young man called the police, but the Beninese migrant returned, armed with a broken bottle.

[‘I have never seen such violence’ — Beninese migrant convicted for nearly killing Swiss woman with a broken bottle, leaving her with 200 stitches and deep psychological trauma, by John Cody, May 9, 2022].

You know what happened next. The put-upon “migrant” exploded in a frenzied attack and cut them to shreds. The poor young women needed 200 stitches; her younger defender needed “extensive medical treatment,” the website reported:

“I have never seen such violence. I even saw a piece of flesh about seven centimeters in diameter on the ground,” said a witness during the trial.

The woman continues to suffer gravely from the attack.

“I am always anxious and on alert. Every morning when I see my body, I think back to everything. I feel like a monster. I no longer dare to wear skirts, shorts, or T-shirts. There are no words to describe how I feel,” the teary-eyed young woman said during the trial.

No one should be surprised. Muslim immigrants rape and murder with impunity. Recall:

The permanently traumatized woman left with 200 stitches proves what VDARE has explained time and again: Muslim immigration means sudden or sexual jihad—or both. The globalist European Deep State is importing Muslim “migrants” to sacrifice white women on the altar of diversity.

And, it appears, European men will do nothing about it.