Don’t Be Fooled By.... Guys Named Haroon Trying To Tell You How To Be American

One of the more annoying habits of immigrants is their lecturing Americans on how to be good Americans.

A recent example appears at CNN.com, with a fellow named Haroon Moghul (right) telling us that Pamela Geller's Mohammed cartoon event in Texas was un-American.

It’s possible you’d never heard of Pamela Geller before Sunday night’s tragic attack in Garland, Texas. You might think she's taking a brave stand for free speech, for American values, and that by supporting her, you’re supporting America.

I’m here to disabuse you of that notion. While Geller claims to stand for American values, much of what she does undermines our values.[Don't be fooled by Pamela Geller, May 4, 2015]

Robert Spencer tackles this apologist for jihad in detail at Jihad Watch [Don’t be fooled by Haroon Moghul, May 5, 2015] but the point here is to aver that no American should listen to a Muslim foreigner tell him what it means to be an American.

The wisdom of provoking Muslims by blaspheming the prophet is doubtful. That truth doesn’t excuse the insanity that follows such blasphemies, but I sympathize with those who find it distasteful and counterproductive. We needn’t support Geller’s antics—she has her own agenda—for the sake of “free speech.”

But that doesn’t mean we need lectures from foreigners named Haroon Moghul. [Email him]I don’t where he's from, but he’s not an American. Those of us with roots in this country going back 300 years, those of us with ancestors who fought with George Washington and Daniel Morgan, don’t need his condescending remonstration about what it means to be an American. Nor do we need from these annoying immigrants, particularly Muslims, advice on making them them feel more welcome. We don’t want them to feel welcome. We want them to leave. Now. 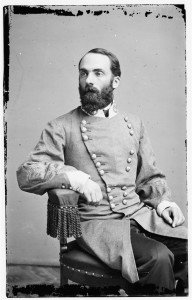 Moghul’s effrontery reminds me of what happened when Confederate Gen. Richard Taylor (right) surrendered in 1865 at Citronelle, Ala. As historian Clyde Wilson notes, Taylor recounted a German immigrant’s arrogance at the surrender in his memoirs:

There was, as ever, a skeleton at the feast, in the person of a general officer who had recently left Germany to become a citizen and soldier of the United States. This person, with the strong accent and idioms of the Fatherland, comforted me by assurances that we of the South would speedily recognize our ignorance and errors […] and rejoice in the results of the war. […] I apologized meekly for my ignorance, on the ground that my ancestors had come from England to Virginia in 1608, and, in the short intervening period of two hundred and fifty-odd years, had found no time to transmit to me correct ideas of the duties of American citizenship. Moreover, my grandfather, commanding the 9th Virginia regiment in our Revolutionary army, had assisted in the defeat and capture of the Hessian mercenaries at Trenton, and I lamented that he had not, by association with these worthies, enlightened his understanding. My friend smiled blandly, and assured me of his willingness to instruct me.

“Modestly,” Wilson observed, “Taylor did not mention that his father had been President of the United States.”