An Onomastic Favorite—Shitavious Cook Gets 22 Years

Via the Countenance blog, we now have a picture of every race cynic’s onomastic favorite. 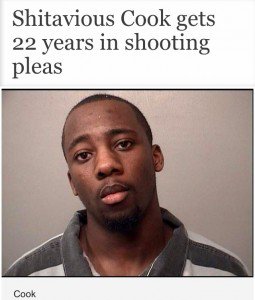 The four-letter first syllable of Mr. Cook’s baptismal name used to show up occasionally as a variant transcription of the Chinese surname 薛 (Mandarin Xuē or Hsüeh), because 薛 is pronounced that way in some Southern dialects.  The English-language version of the early-1970s Hong Kong telephone book had several subscribers thus listed.

When I pointed this out once to an expat colleague, he murmured: “Yes, well, there are plenty of those in the London phone book too … but all under pseudonyms.”