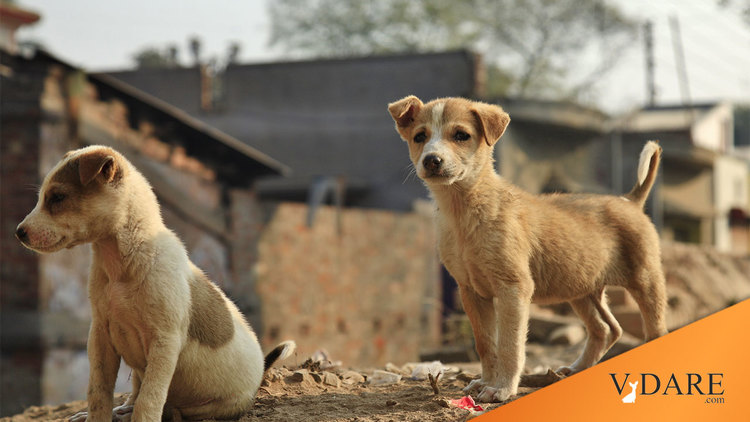 From the New York Times, an amusing quasi-self parodistic article about people who have more parenting drive than actual children to expend them upon.

Not to brag, but we may have a little genius on our hands. Our 6-month-old is up before dawn playing brain games. She knows her way around an iPad and practically devours puzzles, and I’m teaching her to read. Just recently, she mastered an advanced chess toy.

I am talking, of course, about our dog.

Let me rewind a moment. The last time I had a puppy, I was 9 years old. This might as well have been in the Mesozoic era, since life with a dog was so primitive then. If Buck was good, he got Gaines-Burgers and maybe a Milk-Bone. Bad, we’d deliver stern admonitions over the half-eaten sneaker. But within hours of adopting our fuzzy, adorable Pi, I sensed that being a pet parent today — nobody uses the word “owner” anymore, apparently — means cultivating intelligence, manners and communication skills the way the parent of, say, a small human might.

Kant argued for treating other persons as ends and not merely as the means to our own selfish ends. It's fascinating how so many people have internalized that when it comes to their pets.

Our canine compadres no longer eat from mere bowls. Now there are interactive feeding products like Dog Twister (imported from Sweden, no less, for around $50), with rotating hidden compartments that make dogs reason their way to kibble. Another, called Slo-Bowl, pays homage to the artisanal food movement, with “nature-inspired” rubber curves and ridges that keep dogs “foraging for every bite,” the company’s website says ($20). A doggy tick-tack-toe puzzle from Petco encourages “problem solving” and increases “eye-paw-mouth coordination,” for $17. Smartphone apps like App for Dog, iSqueek and Answers: YesNo let puppies doodle, nuzzle virtual chewies and even recognize a few simple words. Others help them take selfies. Then there is the spreading quantified dog movement: A San Francisco company called Whistle Labs makes a wearable activity monitor — a Fido Fitbit, basically, for $129 — that tracks a dog’s every sit, stay and roll over.

Needless to say, I bought it all. My wife and I were already micromanaging our son’s schoolwork, food intake, extracurricular activities and playdates; why not helicopter Pi to the far limits of her breed? Which, come to think of it, meant figuring out what breed she was in the first place: Mutt doesn’t quite cut it these days. For $70, the scientists behind Wisdom Panel 2.0 will “uncover DNA-based insights that may help you understand your dog’s unique appearance, behaviors and wellness needs,” according to the package. Two awkward cheek swabs later (“I’ll hold her head, you twirl the Q-tip thingee,” my wife said), we were a lab test away from knowing Pi’s pedigree down to eight great-grandparents.

I'm struck by how there is absolutely no mention in this article about the possibility of using all this data now available to improve dog breeds. It just doesn't come up. After all, that's part of "the pseudoscience of eugenics," so scientific breeding is, by definition, unscientific. So, nobody at the NYT level of society thinks about breeding dogs for better functionality. How about an Apartment Dog with a big bladder who only needs to be walked once a day?

A lot of 95 IQ people today think hard about breeding dogs to make them conform even more to the American Kennel Club standards, but at the better educated levels, an interest in animal breeding today is just an idiosyncrasy. (It's tolerated in high-functioning autistic professorTemple Grandin because she's an oddity.) It's not like the days of Darwin and Galton when breeding was a central obsession of the best minds of the age.

A new dog is nothing if not a mystery shrouded in fur. What exactly was lurking behind Pi’s smoky eyes? Would she be a charmer, a rocket scientist or a bumbling, tail-chasing dolt? For answers, I turned to Brian Hare, an evolutionary anthropologist who studies behavior at the Canine Cognition Center at Duke. Last year, he started Dognition, a web-based testing service that charges $29 and up for a series of rigorous at-home video experiments to evaluate your dog’s cognitive skills. The results are fed into a database with tens of thousands of dogs to determine one of nine personality types: “socialite,” “maverick,” “renaissance dog” and so on. ...

We spent weeks looking for such evidence in Pi. Night after night, my 10-year-old son, Sebastian, and I turned our living room into a makeshift doggy science lab as we took Pi through dozens of assessment drills on Dognition’s website that measured empathy, communication, cunning, memory and reason. I would cue up the video instructions as Sebastian readied the treats. The yawn game gauged whether a human yawn elicits one from the dog, a sign of interspecies empathy only certain canines are known to display. Pi wasn’t among them. She just tried to eat the sticky note that was her placekeeper. She fared better at the memory game that asked her to find a treat hidden under a cup after a minute looking away. But then she wouldn’t stop gnawing on the cup. Her Mensa move came in a physical reasoning game in which she inferred time and again that a piece of paper on an angle meant a treat was hidden behind it. Pi grabbed the square of organic white Cheddar and left the paper.

... Mr. Pilley told me, “The big lesson is to recognize that dogs are smarter than we think, and given time, patience and enough enjoyable reinforcement, we can teach them just about anything.”

It’s true that dogs everywhere are doing things that would have been unimaginable in the Alpo era. Last year, researchers at the University of Pennsylvania’s Working Dog Center trained a team of shepherds and retrievers to sniff out lab samples containing ovarian cancer. Scent hounds are also being used to forecast epileptic seizures and potentially life-threatening infections. A black Labrador from the St. Sugar Cancer-Sniffing Dog Training Center in Chiba, Japan, was accurate 98 percent of the time in picking up early-stage signs of colon cancer. As Mr. Hare, from Duke, said, “I will take a dog smelling my breath over a colonoscopy any day of the week, even if it’s just an experiment.”

This is the umpty-umpth article I've read about purported cancer-sniffing dogs. Is this for real? Would it be useful in poor countries that can't afford expensive mass cancer screening programs like a colonoscopy every decade? I don't know the answers to those questions, but what I'm struck by is how none of the articles I've read about cancer-sniffing dogs have ever mentioned the idea of breeding the best ones together to develop a new breed specializing in that seemingly valuable task.

Can you imagine if Francis Galton had accumulated a folder of clippings about cancer-sniffing dogs?