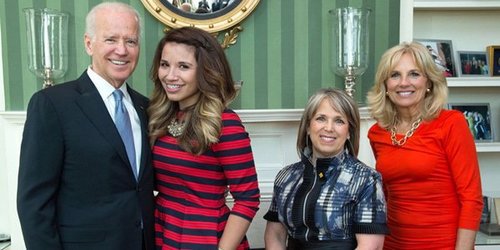 DNC Hires Illegal And Brags About It; What Will GOP Do?

A few months ago, the Washington Post's Arelis Hernandez [email her], self described as a "DC Latina" on Twitter, wrote a puff piece about the Democratic National Committee hiring an "undocumented immigrant" (read "criminal invader") to help craft their 2016 election message.

To the 26-year-old New Mexican, it felt as though he were speaking directly to her. Nava was brought to the United States as a child without documents and knew her immigration status could not only hinder her college and career goals but could also send her packing back to Chihuahua, Mexico at any moment.

Well, not bloody likely. Jose Antonio Vargas has made a career out of being an illegal and lecturing Americans about what racist trash they are for being born. He doesn't seem to have much fear of deportation even as he testifies before Congress.

And minor problems like the law aren't stopping Nava either.

Despite not yet attaining legal status, Nava is working for the Democratic National Committee as one of a crop of fellows from around the country helping the party organize ahead of a presidential election that President Obama predicted would feature immigration as a major issue.

Just remember though, you have to obey the law, and God help you if you fill out one of your tax return forms wrong, you privileged scum.

Still, there are some awkward laws on the books that pretty explicitly prohibit what the Democrats are doing.

The Judicial Watch FEC complaint charges: The United States has prohibited non-citizen participation in election related activities for over fifty years. The United States Supreme Court has held that such prohibitions are legally permissible under the U.S. Constitution… In 2002, Congress expanded the prohibitions on foreign nationals… to include “anything of value” that “directly or indirectly” contributes to a political campaign… The Commission has stated “foreign nationals [cannot] direct, control, or otherwise participate directly or indirectly in the decision-making process of [a] PAC.

On its face, the DNC’s decision to hire Ms. Nava is in direct violation of this provision. The FEC should investigate this matter further to determine the full extent of Ms. Nava’s responsibilities, her relationship to the policy making team, and her effect on the 2016 DNC election strategy.

The United States Congress created a federal offense to knowingly hire an illegal alien. It is against Federal law “to hire, or to recruit…, for employment in the United States an alien knowing the alien is an unauthorized alien… There are two elements to this crime: (1) knowledge of the alien’s status, and (2) an employment offer…

Thus, the DNC is violating federal law by hiring Cindy Nava. Her fellowship constitutes expenditures under the FEC regulation, and therefore these illegal expenditures are within the scope of FEC regulations… They have actively employed Ms. Nava knowing that she lacked proper authorization to work in the United States.

Judicial Watch’s request for a “full, formal investigation” concludes, “These actions are particularly egregious because the DNC flagrantly promotes their illegal activities, lawlessness, and disrespect for the rule of law.”

The real question is what will the GOP do? Here you have flagrant criminality, brazenly displayed before the public. Will we have a word of condemnation from the RNC? Or will Jeb! respond by parading his own illegal hires before the public?