At some point, you take stock of your life and find out exactly where you as an individual, and also where your country, stands.

And at this point, it should be obvious our ruling elite, corporate America, academia, the corporate media, and the Democrat Party believe anyone who dares celebrate the legacy of Washington, Jefferson, Lincoln, and Teddy Roosevelt is a ‘white supremacist.’ Anyone who fails to show sufficient featly to our new overlords, who constantly mandate kneeling before those shouting “Black Lives Matter,” is guilty of lèse-majesté.

In a since-deleted tweet, the Democratic National Committee accused President Trump of “holding a rally glorifying white supremacy” by attending the fireworks display at Mount Rushmore on Independence Day.

“Trump has disrespected Native communities time and again. He’s attempted to limit their voting rights and blocked critical pandemic relief. Now he’s holding a rally glorifying white supremacy at Mount Rushmore — a region once sacred to tribal communities,” the DNC tweeted early Tuesday morning. The tweet linked to a story by The Guardian, which reported that some Native American groups are planning protests at Mount Rushmore in response to Trump’s expected attendance on July 3. 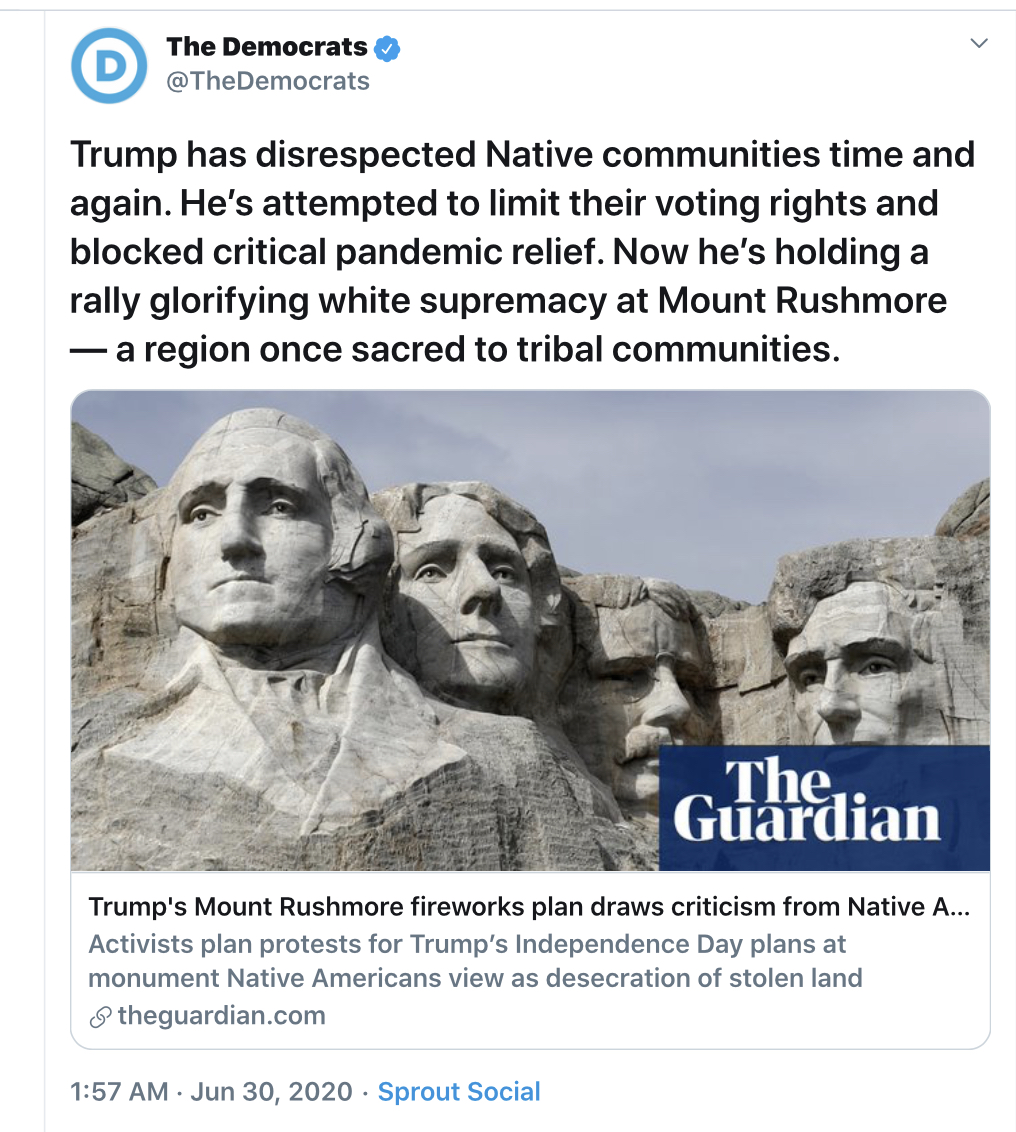 DNC press secretary Brandon Gassaway did not return a request for comment on why the tweet was deleted. The Trump campaign immediately seized on the incident, tweeting that “Joe Biden’s Democrat Party says Mount Rushmore and 4th of July celebrations ‘glorify white supremacy.’”

“To stop this insanity, you have to vote on November 3rd,” the campaign stated.

Any American who dares celebrate Mt. Rushmore and the legacy of Washington, Jefferson, Lincoln, and Teddy Roosevelt is a ‘white supremacist.’

Those in complete control of the megaphone and calling for a dialogue on race (which is really a monologue where white America is told how irredeemable their history is and how insidious they are in the present) have basically signaled anyone who dares celebrate the history of Washington, Jefferson, Lincoln, and Teddy Roosevelt is a ‘white supremacist’.

As monuments come down across America, is becomes obvious the end-goal is the demolishing of Mt. Rushmore.