After Robert The Bruce's Statue Was Vandalized By BLM, The National Trust For Scotland Apologized To Blacks For The Medieval King's Racism

Earlier: A Scottish-American Reader Says OF COURSE Robert The Bruce Wasn't "Racist"—NO BLACKS IN SCOTLAND IN 1274! 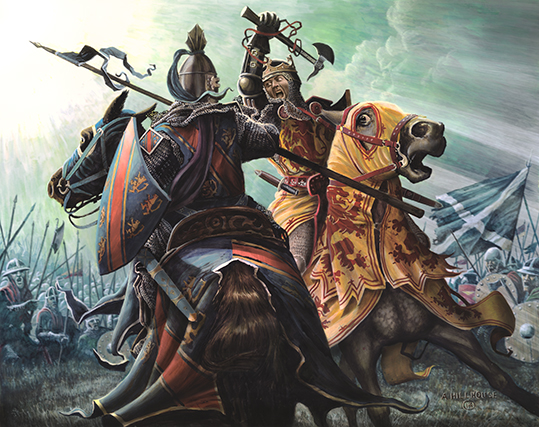 Robert the Bruce, King of the Scots, is Scotland’s national hero for winning the First War of Independence against England.

Robert, 1274-1329, defeated the invading English army at Bannockburn in 1314, personally slaying a charging English knight with his battle-axe.

In June, his statue at Bannockburn was defaced with Black Lives Matter graffiti accusing him of being a racist:

Almost immediately, the Battle of Bannockburn Experience visitor center, under the National Trust for Scotland, issued an apology to blacks for Robert the Bruce’s racism.

Why has Robert the Bruce been branded a racist?

The shock was widespread when the statue of Robert the Bruce close to the Battle of Bannockburn site was vandalised with graffiti calling one of Scotland’s national heroes a racist.
By Alison Campsie
Monday, 15th June 2020, 5:14 pm

… But why did the First King of Scots and leader of Scotland’s forces during much of the first Wars of Independence come under such an attack?

A statement from the Battle of Bannockburn Experience visitor centre has attempted to illuminate the issues surrounding the vandalism, the racism claims and why Bruce has been portrayed in this way.

While it is was not immediately apparent what the graffiti was referencing, it may relate to the fact that Bruce had his heart taken on a crusade following his death in 1329, the centre said.

So, to be precise, Robert the Bruce was guilty of Posthumous Racism because his embalmed heart was taken crusading against the Muslim invaders.

The statement added: “Sir James Douglas, who was an experience [sic] Scottish war leader and had been personally knighted by the king at the Battle of Bannockburn in 1314, led a company of seven other knights and 20 squires to southern Spain, where they joined the army of King Alfonso XI of Castile on campaign against the Muslim emirate of Granada.

“Douglas and his companions were killed at the Battle of Teba in 1330, fighting troops that would have been predominantly (perhaps exclusively) black.

Uh … I can’t find any evidence that the Muslim troops at the Battle of Teba in Spain were exclusively or even predominantly what most American-influenced people would think of as “black” today. The Saracens were led by the Berber prince Uthman ibn Abi al-Ula.

Maybe this is one of those old “The wogs begin at Calais” things where old time Scots saw the French as “black” and they weren’t too sure about the English for that matter.

Heck, Robert the Bruce’s right-hand man Sir James Douglas was known as Black Douglas for the color of his hair.

Perhaps the National Trust for Scotland has been taking its historical guidance from that peerless source of trustworthy facts: Black Twitter.

Maybe some of the Muslims in Spain looked like the above, but others likely looked liked Berber-French soccer all-time great Zinedine Zidane, who looks like Yul Brynner’s 100% Teutonic cousin.

“Some modern histories have sought to present the Scots’ intention as being a peaceful pilgrimage to the Holy Sepulchre in Jerusalem that was merely diverted to warfare in Spain when passage to the Holy Land proved too difficult to manage.

“However, it is clear from contemporary sources, such as the safe conduct Edward III had produced so that Douglas’s party could pass through England on their way to the Continent in 1329, or the absolution given by the pope for the removal of the king’s heart, that the Scots intention had been to do battle ‘against Saracens’.”

‘Saracens’ was a word used in medieval Christendom as a ‘catch-all term for Muslims’ and was certainly not a term that anyone ever applied to themselves, the centre said.

While the religious motivations behind the actions of the Douglas party were obvious, they should not be used to obscure the racial element of the conflict that Scots were involving themselves with, the statement added.

It said: “Medieval discussions of ‘race’ were not as systemised or rigidly structured as they would become in later centuries. But recent scholarship has shown that colour prejudice existed in the medieval period and that the development of the deeply flawed racial discourse that would emerge in the early modern period had already begun.

“The extent to which these broad European trends directly impacted the Scottish political community in general, and King Robert in particular, is limited somewhat by a lack of Scottish sources that discuss the issue.

“However, the Scots were certainly well aware of an engaged [sic] with ideas from outwith [sic] the kingdom and were thus susceptible to this kind of thinking.”

The point is that Robert the Bruce was extremely white, so therefore in all these complicated medieval squabbles he was in the wrong. I mean, do you know who else is Scottish? Yeah, Donald Trump.

It was important that black visitors to the Battle of Bannockburn Visitor Centre felt ‘safe and welcome,' the statement continued.

“The Battle of Bannockburn was a hugely significant moment in Scottish history and is part of a heritage that black Scots have as much right to share in as anyone else.” …

Judging from this statement, I’m sure Robert the Bruce would be proud to see how his spirit lives on today’s Scots, whose first impulse upon having their national hero insulted is to apologize to the vandals.