A series of brutal horse killings in south Florida has owners upset, angry and fearful for the safety of their animals. No arrests have been made, but the way the horses were butchered leads many to believe they were killed to be used as food.

Since January, police say at least 17 horses have been butchered, their carcasses left on roadsides or in stalls or rural pastures.

Police tiptoe around questions about who is doing the killing and why, but animal rights advocates believe the meat is being sold on the black market to people from other countries where horse is a delicacy.
[Horse slaughters have Miami-area owners on edge, Google AP, July 31, 2009]

Are the words "immigrant" or "foreigner" now too un-PC to be used in a news story?

Here's more of the evidence pointing to non-Americans...

"Miami-Dade and South Florida is a melting pot," Couto said. "We have a lot of people, we have a lot of international people, from Asia, Europe, South, Central America and the islands. A lot of these countries, horse meat for human consumption is legal. These people grow up eating this meat."

Investigators have discovered animals with slit throats and slashed tendons. Some have been stabbed to the heart, and some might have been butchered alive. The meat is often harvested in unsanitary conditions — on the sides of roads, in dirty barns, with tools that might not be clean — but Couto says some people are still willing to pay $7 to $20 a pound.

A website called HorseTalk focused on the anguish of owners at seeing a beloved family pet cut up for meat: Horse butchery continues in Florida. One man described the sadness of losing his pinto, Geronimo:

"This is something that needs to be stopped. My horse was very well taken care of and I loved him dearly. He was a member of the family."

"Horse killings horrify Miami-Dade: Richard Couto cuddles a foal whose mother was slaughtered at a Miami stable. Since January, at least 17 horses have been butchered on roadsides or in stalls or rural pastures. While police will not share their theories on who is doing the killing and why, animal advocates believe the meat is being sold on the black market to people from other countries." 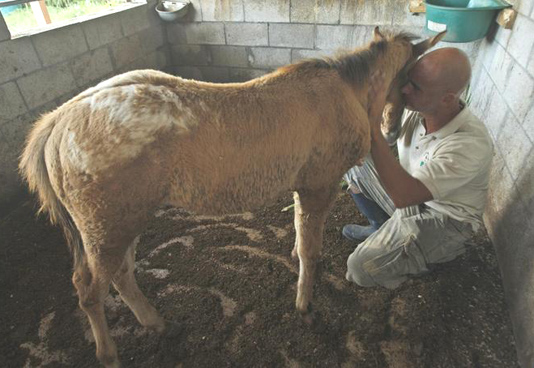 For more on horse killing among the diverse, see my 2007 blog item, Mexicans Are Eating American Horses (after Cruelly Slaughtering Them) and 2004 article, They Kill Horses, Don't They? (Mexicans, That Is).