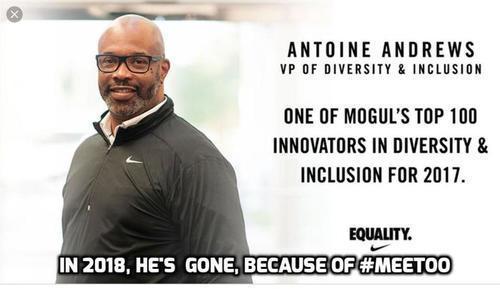 More details are emerging about the internal issues that led to Nike’s executive shake-up last month. 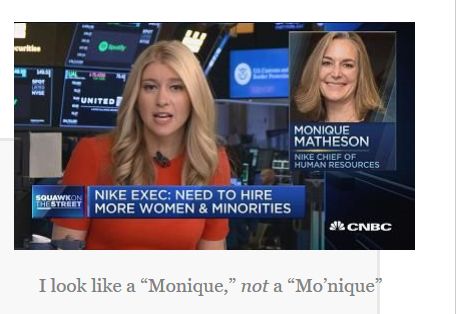 In a company memo obtained by The Wall Street Journal Wednesday, Nike’s chief human resources officer, Monique Matheson, reportedly told staffers that The Swoosh “has failed to gain traction” in hiring and promoting women and minorities.

To that end, Matheson added that the company wants “to create a culture of true inclusion. As part of our plan, we need to improve representation of women and people of color,” WSJ reported.

As everyone knows, People of Color never get handsy around women. Especially black men who love basketball. They are just morally superior, that’s all.

“While we’ve spoken about this many times and tried different ways to achieve change, we have failed to gain traction — and our hiring and promotion decisions are not changing senior-level representation as quickly as we have wanted,” the memo reportedly stated.

In the U.S., 16 percent of vice presidents are nonwhite, she reportedly wrote. …

At the same time, many experts have suggested that an effective remedy for corporate reform — which sees women and other minorities treated more fairly at work — is creating more diversity in the upper ranks of companies.

So, because all six execs who got caught were white, right?

The New York Times, interestingly, while playing it a little indirect and coy about the Fired Six does not, for once, play the You Must Hire More Women and Minorities card:

At Nike, Revolt Led by Women Leads to Exodus of Male Executives

… Finally, fed up, a group of women inside Nike’s Beaverton, Ore., headquarters started a small revolt.

… Over the next several weeks, at least six top male executives left or said they were planning to leave the company, including Trevor Edwards, president of the Nike brand, who was widely viewed as a leading candidate to succeed Mr. Parker, and Jayme Martin, Mr. Edwards’s lieutenant, who oversaw much of Nike’s global business.

Others who have departed include the head of diversity and inclusion

, a vice president in footwear and a senior director for Nike’s basketball division. …

While women struggled to attain top positions at Nike, an inner circle of mostly male leaders emerged who had a direct line to Mr. Edwards. Within the company, as reported earlier in The Wall Street Journal, this group was known as F.O.T., or Friends of Trevor.

The NYT is being coy, but judging from the names in an article in the Portland Business Journal, it looks like two of the six were white (including second ranked Jayme Martin), one South Asian, and three black (including top dog Trevor Edwards).

So, nonwhites make up 1/6th of the Nike executive ranks but 4/6th of the fired executives.