For those of us who love California’s beautiful parks, the state’s abandonment of the system was a tragic portent of destruction to come. With no rangers nearby to keep an eye on the premises, theft and vandalism were sure to follow. 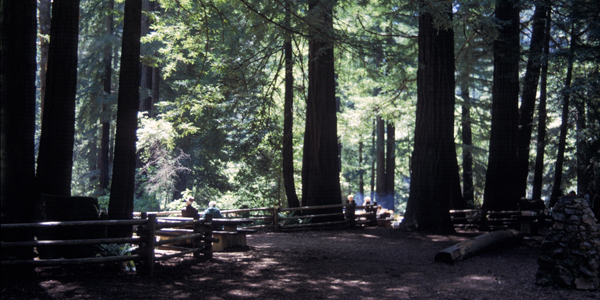 But California closed 70 parks to save $11 million per year. Such are the values of today’s Democrat-run California, even though the Dems claim to be the protectors of the environment.

Victor Davis Hanson (a chronicler of California decline) noticed a local news report about vandalism in a Fresno County park and used the incident to reflect further upon the state’s rapid unravelling.

Last week, while reading about an insolvent California’s insistence on going ahead with the first leg of a proposed high-speed rail line (total cost of the system: an estimated $100-$300 billion), I heard the following story on a local ABC news affiliate about a nearby low-Sierra lake:

FRESNO, Calif. (KFSN) — Acts of vandalism have forced officials to shut down a popular campsite in Fresno County. The Pine Flat Campground located below the Pine Flat Dam on Trimmer Springs Road is closed indefinitely. Nearby Winton Park remains open but things aren’t looking much better there. Vandals tagged rocks, barbeques, and even trees with graffiti. “It was horrible. It didn’t look like nature. It looked like a nightmare,” said visitor Jose Zarate of Fresno.

Unfair to the Vandals You can read the rest of story at KFSN’s Website; additional news items detailed similar stories at other local lakes — a veritable Vandal assault on the vestiges of civilization (actually, that allusion is unfair to the Vandals): copper wire stripped out of power conduits, toilets and sinks ripped out of bathrooms, and, yes, more gang graffiti painted on trees.

I think the latter horror is what earned the local media attention. Destroying public property, assaulting other campers, closing down recreation sites are one thing — but graffiti on trees? That’s an insult that no liberal can stomach. In the grand struggle of environmental correctness versus multiculturalism, green wins every time. (Why do a few liberals oppose illegal immigration? Because of worries about environmental damage along the border.

The Tipping Point I have a hard time timing car trips to Los Angeles because a large section of the 99 state “freeway,” north of Kingsburg, is still (after a half-century) two lanes, potholed, and crammed with traffic. But the rub is that the traffic is of a strange sort, one characterized by an inordinate number of drivers with loose brush, tools, appliances — almost anything — not secured in flat-bed pickups or piled too high in pickups and trailers. The debris commonly flies out on the road, causes an accident, and shuts down California’s main interior north-south lateral for several hours.

What is the common theme here?

When the liberal mind cannot cope with the concrete ramifications of its own ideology, it seeks a sort of tokenism. Unable to ensure that trees are not defaced? An ancient highway is not upgraded? Presto, zoom ahead to space-age high-speed rail, as if the conditions that created sprayed trees and mattresses lying among the pot-holes will not easily migrate to high-speed rail. That is, within 10 years I have no doubt that the Fresno-Corcoran (“rail to nowhere”) link will be periodically closed due to stripped copper wire conduit, mattresses thrown over the fence onto the tracks, and the general inability of the state to service the system due to the sort of daily vandalism seen at our local campgrounds.

If one third of the nation’s welfare population resides in California, and if seven million of the last ten million Californians added to the state population are now on Medicaid, and if Californians, as it is estimated, send approximately $10 billion a year in remittances to Mexico and Latin America, then something has to give. And the remedy for that something that gives is either teaching youth not to spray paint pine trees, or hiring unemployed ex-gang-bangers to pressure wash the graffiti off pine trees — or moving to a kinder, gentler Santa Cruz or Newport, feeling good on the beach, watching the sunset each evening, and cursing those evil conservatives who want to poison the 3-inch delta smelt and keep foie gras legal in California.

The Role of the Scapegoat When society cannot fathom that 16 youths were shot and another six killed last weekend in Chicago, it seeks symbolic relief. As I followed stories of the mayhem in the inner city of Chicago, I noted periodic news about the case of Trayvon Martin and the national outrage at George Zimmerman, who in a world of liberal jurisprudence has nonetheless mostly been tried and convicted in the court of public opinion. But because the Congressional Black Caucus cannot fathom what to do about the epidemic of black-on-black murder and even Rahm Emanuel was not successful after calling in Louis Farrakhan to keep the peace (and neither wishes to make even a rough connection between the violence and Great Society paternalism, the destruction of the black family, and a generation of youths raised without fathers on state assistance), they must seek a token — or rather, in anthropological terms, a scapegoat, some symbolic target to beat when crops fail and pestilence arrives. What is the alternative — lectures about flash-mobbing and sermons about the waste of buying $300 Lebron James signature sneakers?

The angrier we can become about Trayvon Martin, and the more our furor at George Zimmerman, the more we can square the circle of dealing with the Chicago killings (one murder occurred this week just three blocks from the Obama Chicago mansion. [I doubt Barack Obama will be returning to his home after his tenure ends in Washington]). If California has no clue what to do about its schools being reduced to near last in math and English test scores, its epidemic of uninsured drivers, its nearly 40% drop-out rates of Hispanic males in Central Valley high schools, and its 50%-plus rates of remediation of incoming freshmen in the state college system, then its needs a token solution. So it deals with the very real long-term consequences of illegal immigration by pushing for the Dream Act.

But tokenism is not the only reaction when postmodern liberal dreaming ends up in concrete premodern catastrophe. Escapism is a related response. I don’t think Dream Act supporters in Santa Monica or Atherton wish to live in, or visit much, Parlier or Orange Cove. When CSU presidents retire from Central Valley campuses, they usually frown and head to Palm Springs or Monterey. Doctrinaire liberalism is predicated on the notion of escapism, that one has the means and know-how to ensure that children do not go to the schools whose curriculum and policies follow your own utopian thinking. Or that you make sure your “wind and solar and millions of green jobs” windmills are obstructing someone else’s view. Or that the first high-speed rail link connects Fresno with Charles Manson’s prison in Corcoran rather than cutting a wide swath through Bay Area suburbs.

Medieval exemption is yet another response to liberalism. As I wrote in 2008, I watched with curiosity as tony Palo Alto neighborhoods sprouted bigger Obama campaign signs on their lawns, even though the owners were by definition one-percenter segregationists (East Palo Alto and Redwood City are a mile — and a solar system — away). The mansions of an Al Gore, John Kerry, and John Edwards are expiated by their owners’ always louder liberal outrage. No one really wishes to live in a world governed by the laws of contemporary liberalism. So the architects escape it and justify their flight by finding a suitable token, a convenient scapegoat, a secular priest like Obama to offer them penance for their sins of enjoying elite privilege.

When we talk of tokenism, escapism, or penance, we are still in world of symptoms, not the etiology of the malady. All can understand the very human desire to support a liberal crusader like Barack Obama among those who pay no income tax, belong to the near 50% who receive some sort of government aid, or are part of the one-sixth of the population on food stamps. Self-interest is an understandable motivation. It explains why the public employee and teacher naturally worry more about pay increases than the tax wherewithal to pay for them.

But for the more elite and influential progressive, affluence has allowed liberal orthodoxy to evolve to its theoretical limitations. There is a reason why 90% of professors — life-long tenure, summers off, guaranteed pay raises — are liberal and 70% of small-business people are conservative. The more removed one becomes from the elemental struggle to eat one more day — and never in the history of civilization have so many been so exempt from such existential worries — the more one enjoys the luxury of pondering more cosmic issues such as extending Social Security disability payments to youths suffering from attention deficit disorder or mandating gay history in state public schools or saving the smelt.

The problem, however, with modern redistributive liberalism is that it is predicated on a number of people not predicating their existences on just such modern liberal principles. When the natural gas fracker, the dairy owner, the cement contractor, and the software engineer either quit or move, then the Pine Flat campgrounds become, as they are now, the norm rather than the aberration.

A rich inheritance, a big law settlement, tenure, a movie deal, a state sinecure — these enablers of elite liberal thought are all predicated on the less-liberal productive classes creating wealth to shear. Behind every liberal philanthropist fortune is a huge capitalist score. Bill Gates and Warren Buffett can afford now to be liberal — an expensive indulgence — because in their early incarnations they were no-holds-barred capitalists who made lots of enemies conducting business without mercy and in search of pure profit. (In the 1980s and early 1990s Bill Gates’ Microsoft was cast as a Darth Vader enemy that had crushed the underdog, hip, and nearly insolvent Apple through piratical means.)

Put Sean Penn or George Clooney in a socialist Hollywood (one in fact, not in mere name), where the state ran the industry and the profits were divided evenly among actors, crews, and janitors (who is to say that Clooney “built” a film any more than the guy who swept the set after he got in his Mercedes and headed home?), and soon you would have a suddenly conservative Penn or Clooney, netting about $70,000 a year before taxes and without the wherewithal to jet to Caracas or hold a fund-raiser in Geneva — and furious that they were making the same as the guy who swept the set (as in most can sweep sets, but not all can be Sean Penns).

Affluence and poverty are the twins of liberalism. The former allows one to both dream and to escape that dream. The latter provides the fodder for liberal artillery.