As America continues to transition into a Third World nation, get used to this. 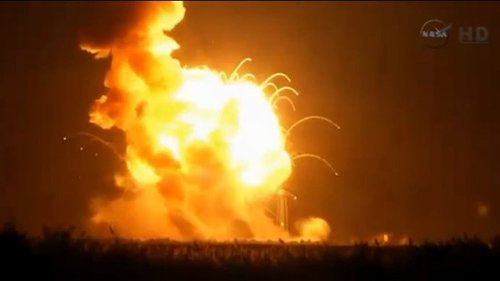 The launch was supposed to be the third of eight planned Orbital missions to ferry gear and food to astronauts aboard the ISS. The rocket had some 5,000 pounds of food, supplies and science experiments, which all were engulfed in a fireball just above NASA’s Wallop’s Island facility.

Luckily, no one was hurt.  As John Derbyshire wrote less than two weeks ago, America is a Can't Do Nation.

From inception to the Moon landing, Apollo ran nine years. Nowadays it would take nine years just to get the diversity quotas figured out.

Dennis is right: We can’t do stuff anymore. Go to the Moon, fight an epidemic: These things are beyond our capability now. Fifty years ago we were a nation of engineers and adventurers; now we’re a nation of lawyers and sociologists.

Don’t take my word for it. The current (first black—of course) head of NASA appointed by Barack Obama, told an interviewer four years ago that: "When I became the NASA administrator, [President Obama] charged me with three things. One, he wanted me to help re-inspire children to want to get into science and math; he wanted me to expand our international relationships; and third, and perhaps foremost, he wanted me to find a way to reach out to the Muslim world and engage much more with dominantly Muslim nations to help them feel good about their historic contribution to science, math and engineering."

Let me repeat that again S-L-O-W-L-Y:

…engage much more with dominantly Muslim nations to help them feel good about their historic contribution to science, math and engineering.

It’s been a sad decline, doubly sad for people who lived through it and can remember the days of glory, sadder yet for those of us who grew up in foreign parts admiring America from afar.