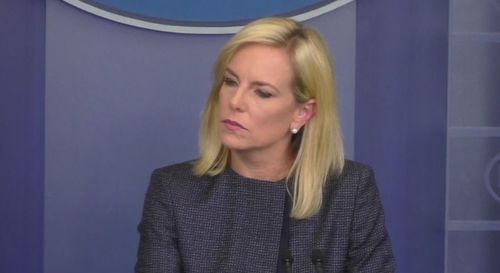 Via DHS, Secretary Kirstjen Nielsen, of whom we've been critical in the past, defends the DHS's actions at the border:

WASHINGTON - Today, Secretary of Homeland Security Kirstjen M. Nielsen delivered the below remarks at the White House Press Briefing on the illegal immigration crisis at the southern border:

SECRETARY NIELSEN: Good afternoon. It is my pleasure to be here because I would love to see if I can help explain some of what is going on and give you some of the facts. I know there have been a lot put out there but hopefully we clarify some things today. I just wanted to start by thanking the sheriffs of the United States, I had the privilege of speaking to them this morning at the National Sheriffs’ Association Conference. We are so thankful for their partnership here at DHS and all they do to protect our communities so, I thank them.  I want to provide you an update on the illegal immigration crisis on our Southern Border and the efforts the Administration is taking to solve this crisis and to stop the flood of illegal immigrants, drugs, contraband, and crime coming across the border. So let’s just start with a few numbers and facts.

So, in the last three months we have seen illegal immigration on our Southern Border exceed 50,000 people each month – multiples over each month last year. Since this time last year, there has been a 325 percent increase in Unaccompanied Alien Children and a 435 percent increase in family units entering the country illegally. Over the last ten years, there has been a 1,700% increase in asylum claims, resulting in an Asylum Backlog today, in our country of 600,000 cases.

At the same time, large criminal organizations such as MS-13 have violated our borders and gained a deadly foothold within the United States.

This entire crisis, just to be clear, is not new. It has been occurring and expanding over many decades. Currently, it is the exclusive product of loopholes in our federal immigration laws that prevent illegal immigrant minors and family members from being detained and removed to their home countries.  In other words, these loopholes create a functionally open border. Apprehension without detention and removal is not border security.

We have repeatedly called on Congress to close these loopholes. I myself have met with as many members that have been willing to meet with me, I’ve testified seven times. I will continue to make myself available to ask that they work with us to solve this crisis. Yet, the voices most loudly criticizing the enforcement of our current laws are those whose policies created this crisis – and whose policies perpetuate it.

In particular, we need to reform three major loopholes, let me quickly walk you through them. First, we need to amend the 2008 Trafficking Victims Protection Reauthorization Act or TVPRA, which is much easier to say – this law encourages families to put children in the hands of smugglers to bring them alone on the dangerous trek northward. And make no mistake, we’ve talked about this before, this trek is dangerous and deadly.

Third, we need to amend the Flores Settlement agreement and recent expansions which would allow allow for family detention during the removal process – and we need Congress fund our ability to hold families together through the immigration process.

Until these loopholes are closed by Congress, it is not possible – as a matter of law – to detain and remove whole family units who arrive illegally in the United States.

Congress and the courts created this problem, and Congress alone can fix it. Until then, we will enforce every law we have on the books to defend the sovereignty and security of the United States. Those who criticize the enforcement of our laws, have offered only one counter-measure: open borders – the quick release of all illegal alien families, and the decision not to enforce our laws. This policy would be disastrous, its prime beneficiaries would be the smuggling organizations themselves, and the prime victims would be the children who would be plunged into the smuggling machines and gang recruitment on the trip north.

There is a lot of misinformation about what DHS is and is not doing as it relates to families at the border, and I want to correct the record.

Here are the facts:

First, this Administration did not create a policy of separating families at the border.

We have a statutory responsibility that we take seriously to protect alien children from human smuggling, trafficking, and other criminal actions, while enforcing our immigration laws.

We have a long existing policy – multiple administrations have followed – that outline when we may take action to protect children.

We will separate those who claim to be parent and child if we cannot determine a familial or custodial relationship exists. For example, if there is no documentation to confirm the claimed relationship between an adult and a child.

We do so if the parent is a national security, public or safety risk, including where there are criminal charges at issue, and it may not be appropriate to maintain the family in detention together.

We also separate a parent and child if the adult is suspected of human trafficking. There have been cases where minors have been used and trafficked by unrelated adults in an effort to avoid detention. I’ll stop here to say that in the last five months, we’ve had a 314 percent increase in adults and children arriving at the border fraudulently claiming to be a family unit. This is, obviously, of concern.

And separation can occur when the parent is charged with human smuggling. Under those circumstances, we would detain the parent in an appropriate, secure detection facility, separate from the child.

What has changed is that we no longer exempt entire classes of people who break the law. Everyone is subject to prosecution.

When DHS refers a case against a parent or legal guardian for criminal prosecution, the parent or legal guardian will be placed into U.S. Marshals Service custody for pre-trial detention pursuant to an order by a federal judge and any accompanying child will be transferred to the Department of Health and Human Services and will be reclassified as an Unaccompanied Alien Child.

That is in accordance with the TVPRA—a law that was passed by Congress—and a following court order – neither are actions the Trump Administration has taken.

And let’s be clear – if an American were to commit a crime anywhere in the United States, they would go to jail and be separated from their family.  This is not a controversial ideal.

Second, children in DHS and HHS custody are being well taken care of.

The Department of Health and Human Services’ Office of Refugee Resettlement provides meals, medical care, and educational services to these children. They are provided temporary shelter, and HHS works hard to find a parent, relative, or foster home to care for these children.

Parents can still communicate with their children through phone calls and video conferencing.

And a parent who is released from custody can be a sponsor and ask HHS to release the child back into their care.

Further, these minors can still apply for asylum and other protections under U.S. immigration law if eligible.

We take allegation of mistreatment seriously and I want to stress this point. We investigate, we hold those accountable when and if it should occur. We have some of the highest detention standards in the country. Claiming these children and their parents are treated inhumanely is not true, and completely disrespects the hardworking men and women at the Office of Refugee Resettlement.

Illegal entry is a crime as determined by Congress.

By entering our country illegally—often in dangerous circumstances—illegal immigrants have put their children at risk.

Fourth, CBP and ICE officers are properly trained to care for minors in their custody.

DHS and HHS treats all individuals in its custody with dignity and respect, and complies with all laws and policy.

This reinforces and reiterates the need to consider the best interest of the children and mandates adherence to established protocols to protect at-risk populations, to include standards for the transport and treatment of minors in DHS and HHS custody.

Additionally, all U.S. Border Patrol personnel on the southwest border are bilingual. Every last one of them. They are directed to clearly explain the relevant process to apprehended individuals, and provide detainees with written documentation—in both Spanish and English—that lays out the process and appropriate phone numbers to contact.

And finally, DHS is not separating families legitimately seeking asylum at ports of entry.

If an adult enters at a port of entry and claims asylum, they will not face prosecution for illegal entry. They have not committed a crime by coming to the port of entry.

We have a duty to protect the American people, and it’s one that I take very seriously.

Here is the bottom line: DHS is no longer ignoring the law. We are enforcing the laws as they exist on the books. As long as illegal entry remains a criminal offense, DHS will not look the other way. DHS will faithfully execute the laws enacted by Congress as we are sworn to do.

As I said earlier today, surely it is the beginning of the unraveling of democracy when the body who makes the laws – instead of changing them – tells the enforcement body not to enforce the law.

I ask Congress to act this week so that we can secure our borders and uphold our humanitarian ideas. These two missions should not be pitted against each other. If we close the loopholes we can accomplish both.

Before I take questions, I just want to ask that in your reporting, please consider the men and women of DHS who are dedicated law enforcement officers who often put their lives at risk. Let’s remember their sacrifice and commitment to this country. And with that I’ll take some questions.