Despite Hillary’s Claims, Border Lawlessness Is Worse Than Ever

Out on the campaign trail, Hillary Clinton has recently been saying that America’s southern border is secure, so let’s get going on that amnesty for millions of future Democrats.

But is it true that the border is under control? What do front-line law enforcement officers see in the real world?

Sheriff Paul Babeu appeared on Fox with Neil Cavuto the other day for an update on the state of the border. Cavuto noted the noisy illegal alien squawkers at a Trump rally and asked a question that I’ve often had — Why don’t the police bring a fleet of paddy wagons and mass arrest those foreign lawbreakers?

CAVUTO: A good many of these [protesters] by the way are illegals themselves which brings me to Paul Babeu, the Pinal County Arizona sheriff. Sheriff, what always interests me when I see illegals protesting is why ICE or other officials can’t or don’t arrest them on the spot.

PAUL BABEU: Great question. Maybe because they take the approach that it would be an infringing on their freedom of speech. But what about the other laws that they’re breaking?. . . When it comes to immigration laws, there is no debate here, it’s complete lawlessness. There are no consequences for breaking immigration law, and that’s what we have here. That’s why we see a 131 percent increase in families coming across, over the past six months alone, the Mexican border into the United States, is because the message has gone out — make it to the border and you’re home free. There’s deferred action for twelve to 20 plus million illegals right now under Obama. And sadly, Hillary Clinton has already announced — gone a step further than Obama, and says that she’s going to actually put them on a path to citizenship. So, this is outrageous, it’s unacceptable, anybody who questions whether they can support Donald Trump or not — there’s such a stark contrast, our safety, not only in our communities, but our entire country, our national security is on the line here, and there is no real choice when it comes to, do we support Donald Trump? It’s a resounding yes.

CAVUTO: All right, that’s where you’re coming from; I can appreciate that, but one of the things interesting me, and ICE is refuting these statistics, Sheriff, that nearly 20,000 criminal illegal immigrants were let go even though they knew of their criminal background. ICE says that was not the case, but you’ve seen evidence of those that you turned over to officials are let loose again. Sheriff Joe Arpaio has so much to say over these many years. Why does that happen? Because net net the return rate of illegals of any sort, criminal or otherwise, has slowed to a trickle. Why is that?

BABEU: Well this whole idea of there’s no consequences, the fact that they’re releasing 208 actual convicted murderers last year who are illegals who have no business in this country, 900 plus that were convicted of rape, sexual assault and child molestation, and the answer we get back from ICE is, well we don’t have proper travel documents or other countries won’t accept them back, and that’s not a legitimate excuse, They’ve released 500 plus of these criminals in Pinal County Arizona alone. They released a murderer in in Florence in my county seat, and they tell me the sheriff two weeks after the fact. And this guy’s from Russia. So it’s not a question of they’re all from Mexico. We had two murderers, and one was from Sudan and one was from Russia and other from Iraq. So the system is broken and that’s what we need to correct. Enforce the laws that are on the books.

CAVUTO: Thank you very much.

Below, here are the illegal alien criminals released by the feds that Sheriff Babeu mentioned — (left to right) Musa Salah Abdelaziz Abdalla, Dennis Valerievitch Tsoukanov and Nasser Hanna Hermez. All have lengthy criminal histories but were let go into American communities by ICE anyway. 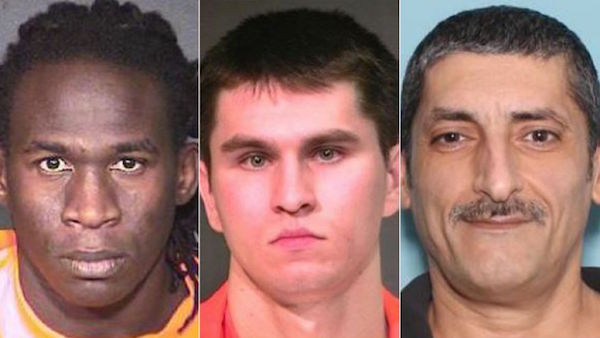