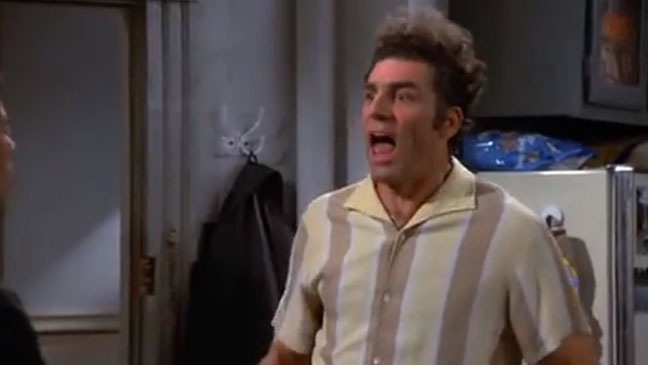 But the reality is that there is far more tolerance for a white person's unseemly behavior than for similar behavior of somebody who isn't white, especially if the unseemliness involves race. [Michael] Richards' "racist rant" has been described as a terrible but isolated incident. O.J., meanwhile, is condemned for his character

No, OJ's condemned for damn near sawing two people's heads off, plus whatever else he did to Ron Goldman. Speaking of Michael Richards, whose Kramer character on "Seinfeld" might have been the consistently funniest supporting character in the history of American television, comparable to Andrew Sach's Manuel on "Fawlty Towers," I'm reminded that Tom Wolfe anticipated Kramer in a courtroom scene in 1987's Bonfire of the Vanities:

It was Albert Krnkka. He was waving his right hand, trying to get [Judge] Kovitsky's attention. His arms hung open in a half smile that was supposed to convince the judge that he was a reasonable man. In fact, he looked, every inch of him like one of those wild tall raw-boned men whose metabolisms operate at triple speed and who, more than any other people on earth, are prone to explosions.

Kovitsky stared, amazed by this performance. 'Hey, Judge! Look. Two weeks ago she told us two to six, right?'

When Albert Krnkka said "two to six," he raised both hands up in the air and stuck out two fingers on each hand, like a v for victory or a peace sign, and flailed them in the air, as if he were beating a pair of invisible aerial drums in time to the the phrase "two to six." ...

Larry Kramer moved over to where Patti Stulleri was standing and said, "What did they do?"

Patti Stulleri said, "The wife held a knife to a girl's throat while the husband raped her."

"Jesus," said Kramer in spite of himself.

He proved to be one of those tall, rawboned, rangy young men with alarmingly bright eyes, who more than any other sort of human, in my experience, are prone to manic explosions. Hunter didn't so much have a conversation with you as speak in explosive salvos of words on a related subject.

I don't know anything about Michael Richards off-camera, but I expect nobody could play Kramer for that long and that well without being rather like Kramer. Even if you are just acting when you start out, after 9 years, you are a little bit Kramer. The classic depiction of this tendency is Martin Landau's tremendous performance in "Ed Wood" as the elderly, washed-up Bela Lugosi, who after 25 years of playing Dracula, can't separate his main character from himself anymore.