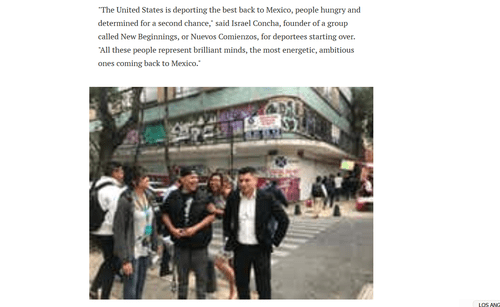 Deported Mexicans Adjust to Their Own Country

News stories about deportees at home are curious mixtures, filled with the emotion and confusion of persons readjusting to their actual countries. They sought to steal jobs, education and benefits from American workers and taxpayers, but now must work hard to make their lives function in Mexico and beyond.

When an area of Mexico City is known as Little L.A., It shows how extreme illegal immigration has become. Newly deported Mexicans are trying to adjust to new surroundings where it appears they are not entirely accepted by the locals, some of whom call the newbies “trash.”

Deported Mexicans settle down to a life of hope and dismay in Mexico City’s ‘Little L.A.’, By Alfredo Corchado, Dallas Morning News, July 28, 2018

MEXICO CITY – In one of Mexico’s most storied neighborhoods, the number of newcomers continues to grow with every deportation.

Neighbors aren’t quite sure what to make of them. Some say they’re agents of change, some call them yesterday’s trash.

As the drama of family separations from Central America plays out across the United States, here in Mexico, an unusual reunification is quietly taking shape as Mexicans who lived most of their lives north of the border embrace their new lives back where they were born. As labor shortages increase across the U.S. and the number of Mexicans in the country decreases, a question arises: Where did the Mexicans go?

Many returned here, to Little L.A.

These days, so many of Mexico’s sons and daughters have been deported from the U.S. that the Colonia Tabacalera neighborhood, home to the Monument to the Revolution, is increasingly known as Little L.A.

“The United States is deporting the best back to Mexico, people hungry and determined for a second chance,” said Israel Concha, founder of a group called New Beginnings, or Nuevos Comienzos, for deportees starting over. “All these people represent brilliant minds, the most energetic, ambitious ones coming back to Mexico.”

Interesting how Mexicans seem to have an unduly high opinion of themselves. Still, Mexico is a rich country (#15 in world GDP), so these “brilliant minds” are sure to be successful.

In the first five months of 2018, the U.S. deported an estimated 93,365 Mexicans, up from 63,352 in the same time period last year, according to Mexico’s Interior Ministry. Many returned to communities across Mexico.

More than 2.5 million undocumented immigrants were deported under eight years of President Barack Obama. The majority of deportations under Obama took place at the beginning of his presidency while his administration pursued a broad goal of achieving immigration reform through legislation, according to the Migration Policy Institute.

But under the Trump administration, many immigrants, both legal and unauthorized, are treated as unwelcomed. President Donald Trump has derided immigrants from “s— hole countries” and repeatedly warned citizens that immigrants are causing crime across the U.S. Groups like the Washington Office on Latin America have noted that in some parts of the U.S., immigrants are viewed as inferior, a threat to national security and to American jobs. (Continues)