What does it take to get a lawbreaking terror-connected foreigner deported these days? The question comes up regarding the case of Ailina Tsarnaev, a sister of the Boston Marathon bombing brothers. She was charged in August with aggravated harassment for threatening to “put a bomb on you” to an unnamed woman. Yet this stupid-generous country allows her to remain.

Remember that the entire Tsarnaev family entered under asylum with a false claim of persecution, belied when the father moved back to Dagestan a few years ago, followed later by his wife after she was accused of shoplifting. In fact, the whole family was involved in crime, including theft, counterfeiting and drug dealing, as well as mooching maximum benefits from Massachusetts taxpayers. The latter is not surprising since hostile Muslims regard scrounging welfare from infidel governments as part of jihad.

Judge Jeannine Piro probed the deportation question on Sunday. Unfortunately, the State Department has a lot to say about the deportation of people they admitted under asylum rules. Former U.S. Spokesman at the United Nations spokesman Rick Grenell observed that it would help if some member of Congress raised a stink about the case. 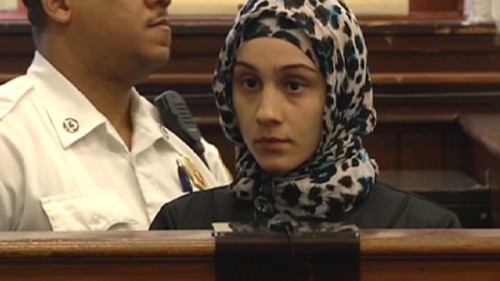 Here’s a story about the bomb threat:

A sister of the Boston Marathon bombing suspects was arrested in New York on Wednesday after allegedly threatening a woman in a domestic harassment case, saying, “I have people that can go over there and put a bomb on you.”

Ailina Tsarnaev of North Bergen, N.J., was arrested at a police station in New York City Wednesday afternoon, charged with one count of aggravated harassment. She was released with a summons to return to a criminal court in Manhattan on Sept. 3, said police Lieutenant John Grimpel.

Grimpel said the victim of Ailina Tsarnaev’s alleged threat has a child with the father of one of Tsarnaev’s children. Grimpel did not elaborate on the nature of the dispute.

Tsarnaev told police she is 21, though she is believed to be three years older.

Her brother Dzhokhar Tsarnaev, 21, is awaiting trial in federal court, accused, along with his older brother, Tamerlan, of setting off the April 15, 2013, bombs at the Boston Marathon that killed three people and injured more than 260.

Ailina and another sister, Bella Tsarnaev, have visited their brother at the federal prison in Fort Devens in Ayer, where he is being held. Defense lawyers have sought to have private conversations with Dzhokhar Tsarnaev and his sisters as they seek to learn more about their family. They expect to argue that Dzhokhar Tsarnaev was pressured to participate in the bombings by his brother.

Ailina Tsarnaev has been arrested before. She was charged with impeding a 2010 investigation into counterfeiting, and later failed to appear in court. The investigation was based on the passing of a counterfeit bill at an Applebee’s restaurant in Dorchester. She is not accused of passing the fake currency, but police say she knew members of the group that did.

The two Tsarnaev sisters are believed to be staying together in New Jersey, and New York media outlets recently reported that Tamerlan Tsarnaev’s widow, Katherine Russell, who had a child with him, recently moved in with them.