There have been concerned discussions going around about how Obama and his Congressional henchpersons might use the post-election lame-duck session to push through various unpopular items of legislation, in particular an amnesty for millions.

Today’s Wall Street Journal noted the interest of powerful Democrats to jam through legislation they regard as vital to their agenda such as card check for unions and a massive energy tax. Author John Fund didn’t mention any immigration bills, but he is something of an open-borders guy. 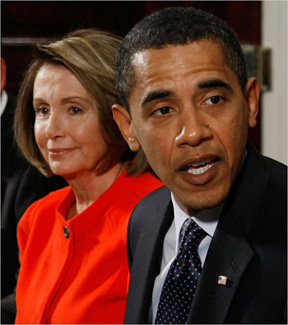 From the sound of these politicians quoted, insulting the will of the voters by abusing the lame duck session does not appear to faze the Democrats one little bit.

Democratic House members are so worried about the fall elections they’re leaving Washington on July 30, a full week earlier than normal—and they won’t return until mid-September. Members gulped when National Journal’s Charlie Cook, the Beltway’s leading political handicapper, predicted last month “the House is gone,” meaning a GOP takeover. He thinks Democrats will hold the Senate, but with a significantly reduced majority.

The rush to recess gives Democrats little time to pass any major laws. That’s why there have been signs in recent weeks that party leaders are planning an ambitious, lame-duck session to muscle through bills in December they don’t want to defend before November. Retiring or defeated members of Congress would then be able to vote for sweeping legislation without any fear of voter retaliation.

“I’ve got lots of things I want to do” in a lame duck, Sen. Jay Rockefeller (D., W. Va.) told reporters in mid June. North Dakota’s Kent Conrad, chairman of the Senate Budget Committee, wants a lame-duck session to act on the recommendations of President Obama’s deficit commission, which is due to report on Dec. 1. “It could be a huge deal,” he told Roll Call last month. “We could get the country on a sound long-term fiscal path.” By which he undoubtedly means new taxes in exchange for extending some, but not all, of the Bush-era tax reductions that will expire at the end of the year.

In the House, Arizona Rep. Raul Grijalva, co-chairman of the Congressional Progressive Caucus, told reporters last month that for bills like “card check”—the measure to curb secret-ballot union elections—”the lame duck would be the last chance, quite honestly, for the foreseeable future.”

Iowa Sen. Tom Harkin, chair of the Senate committee overseeing labor issues, told the Bill Press radio show in June that “to those who think [card check] is dead, I say think again.” He told Mr. Press “we’re still trying to maneuver” a way to pass some parts of the bill before the next Congress is sworn in.

It’s been almost 30 years since anything remotely contentious was handled in a lame-duck session, but that doesn’t faze Democrats who have jammed through ObamaCare and are determined to bring the financial system under greater federal control.

That list is ugly enough, but former Congressman Tom Tancredo is concerned about a massive amnesty rammed into law against the will of the voters:

The larger question is what will the Republican leadership in Congress do to block Obama’s plan for national suicide? If Obama goes ahead with the plan devised by the Congressional Hispanic Caucus – a plan to enact amnesty over the objections of the American people in a lame-duck session of Congress – what can be done to stop it?

There are two ways to defeat the enactment of amnesty in a lame-duck session of Congress. The best and surest way is to force the 40 to 50 so-called “Blue Dog Democrats” to disavow the plan and pledge to vote against it if they hope to be re-elected in November.

A second way is open for citizens who see a rogue government intent on destroying their constitutional liberties. We might see 1 million Americans descend on Washington, D.C., to physically obstruct the enactment of amnesty legislation by a lame-duck Congress.

It is often said that in a time of crisis, new leaders rise to the occasion. Now would be a good time for new leaders to arise from Republican ranks, because we are not seeing much leadership from the current gang.

So voting out Obama’s open-borders globalists may not be the end game this year. Stay tuned.