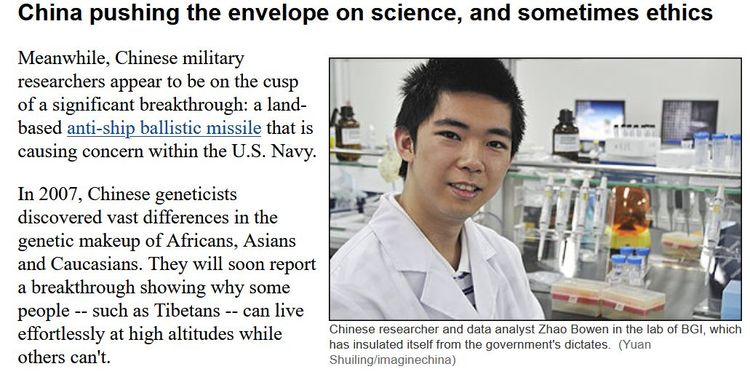 China pushing the envelope on science, and sometimes ethics By John Pomfret

SHENZHEN, CHINA — Last year, Zhao Bowen was part of a team that cracked the genetic code of the cucumber. These days, he's probing the genetic basis for human IQ.

Centuries after it led the world in technological prowess — think gunpowder, irrigation and the printed word — China has barged back into the ranks of the great powers in science. With the brashness of a teenager, in some cases literally, China's scientists and inventors are driving a resurgence in potentially world-changing research.

Unburdened by social and legal constraints common in the West, China's trailblazing scientists are also pushing the limits of ethics and principle as they create a new — and to many, worrisome — Wild West in the Far East.

A decade ago, no one considered China a scientific competitor. Its best and brightest agreed and fled China in a massive brain drain to university research labs at Harvard, Stanford and MIT.

But over the past five years, Western-educated scientists and gutsy entrepreneurs have conducted a rearguard action, battling China's hidebound bureaucracy to establish research institutes and companies. Those have lured home scores [i..e., at least 40] of Western-trained Chinese researchers dedicated to transforming the People's Republic of China into a scientific superpower.

"They have grown so fast and so suddenly that people are still skeptical," said Rasmus Nielsen, a geneticist at the University of California at Berkeley who collaborates with Chinese counterparts. "But we should get used to it. There is competition from China now, and it's really quite drastic how things have changed."

... China has jumped to second place — up from 14th in 1995 — behind the United States in the number of research articles published in scientific and technical journals worldwide.

Backed by the Bill and Melinda Gates Foundation, Chinese medical researchers, partnering with a firm in the United States, beat out an Indian team last year to develop a new test for cervical cancer that costs less than $5. The goal is to test 10 million Chinese women within three years. ...

Meanwhile, Chinese military researchers appear to be on the cusp of a significant breakthrough: a land-based anti-ship ballistic missile that is causing concern within the U.S. Navy.

In 2007, Chinese geneticists discovered vast differences in the genetic makeup of Africans, Asians and Caucasians. They will soon report a breakthrough showing why some people — such as Tibetans — can live effortlessly at high altitudes while others can't.

In 2008, the Ministry of Science and Technology gave researchers two years to come up with 30 medicines ready for clinical trials and only five days to apply for grants to fund the work. That's despite the fact that since the communist revolution in 1949, China has developed only one internationally recognized drug — Artemisinin — to fight malaria.

Chinese science and technology is also awash in scams and sometimes-troubling practices. More than 200 institutions in China practice controversial stem cell therapies for people suffering from injuries, diseases or birth defects. Although the government moved last year to regulate the industry, none of the techniques has been subjected to rigorous clinical trials.

China is also the leading source of what are known as "junk" patents — ridiculous claims of "inventions" that are little more than snake-oil scams.

"This discovery is going to shake the world!" bellowed Liu Jian, chief executive of Hualong Fertilizer Technique Co. Liu says he has developed a method to reduce fertilizer use by half through the use of nanotechnology, although officials at the Agriculture Ministry mock the claim. "Will you help us raise some capital?" Liu asked in an interview.

Finally, plagiarism and doctored results seem to be as common as chopsticks. A study by Wuhan University uncovered an entire industry of bogus report and thesis writers who raked in $145 million last year, a fivefold increase since 2007.

The emergence of China as a nascent scientific superpower raises questions about the U.S. relationship with Beijing. Ever since the United States opened the door to Chinese students in the 1970s, hundreds of thousands have flocked to America. Most have studied science or engineering and have been welcomed in research institutions across the land. But with China becoming a competitor, U.S. experts have begun to question that practice.

FBI officials allege that there is a large-scale operation in the United States to pilfer American industrial, scientific, technological and military secrets. In the past few years, dozens of Chinese have been convicted of stealing American technology and shipping it to China.

"The science and technology relationship with China has always stood up against all kinds of political pressures," said Richard P. Suttmeier, who has researched China's rise for the National Science Foundation. "Now that you have competition going on, finding the basis for cooperation in the absence of trust is an issue. It goes to questions of espionage and a hunger for technology."

That hunger is evident in the halls of BGI, home to Zhao Bowen and more than 1,500 other Chinese scientists and technicians. Located in an industrial zone in the southern Chinese megalopolis of Shenzhen, BGI has grown into one of the world's leading genomics institutes devoted to deciphering the genetic blueprint of organisms.

Over the past few years, scientists at BGI sequenced the genes of a chicken, a silkworm, a panda, a strain of rice and 4,000-year-old human remains from Greenland.

In January, BGI made the biggest purchase of genome sequencing equipment ever, buying 128 ultra-high-tech machines from California-based Illumina. With that one acquisition, BGI could very well surpass the entire gene-sequencing output of the United States.

Inside the 11-story facility, the vibe is pure Silicon Valley start-up: shorts, flip-flops, ankle bracelets, designer eyewear and a random tattoo. Zhao came to BGI on a summer internship last year to work on cucumbers. Now a full-time employee while continuing his studies, Zhao is turning his attention to a topic Western researchers have shied away from because of ethical worries: Zhao plans to study the genes of 1,000 of his best-performing classmates at a top high school in Beijing and compare them, he said, "with 1,000 normal kids."