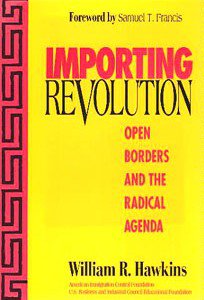 The late Sam Francis wrote the Foreword to William Hawkin's Importing Revolution: Open Borders and the Radical Agenda.  The point of the book is to show that mass immigration is designed to deliberately create a permanent source of instability and conflict.  Now, as the leftists say, the chickens are coming home to roost.

Democratic State Representative and candidate for U.S. representative Pat Murphy said Tuesday that if the underage migrants who have come to the U.S. from Central America aren’t given a “pathway for citizenship” they could become terrorists.

Speaking with Iowa Public Radio host Ben Kieffer, Murphy said that “we need to make sure that we take care of the children that are coming up here.”

“They’re not from Mexico, they’re coming from further south,” Murphy continued. “We need to make sure that when we’re talking about these children we need to treat them like they’re our children or our grandchildren. If they’re gonna be refugees, which several of them are going to be, we need to make sure that we have—one, we take care of them, and we create a pathway for citizenship and set up education for them so they don’t become the same problem that we’re currently having in the Middle East—that they’ll be terrorists a generation from now.”

What Murphy doesn't seem to get is that this is a feature, not a bug of mass immigration.  The point is that we now have a permanently aggrieved population that must be given handouts or else it will respond with violence.

That's why it was brought here in the first place - to displace the historic American nation, and replace it with another.