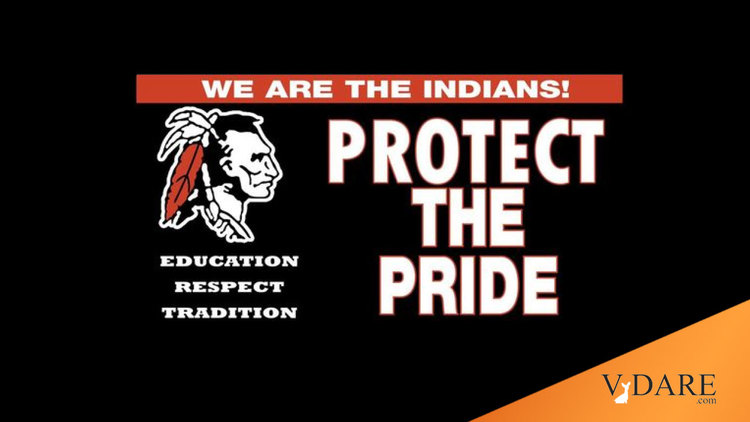 Earlier: Should the Land of the Free be the Home of the Braves?

Here’s  another hypocritical story about how the same people who are crying about the January 6 protesters threatening our "sacred democracy," now just want to ignore the will of the people in Cambridge, New York.

The story in Cambridge, New York is a familiar one happening all over the country, where a sports mascot that originated in viewing Native Americans as fighting warriors has now become something to purge during the Great Awokening. This story began when a local Native American or "indigenous Peoples" activist started a petition to change the local school's mascot from the "Indians." Annoying white liberals hoping to score racial justice brownie points soon jumped on the bandwagon. The New York Times reported about it in January but made a point to downplay that the vast majority of town residents are opposed to the change.

As the New York Times bemoaned:

The [McMillans] joined a local campaign to retire the Cambridge “Indians,” which for more than a half-century has stood as a familiar symbol of school and hometown pride. The campaign grew more resolute as Black Lives Matter protests raised issues of inequality and as many schools across the state and the country removed Native American-themed nicknames and logos. In professional sports, the Washington Football Team dropped its old name in 2020 and the Cleveland Indians recently became the Guardians.

But what the McMillans and some others hoped would be a teachable moment in the predominantly white town has been met with relentless backlash: Friendships have been severed and obscene gestures have been exchanged. Lawn signs emblazoned with the logo and a slogan, “Restore the Pride,” have become ubiquitous. The same message appears on a billboard near the town’s K-12 school.

The New York Times then begrudgingly admits that the majority of residents don't agree with their annoying liberal neighbors.

Many supporters of keeping the mascot have dismissed concerns as political correctness gone amok, a movement spearheaded by a small group of liberals, many of whom have perhaps not lived in town long enough to realize that many nearby districts have similarly themed names, including the Mechanicville Red Raiders, the Averill Park Warriors and the Lake George Warriors...

Each time the McMillans and others get closer to the retirement of the name, the opposition — a strong, solid majority  —  complicates their efforts.

A strong, solid majority stopping a small minority from imposing its will on the public? Isn't that what Democracy is all about? The New York Times then omitted one critical detail from their reporting; that "strong, solid majority" organized and ran two pro-mascot candidates in school board elections who won in a landslide.

The two pro-mascot candidates for Cambridge school board won in a landslide Tuesday, getting more than twice as many votes as the others.

[Cambridge voters back pro-mascot school board candidates,  by Kathleen Moore and Michael Goot, Post Star, May 18, 2021]

In a retaliatory action, the lame duck members of the school board who lost their reelection then voted to change the name. But since Democracy is sacred and the people had spoken, the new school board members made it their first vote as soon as they took office to reinstate the Indian mascot. Or as the New York Times reported it:

In June, after months of contested school board elections and combative monthly meetings, the school board voted to retire the name. But a month later, it voted to reverse the decision.

Take note of how they completely skipped over the fact that there was an election in which the pro-mascot side won in a landslide. Those details are unimportant according to the New York Times because apparently adherence to democracy isn't all that important when the voters are "predominantly white."

After suffering this defeat at the ballot box and having their signature issue overturned by the will of the electorate, the annoying whiny liberals engaged in some decidedly undemocratic maneuvering.

In response, the McMillans and six other parents petitioned state education officials, who oversee individual school districts and boards, to intervene. In November, the state’s education commissioner, Betty A. Rosa, ruled in their favor and ordered the district to retire the name and logo by July 2022 or face consequences that could include the withholding of state education funding and the removal of school board personnel.

Wow! So that's how they operate! Democracy is sacred but only if the results align with the anti-white agenda. If the voters choose otherwise, then all bets are off! Rosa is your typical affirmative action appointee with an axe to grind against rural white Americans but the residents of Cambridge are not taking it lying down.

On Wednesday night, the school board voted to challenge Rosa’s ruling in court. In a 3 to 2 vote, Board members said the education department’s order unfairly singled out their district.

It's nice to see our people are still fighting the good fight but we need to realize that not even voting in large numbers and overwhelmingly winning elections will be enough to stop our opposition from implementing their agenda. New York is a lost cause too as the courts are stacked with anti-white appointees and the Democrat dominated state legislature is already prepared to pass a law which ensures that "no public school uses a native name, logo, or mascot." The silver lining is that our opposition can only continue to engage in tactics like this for so long before there is a massive backlash. When it happens, if it happens, who knows what form it will take?