A prominent trauma surgeon at Johns Hopkins Hospital who survived being shot as a teen and advocates nationally for gun violence prevention says he recently had a “death threat” placed on the windshield of his car.

Dr. Joseph Sakran posted images of the alleged threat — a sheet of paper featuring a hand pointing a gun straight ahead, with the message “The End is Near” beneath it — on Twitter late Saturday afternoon. It quickly gained notice and retweets within the gun-violence prevention community, including by Parkland, Florida, shooting survivor David Hogg.

Sakran, who operates on gunshot victims in Baltimore, said he plans to report the incident to law enforcement, in part at the urging of others who saw his tweets.

In an interview with The Baltimore Sun, he said he believed the paper was placed on his car, parked near his parents’ home in Northern Virginia, sometime on or before Jan. 20 — which was the Martin Luther King Jr. holiday and the same day as a gun rights rally in Richmond, the state’s capital.

… Sakran, 42, said he recalls grabbing what he thought was a flier off his windshield on the morning of Jan. 21 as he made his way into work at the U.S. Capitol, where he is serving as a Robert Wood Johnson Foundation health policy fellow. Sakran took a sabbatical from his position as director of emergency general surgery at Johns Hopkins Hospital to take the fellowship.

He said he took no notice of what was on the paper that morning, distracted by thoughts about his new job. But days later, as he was cleaning out his car, he took a closer look and realized what it was with a jolt, he said.

“I was like, ‘Oh my gosh,’” he said. “A lot of emotions went through me, to be honest with you, having been a survivor — and also for my family.”…

Sakran said he couldn’t help but wonder whether his national advocacy work had caused someone to target him.

In 2018, he dove headlong into an online debate around the role of medical doctors in gun policy discussions, after the National Rifle Association tweeted a link to a commentary on that role, writing, “Someone should tell self-important anti-gun doctors to stay in their lane."…

He also created the @ThisIsOurLane handle, based on the hashtag #ThisIsOurLane that medical professionals were using to respond to the NRA.

Sakran has since testified on Capitol Hill about gun violence and policies he believes should be adopted, including universal background checks for gun owners.

After finding the alleged threat in his car, Sakran said, he took a couple of pictures — placing it back on his windshield for one — and then threw it in the trash, ready to ignore it. On Saturday, he changed his mind. 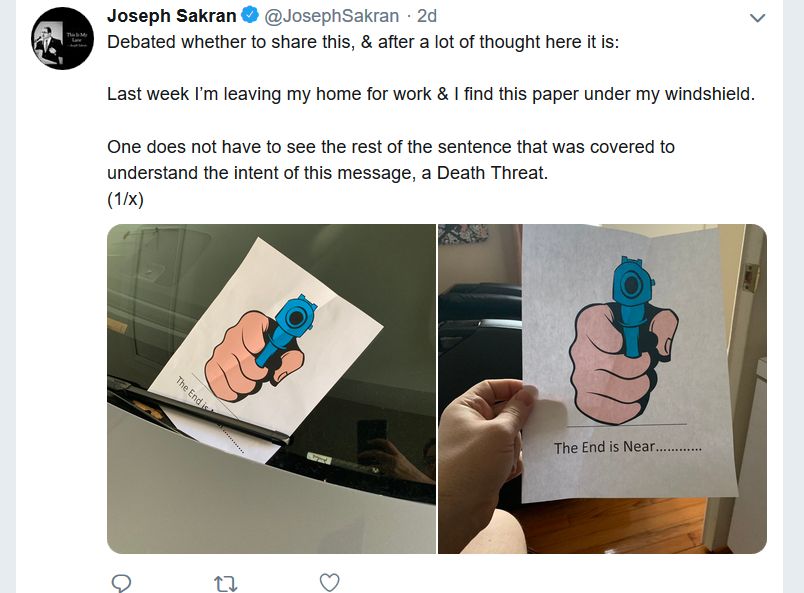