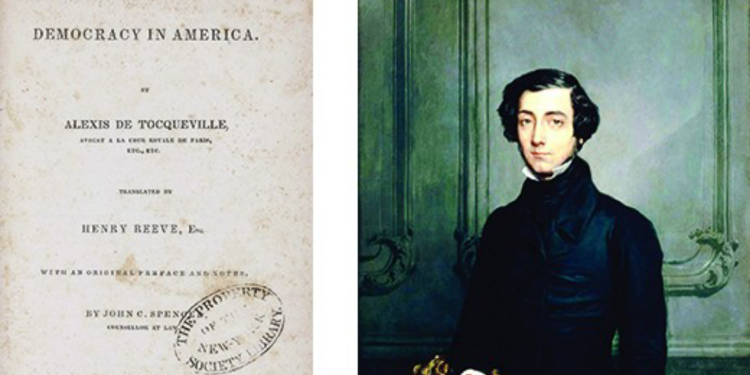 De Tocqueville On The National Question

One of our perceptive supporters has called our attention to these passages, from Alexis de Tocqueville's Democracy in America.

(The translations vary, of course, De Tocqueville's book was originally published in the French language as De la démocratie en Amérique.  These quotations are from the edition translated by George Lawrence and edited by J-P. Mayer. It is still in copyright.  Honesty is the best policy, but you can read the whole of book 1, chapter 8 online.)

"The Constitution of the United States is like one of those beautiful creations of human diligence which give their inventors glory and riches but remains sterile in other hands.

"Contemporary Mexico has shown that.

"The Mexicans, wishing to establish a federal system, took the federal Constitution of their Anglo-American neighbors as a model and copied it almost completely. But when they borrowed the letter of the law, they could not at the same time transfer the spirit that gave it life. As a result, one sees them constantly entangled in the mechanism of their double government. The sovereignty of the states and that of the union, going beyond the spheres assigned to them by the constitution, trespass continually on each other's territory. In fact, at present Mexico is constantly shifting from anarchy to military despotism and back from military despotism to anarchy." [Page 165]

"How, then, does it come about that the American Union, protected though it be by the comparative perfection of its laws, does not dissolve in the midst of a great war? The reason is that it has no great wars to fear.

"Placed in the middle of a huge continent with limitless room for the expansion of human endeavor, the Union is almost as isolated from the world as if it were surrounded on all sides by the ocean.

"The population of Canada is no more than a million and is divided into two hostile nations. The rigors of the climate limit the expansion of its territory and shut its ports for six months of the year.

"From Canada to the Gulf of Mexico there are only some half-destroyed savage tribes, which six thousand soldiers drive before them.

"To the south, at one point the Union touches the Mexican Empire; it is there that one day great wars will probably come. But for a long time to come the backward state of civilization, corruption of mores, and poverty will prevent Mexico from taking high rank among the nations." [Page 169]

Mexico doesn't seem to have changed, except that a lot of it (and its "spirit") is now here. But the U.S. now has much less margin for Error.