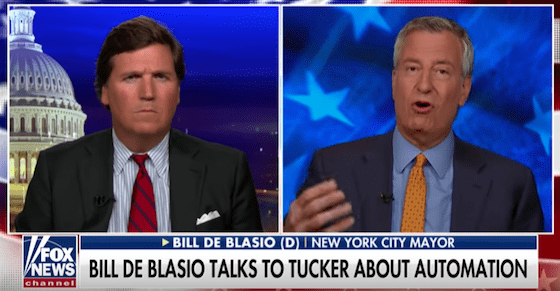 On Thursday, Mayor Bill de Blasio appeared on Tucker Carlson’s show to discuss his presidential campaign along with the issue of automation, specifically how it threatens the jobs of millions of Americans in the near future. 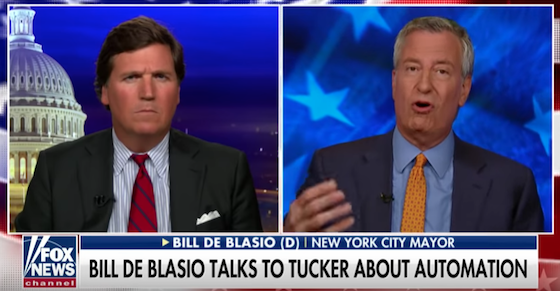 An article written by de Blasio appeared in Wired the same day, titled Why American Workers Need to Be Protected From Automation, which is a topic more leaders should be addressing. The article is decent, but if anything, it underestimates the effect that the permanent removal of perhaps the majority of workers from the economy will mean. The adjustments to society will take decades.

The mayor’s Wired article cites only one study (from Brookings) showing why automation is a threat to the nation’s future, but there are many out there. Oxford researchers forecast in 2013 that nearly half of American jobs were vulnerable to machine or software replacement within 20 years. Rice University computer scientist Moshe Vardi believes that in 30 years humans will become largely obsolete, and world joblessness will reach 50 percent. The Gartner tech advising company believes that one-third of jobs will be done by machines by 2025. The consultancy firm PwC published a report last year that forecast robots could take 38 percent of US jobs by 2030. In November 2017, the McKinsey Global Institute reported that automation “could displace up to 800 million workers — 30 percent of the global workforce — by 2030.” Forrester Research estimates that robots and artificial intelligence could eliminate nearly 25 million jobs in the United States over the next decade, but it should create nearly 15 million positions, resulting in a loss of 10 million US jobs. Kai-Fu Lee, the venture capitalist and author of AI Superpowers: China, Silicon Valley, and the New World Order, forecast on CBS’ Sixty Minutes about automation and artificial intelligence: “in 15 years, that’s going to displace about 40 percent of the jobs in the world.” A February 2018 paper from Bain & Company, Labor 2030, predicted, “By the end of the 2020s, automation may eliminate 20% to 25% of current jobs.”

So now there are two 2020 candidates who are discussing human job loss caused by smart machines in the future — the other is Andrew Yang. This development is real progress from the 2016 election when there were no discussions of the approaching employment breakdown: despite the endless of hours of pre-election debates and discussions, the issue was absent.

The good news about the de Blasio interview was Tucker’s question to the mayor: “If you really believe that automation is a threat to low-skilled jobs, why are you for mass immigration?”

The bad news is how Tucker became distracted from the important discussion about America’s future under smart machines to badger de Blasio about his terrible management of New York City: one topic is of a transitory nature; the other is world changing.

At least there were several good minutes before the important topic of automation was mostly lost:

TUCKER CARLSON: So in the three or so years the show has been on the air, we’ve taken a bunch of different positions on a bunch of different topics, but one thing we’ve always been consistent about from the first day until today is making fun of Bill de Blasio, the Mayor of New York — on every topic. If you watch this show, you’ll know.

Then the other day, it came to our attention that de Blasio has raised an issue that too few in either party are talking about. It’s the question of automation. He has got a piece in “WIRED” magazine on it.

De Blasio, as you as you know is also running for President. Something else we’ve made fun of. But his position on automation really struck us is pretty interesting, so yesterday, we arranged a phone call and we talked about a very friendly conversation, invited Mayor de Blasio to come on the show to talk about that and other things and he was gracious enough to respond.

And so we’re happy to have Mayor Bill de Blasio join us tonight live. Mr. Mayor, thanks a lot for coming on.

MAYOR BILL DE BLASIO (D-NY): Thank you, Tucker and I appreciate that you care deeply about this issue of automation because it’s bearing down on all of us.

CARLSON: It is, it is and my praise of you on this question is totally sincere. Very few people are taking this seriously. Andrew Yang is one of them, you’re another. I can’t think of many others who are, and so God bless you.

Middle-class Americans, working-class Americans whose jobs are not going to be there if we don’t do something different. Because right now, the recent estimate I saw, 36 million jobs that could be made obsolete. We’re talking as early as 2030 — 12 years ahead. Eleven to twelve years from now.

So here’s the reality. Right now, in fact the Federal Tax Code rewards companies that invest in the kind of technology that actually sheds jobs, destroys jobs.

Our tax dollars are helping companies — incentivizing companies to get rid of more and more American workers. So my plan is simple, it says, end that. We’re talking about hundreds of billions of dollars that we could use to actually address our bigger issues in this country and employ a lot of people.

DE BLASIO: And by the way, South Korea is doing that right now. They recognize that if they don’t stop incentivizing companies, a lot of times these companies are making the decision simply because it’s better for their tax reality rather than what’s better for working people or even productivity.

The second point of my plan is, let’s institute something — Bill Gates actually was the first one I think to call for — which is a quote unquote “robot tax.” It says simply, you know a worker pays income tax. You take away millions and millions of workers, that’s a lot less revenue to take care of all the things we need in our society and it means of course, millions and millions of people who don’t have a livelihood.

I believe in work. I think you do, too. I believe we need a future that’s based on work. So if a company is going to put thousands of people out of work, they should bear responsibility for making sure that those folks get a new job, either in the same company or elsewhere.

But that tax is both an incentive to keep people on the job in a good way, in a productive way, it also provides money to help foster from the Federal level the kinds of things we need a lot more of. We need a lot more investment in renewable energy and recycling and environmental restitution. There’s all sorts of this.

CARLSON: Well, let me ask you this question though, okay, so I’m not sure I think of the second, but I don’t think it’s totally crazy. You know, I am happy to read and think about it more. So we’re together up until this point, but if you really believe that automation is a threat to low-skilled jobs, why are you for mass immigration?

What are all of these people going to do, we’re importing with your help?

DE BLASIO: Look, Tucker, I’m not finished on the point about what we’re trying to achieve here and I certainly want to answer that question, it’s an important one. Let’s just be clear about the central point here.

Right now, there is no American strategy, no Federal government strategy to address automation and it could be the single most disruptive force in our society that we’ve ever experienced.

If you talk about tens of millions of working-class and middle-class Americans who no longer have work or the prospect of work, that’s unacceptable.

So the Federal government has to step up. There is no strategy now. There’s no candidate in my opinion who is offering a coherent strategy. I respect Andrew Yang for raising the issue.

CARLSON: So I agree. I would say that immigration — immigration is a close second as a force to transforming the country and the two are at cross-purposes. So immigrants come here overwhelmingly to work in low-skilled jobs, a lot of those jobs no matter how hard we try are going away. This is crazy, why are we doing this?

DE BLASIO: Well let’s face it, there’s a huge number of jobs right now and let’s take agriculture as an obvious example. We’re in the worst of all worlds. We don’t have enough workers to do the work among the people already in this country and we don’t have a coherent immigration system including something as obvious as a guest worker program, a legal guest worker program.

CARLSON: Okay, but Ag is a small sector.

DE BLASIO: That could actually take this some place.

CARLSON: Okay, Ag is — and that’s a separate debate. I disagree but that’s not — I mean, the much bigger picture is jobs in the service sector are going away that immigrants fill. We continue to import immigrants at over a million a year, why are we doing that?

DE BLASIO: Although I appreciate your point, the magnitude here speaks otherwise. Again, let’s take that number of 36 million and there are estimates that go a lot farther than that, Tucker.

How do we have a threat to our security, to our stability as a country, to our social fabric and there’s no strategy whatsoever? In fact, the recent tax legislation made it worse. Encouraged companies to lay off more workers and to put the money into new machines.

CARLSON: So what you’re saying — and I agree with you — is that we have this massive problem that everyone is ignoring and I want on that point to transition to the city that you run — New York, where I was yesterday.

The city is dirty and it’s getting dirtier. One of my producers told me just yesterday that he was in a crowded subway car and a man dropped his trousers and defecated in the middle of the car and no one did anything about it and that’s a metaphor for what’s happening.

I go there regularly — and I have my whole life — and every time I go under your Mayorship, it is dirtier. There’s filth on the sidewalks. Do you notice any of that?

DE BLASIO: Tucker, look here’s what’s going on in New York City today. We have challenges, no doubt, and I don’t accept a situation like that. I’m someone who believes the quality of life has to be addressed aggressively. I believe in quality of life policing, I always have. That kind of situation is unacceptable. (Continues)