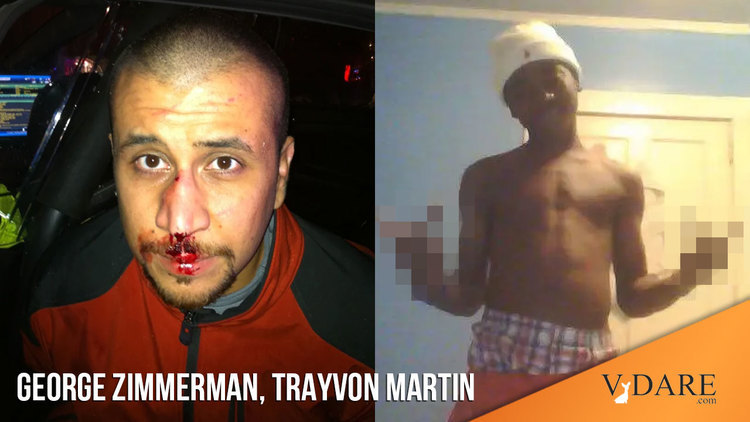 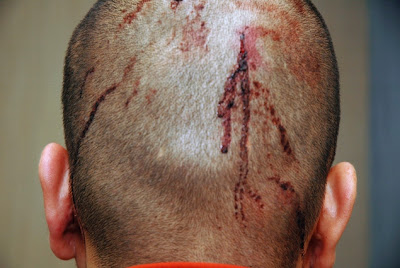 George Zimmerman: The real victim. The bloody wounds that Trayvon Martin inflicted on the back of Zimmerman’s head, when Martin repeatedly slammed Zimmerman’s head into the pavement, while trying to murder him (State Attorney's Office) 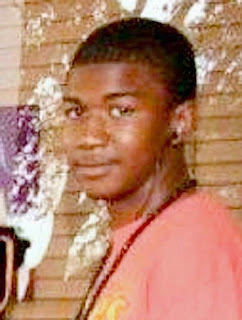 In spite of the screamingly pro-prosecution bias of presiding Judge Debra Nelson, the defense team of Don West and Mark O’Mara were able to rip into the weak case of bumbling prosecutors John Guy, Richard Mantei, and Bernie de la Rionda.

Before the “day” even officially began, there was a hearing on whether to permit the prosecution to play five calls Zimmerman had made to police prior to the night he killed Martin. The prosecution’s motivation was clearly racial. It wants the jury to hear Zimmerman constantly describing criminal suspects as black males. Never mind that black males were committing virtually all the crimes in his community.

To my knowledge, Judge Nelson has not yet ruled on the prosecution’s request.

And then the day’s normal trial business began.

The prosecution had described Zimmerman as full of “hate in his heart,” yet prosecution witness Wendy Dorival described him as “professional” and “timid,” and had nothing but praise for him. Dorival, who is black, is an employee of the Sanford PD, who was incharge of teaching residents how to set up neighborhood watches.

Donald O’Brien, the president of the HOA, clearly despises Zimmerman. That is surely due to the $1,000,000 in racial extortion that the HOA has had to pay Martin’s parents. On direct, Mantei got O’Brien to claim to have not believed the HOA needed a Neighborhood Watch, and that the police had ordered residents never to follow anyone they suspected of being criminals. He reiterated said positions on cross, but O’Mara got him to repeatedly contradict himself. For instance, O’Brien admitted that the community had suffered a rash of burglaries, and while he initially claimed that the police came just as often after signing an agreement with the community as before, he then admitted that the agreement permitted police to enter the community on non-emergency calls. O’Mara got O’Brien to admit that one burglar was caught because 24 days before George Zimmerman followed Trayvon Martin, “stucco guys” doing contracting in the neighborhood had “followed” the perp “from a distance,” and called the police, who then arrested him.

“I said the stucco guys followed the guy, and notified the police.”

Not only that, but O’Brien sent out an e-mail, celebrating within the community what the “stucco guys” had done.

O’Mara asked O’Brien to describe the burglar, but the former then played games and gave no useful information. He didn’t want to say the burglar was black. O’Mara kept asking him for more information.

Finally, O’Brien noted that the burglar was black.

The two sides then jousted repeatedly over the meaning of “follow” and “from a distance.” As an HLN panelist quipped, they were not only arguing about the meanings of words, but over getting the last word in.

Prosecutor John Guy misled the jury by addressing Crime Scene Technician Diana Smith as “Officer” during her forensics testimony. (HLN misled viewers by referring to her on screen as a “crime scene investigator.”) Guy was careful, however, to get Smith to testify that she is married to Police Officer Tim Smith, the first Sanford PD officer on scene, thus stealing the defense’s thunder.

Smith misled the jury, as well, by claiming to have made a drawing of the “crime” scene. As defense attorney Don West gently elicited on cross, however, Smith had not made the drawing, her colleague, Ms. Wartow had. Smith also could not answer basic questions about the distance between evidence markers in the drawing she had taken credit for, and had failed to seek for blood evidence in the area where Trayvon Martin had pounded George Zimmerman’s head into the concrete. And Smith was able to convey to the jury that the crime scene was naturally contaminated, due to the steady drizzle falling at the time (re Zimmerman’s blood).

It turned out that Smith had taken pictures of Zimmerman after 11 p.m., four-and-a-half hours after the incident, and after he had cleaned his face (and head?) at least twice. First, at the scene, an EMT had handed him a towel to wipe off his bloody face, and at the station house he had washed his face, before Smith photographed him.

This was negligence on the part of the Sanford PD. For while the EMT who gave Zimmerman the towel to clean himself off at the scene may have meant well, everything on Zimmerman’s face was evidence. Likewise, Smith should have instructed Zimmerman to not wash his face before she photographed him.

I believe that what I’m saying is SOP, or even common sense, rather than 20/20 hindsight.

Smith’s incompetence reminded me of stories I’d read about black affirmative action crime scene workers in Atlanta. Then again, although she is white, she got her job through nepotism, rather than qualifications. (She reported on the stand getting all of her training on the job.)

Smith went over the many photographs she’d taken of the dead Martin at the scene, as well as of evidence, most of which HLN refused to permit the audience to see. Even the ones the station briefly showed its hosts called “graphic” and disturbing.”

This viewer found photographs of the decedent face down on wet grass in the dark underwhelming. Even the pictures I later saw on HLN’s Nancy Grace Show of Martin flipped on his back were anti-climactic.

If I had been at the crime scene, I might have been disturbed to see Martin’s face up close. But this wasn’t a crime scene, it was photographs. And people who are so easily disturbed have no business watching a murder trial.

As for “graphic,” “disturbing” crime victim photographs, the previous month I’d sat in a Knoxville courtroom and seen explicit close-ups of what Lemaricus Davidson, Letalvis Cobbins, Vanessa Coleman, George Thomas, et al. had done to Channon Christian and Christopher Newsom. Now, that was “graphic” and “disturbing.”

HLN was exaggerating the character of the photographs of Trayvon Martin, in order to whip up hysteria, because it is seeking to railroad George Zimmerman.

However, West was nevertheless able to use Smith to help his client’s case. The prosecution had emphasized that no blood from Zimmerman had been found at the scene. He went over the dozens of photographs that Smith had taken of Zimmerman. Although the front was washed clean, many abrasions were visible on Zimmerman’s face. But it was with the rest of Zimmerman’s head that West did his best teaching for the jury.

West carefully went over picture after picture with Smith, teasing out one swollen head wound after another. Martin had smashed Zimmerman’s head again and again into the concrete, such that it was a miracle he remained conscious. And had he lost consciousness, there can be no doubt that Martin would have finished what he sought to do.

In spite of the cleanings, there was a thick line of blood from Zimmerman’s scalp to behind one ear, and abrasions and traces of blood on the back of his head.

Fortunately, at the scene, immediately after Zimmerman had killed Martin, neighbors took pictures on their cellphones of Zimmerman, and those pictures showed his massively swollen nose and the blood below it, as well as the bloody back of his head.

Zimmerman’s black neighbor, Selene Bahadoor, was the prosecution’s first “witness,” and she was a catastrophe for the prosecution. She gave testimony that she had never given in her previous four witness interviews, claiming now that she had heard someone run from left to right, and kept digging herself a deeper hole. After initially claiming that she couldn’t recall whom she had made that claim to first, she kept trying, in vain, to find it in the transcripts from her previous interviews. She also claimed that she and her sister had visited with investigators for 45 minutes, during which they never discussed her testimony. [At this point O’Mara was insinuating that at least one prosecution investigator had suborned perjury.] Then she claimed that she had first made the (left-to-right) claim to her sister, who lived with her, and who was in the house upstairs at the time of the incident, but insisted that the sister had never mentioned to her whether she’d seen anything.

The defense completed impeaching Bahadoor’s testimony by showing that while she insisted that she was impartial, she had not only “liked” a Facebook page supporting “Justice for Trayvon Martin,” while never expressing support for Zimmerman, but that she had also signed a change.org petition from Martin’s parents, demanding that their son’s killer be prosecuted, and placed it on her own Facebook page.