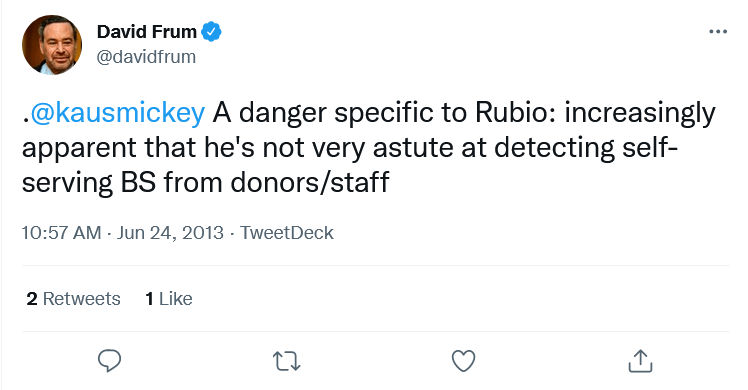 .@kausmickey Danger of imm deal to GOP prez aspirants: by 2016, it will be clear how much untruth was spoken to sell it - and by whom

.@kausmickey A danger specific to Rubio: increasingly apparent that he's not very astute at detecting self-serving BS from donors/staff

Whenever I think of Rubio meeting his donors, I hear Kathleen Turner's voice in "Body Heat" (1/2):

In a post titled Schumer v. Rubio: Which One Looks Smarter? Steve Sailer contrasted Rubio's IQ with Chuck Schumer's (Schumer is supposed to have scored 1600 on his SATS).This a quote from that post:

Rubio did not graduate from Tarkio College because it was shut down by the federal government for acting as a "front" to scam the student loan system...

We've had occasion to say that David Frum is wrongheaded, but no one can say he's not smart.