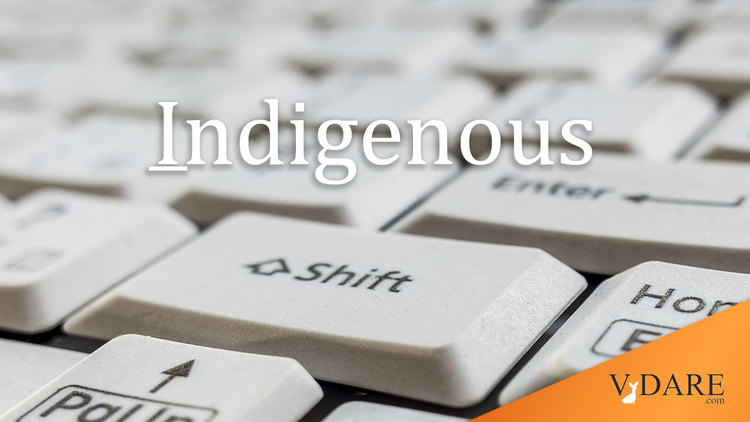 DAS KAPITALIZATION: In The Future EVERYTHING Will Be Lowercase Except Privileged Identities Like Black And Indigenous

A press release from Mount Royal University in Canada:

dr. linda manyguns, phd, is the associate vice-president of indigenization and decolonization at mru.

I wonder what % of dr. manyguns, phd’s students find her name triggering?

this is a beginning effort at describing the use of lower case on the website of the office of indigenization and decolonization.

Indigenous people have been actively engaged in a multidimensional struggle for equality, since time immemorial. we strive for historical-cultural recognition and acknowledgment of colonial oppression that persistently devalues the diversity of our unique cultural heritages.

“the explicit demonstration and practice of aboriginal culture in everyday life or at places of resistance is called by academics ‘eventing.'”

these sites of struggle are generally found at blockades, where demonstrations against racism occur, where racialization and cultural domination, and discrimination leave the mark of imbalance and abuses of power. sometimes these sites generate media interest but interest is generally fickle.

the explicit demonstration and practice of aboriginal culture in everyday life or at places of resistance is called by academics ‘eventing.’

What about Don Marquis, author of the archy and mehitabel cartoons of 1916 about a cockroach who is a reincarnated free verse poet who types by hopping from key to key and thus can’t hold down the shift key?

except to acknowledge the Indigenous struggle for recognition.

OK, come the revolution, only the word “Indigenous” will be capitalized.

we resist acknowledging the power structures that oppress and join the movement that does not capitalize. …

Apparently, not capitalizing is a way to strike back at capitalism. Or something. From a 2013 review in the Winnipeg Free Press of a book by peter kulchyski:

… Author Peter Kulchyski, a University of Manitoba native studies professor, has long taken an aggressive stand on behalf of aboriginal rights in journals like Canadian Dimension, Briarpatch and the Journal of Canadian Studies.

Alas, from its opening pages, Aboriginal Rights Are Not Human Rights is exasperating, largely because the material is a challenge to decipher.

Kulchyski’s decision to use limited capitalization and punctuation leaves the reader little choice but to work through the text with a pencil in hand to sort out sentences — and to separate lengthy chunks of material into paragraphs.

Does he think the conventions of English typography are to be disregarded as the tools of running-dog capitalists?

… He insists “the left and aboriginal people in Canada have a lot to say to each other if they could really start talking.”

Kulchyski, however, should know he is more likely to find a receptive audience if he spoke in a language people understand.

Canadianisms stand at a disadvantage compared to the American cultural juggernaut, although occasionally a few Canadianisms, such as BIPoC, leak across the border.

What’s the story about anticapitalizationism?

From Mashable SE Asia a few years ago:

In the ’70s, famed feminist writer and thinker bell hooks chose a lowercase pen name that embodied the movement’s turn away from the individual and toward ideas around the collective. Language is a construct of patriarchal society, these theories posit, and its elitist rules act as a gatekeeping method to uphold the racist and sexist system that created said language. …

Whether they know it or not, the rebellious nature of lowercasers also comes from a more recent niche of women, who influenced a lot of early web culture: “cool tumblr feminists,” Levin says, pointing to kara jesella, who often lowercases her name online.

Miller and others also agreed that Tumblr (which, let’s not forget, has a logo stylized with a lowercase “t”) was at the heart of what made lowercase an online norm. But Levin goes further, tracing a lot of other popular internet speak to feminine affectations, like the multiple question marks (???) as uptalk or overuse of cute emoji.

… Namely, many stan (meaning fan accounts and their followers) and queer online communities have adopted “no autocaps” as a rule of engagement. But most of the people I talked to who identify with these groups have their own different, individual interpretations for why they think that is.

K-pop culture writer Josh Calixto, while not a lowercase devotee himself, noticed its proliferation across the fandom. He attributes it, in part, to “an attempt at respectability.” After gaining a reputation in the media as crazed weirdo fanatics who have zero chill and post all caps YouTube comments, the K-pop community has made several coordinated efforts to distance themselves from the stereotype. …

What’s interesting to note is that all these groups who’ve taken to the lowercase — whether queer, K-pop, or lady bloggers — are also coincidentally groups known for internet trendsetting. Though rarely given credit (remember the forgotten origins of “yas queen?”), these online communities are often ahead of the curve, influencing mainstream web culture that then unwittingly adopts their content, jokes, memes, and lingo. …

But above all, lowercase’s biggest function in these contexts is as a way to signal to one another that you’re a member of that community.

“i’ve never thought about it before, but it’s possible that it gives people a sense of belonging? you’re right, its like unintentionally signaling that someone is lgbt+ or run a fan account !” says Christina, who asked not to use her last name. The avid anti-autocaps Twitter user coincidentally started questioning her sexuality right around the time she joined stan communities and, after realizing it was the norm, switched to using all lowercase.

Many others also cited seeing others in their community disable autocaps as the reason for why they started doing it. This behavior isn’t new or unique to internet communities. Assimilation into any culture requires new members conform to the implicit, unspoken, and often arbitrary idiosyncrasies of how that specific group chooses to communicate.

On the other hand, the media (with the exception of the Washington Post) decided during 2020’s Racial Reckoning to capitalize “Black” but not “white” as a sign of whose moral worth is to be subordinated to whom in this outlet. So, it’s not terribly likely that no matter how far the anti-capitalizationists succeeds in colleges north of the border, that African American academics will give up adulating themselves as Black while demeaning the bad guys as whites.

My guess is that in the future, everything will be lowercase except for a handful of privileged identities such as Black, Indigenous, and Person of Color.

Personally, I capitalize a lot of stuff because it makes me feel like a pompous German philosopher like Hegel. Also, it’s a way of calling attention to increasingly ubiquitous phrases, such as the Racial Reckoning. The mainstream media uses the term “racial reckoning” a lot, but only as praise. Dissidents don’t use the term “racial reckoning” much at all, not seeming to have noticed how funny it is or even noticing it all.

So I use Racial Reckoning to point out that it’s a ludicrous cliche for a disaster.