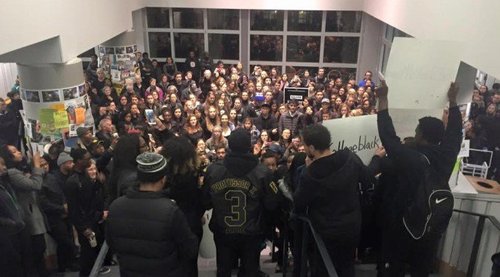 At VDARE.com we strive to get things right.  Our editors try to dig up substantiating links for any factual material we present.

Homer nods, though, and so do we occasionally.  Last week's Radio Derb included this paragraph:

When black students went on a rampage at the Dartmouth college library, yelling foul-mouthed racial and sexual abuse at white students trying to study,the President of Dartmouth, Philip J. Hanlon [email him] wrote that the library ruckus was “a powerful expression of unity in support of social justice.” [Dartmouth President Announces Investigation of Black-on-White Intimidation, By Lee Stranahan, Breitbart.com, November 25, 2015.]

If you click on that last link, however, you read that:

On Thursday evening, Nov. 12, a large demonstration by members of the Dartmouth and Upper Valley communities culminated in a moment of silence in front of Dartmouth Hall. This demonstration was a powerful expression of unity in support of social justice—Dartmouth at its strongest.

I cannot say the same about events that transpired in Baker Library immediately afterward. I have heard reports of vulgar epithets, personal insults, and intimidating actions used both by students who entered the library and students who were already in the library. We are actively investigating all reports of violations of College policy, and will enforce appropriate sanctions. Such behavior is antithetical to our values and goals as an institution. As one of the great institutions of higher learning, we are committed to the open and energetic exchange of ideas. And as Dartmouth’s citizenship pledge reminds us, we must treat each person with dignity and respect. Abusive language aimed at community members—by any group, at any time, in any place—is not acceptable.

So President Hanlon was praising the pre-rampage demo, not the rampage itself.

It's a small point, considering that presumably the people involved in the rampage were also there at the demo.  I venture to suggest it's a smaller point than some bigfoot journalistic outlets would post a correction for.  As I said, though, we try really hard to get things right, and post corrections when we don't.