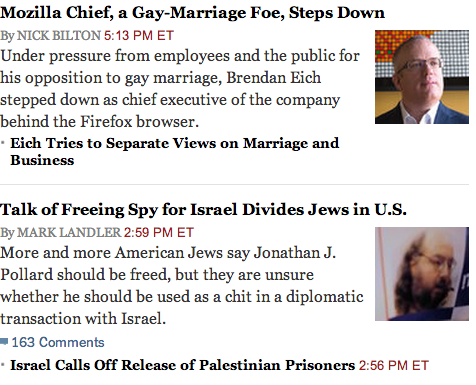 Unlike Brendan Eich, fired today for having donated $1,000 to a 2008 initiative campaign, the great and the good are deeply concerned about the welfare of traitor Jonathan Pollard. Even more so, they are worried about whether or not their desire to help Pollard will encourage the Darkest Elements in American life. From the New York Times:

WASHINGTON — Each year, just before Passover, Malcolm Hoenlein writes a letter to President Obama, requesting that he grant clemency to Jonathan J. Pollard, the American sentenced to life in prison in 1987 for passing suitcases stuffed with classified documents to Israel.

This week, with his goal suddenly within reach, Mr. Hoenlein, the leader of an umbrella group of American Jewish organizations, has held off on sending the letter. He is waiting to see whether Mr. Obama will release Mr. Pollard as part of a prisoner exchange with Israel that would extend peace negotiations between the Israelis and the Palestinians.

Even now, nearly three decades later, Mr. Pollard’s case bedevils American Jews. While more and more of them believe the time to release him is long past — he spied for an ally, not an enemy, they say, and has expressed remorse — they are deeply divided over whether he should be used as a chit in a diplomatic transaction with Israel.

The talk of freeing him roused another ghost from the past: the dark suggestion that American Jews, like Mr. Pollard, inevitably hold divided loyalties and cannot be trusted in sensitive posts.

If Mr. Pollard is given a hero’s welcome in Israel — a likely situation, given the Israeli government’s long campaign on his behalf — American Jews worry that it will cause a backlash in the United States, where Mr. Pollard is still viewed by many, especially in the national security establishment, as a traitor who sold his country’s secrets for cash.

“Pollard represents the ultimate betrayal,” said Aaron David Miller, one of a circle of American Jewish diplomats who came of age at the time of Mr. Pollard’s arrest. “He is also a poster child for one of the darker tropes in American society: that Jews simply cannot have a single loyalty.”

Dark, dark, dark. To be precise, what's "dark" is not what Pollard and Israel did with American nuclear sub deterrent secrets (likely barter them to the Soviets); no what's "dark" is gentiles noticing.

Nowhere was the anxiety more acute than among Jews working in sensitive jobs involving the Middle East, jobs that were just opening up to Jews during the Reagan administration.

Daniel C. Kurtzer, a former ambassador to Egypt and Israel, said he knew of Jews who were removed from projects involving Israel after Mr. Pollard’s arrest. Even now, he said, Americans with relatives living in Israel are sometimes denied high-level security clearances.

Dennis B. Ross, a senior adviser on the Middle East to both President Bill Clinton and President Obama, recalled fearing that his loyalty as a Pentagon policy analyst would be questioned after Mr. Pollard’s arrest. “Initially, there was a kind of abhorrence,” he said. “But the longer he’s been in, the more people ask questions.”

Note, please, that with the phrase "people ask questions," Ross is not referring to non-Jews asking questions about himself and the absurdity of the U.S. claiming to be a neutral honest broker on Israel-Palestine negotiations when Ross swings so much weight inside both Democratic and Republican administrations. He's referring to Jews questioning why Pollard hasn't gotten his hero's welcome in Jerusalem yet. They're the people who count.

Still, what could be darker than the possibility that someday Dennis Ross, who doesn't have an ethnically-biased bone in his body, might not be employed by the President of the United States as an honest broker to work out a fair peace deal between Israel and Palestine? The only thing darker, more hellish would be if somebody asked out loud whether or not it's wholly a good idea for Stanley Fischer to go from running the Bank of Israel to being eminence grise at the U.S. Federal Reserve.

Are Gentile-Americans allowed to expressed their views on Mr. Pollard and the question of dual loyalties in the news columns of the New York Times, or is that privilege restricted solely to Jewish individuals? Will the NYT run an article on what leading Gentile-Americans feel about leading Jewish-Americans' demands for the traitor's release, or is that question simply not on the table? Would the NYT even be able to find any prominent Gentile-Americans brave enough to criticize Jewish-Americans' loyalty on the record? We hear a lot from Jews speculating about the dark thoughts that must be surging through non-Jews brains, but we don't hear much in the official discourse of the media from anybody brave enough to express those dark thoughts themselves.