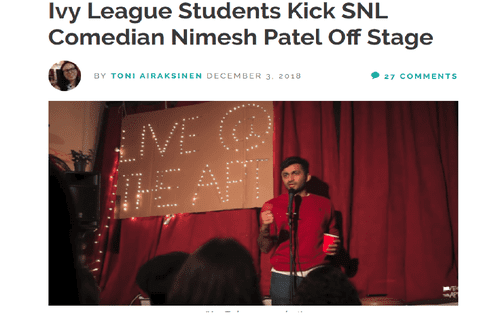 Nimesh Patel, a comedian known for being the first Indian-American writer for Saturday Night Live, had his stand-up routine at cultureSHOCK cut short earlier tonight due to uncomfortable jokes. cultureSHOCK, an event hosted by the Asian American Alliance, is a charity performance showcase that aims to provide a space to celebrate Asian American expression. Patel was one of the main events promoted beforehand.

However, his jokes quickly progressed to uncomfortable territory, including one about a gay black man who lives in his neighborhood and how “[I]t made me realize that being gay is definitely not a choice because no one wants to be gay and black.” The tension in the room increased as Patel told more jokes in this vein until organizers of the event went up on stage to stop him, citing a change in program plans.

Patel questioned why this was happening. The organizers replied that the person in charge of tech had to leave early, but Patel continued to claim that he was being cut off because the audience didn’t like his jokes. At one point, one organizer told Patel he was being disrespectful.

When asked for closing remarks, Patel responded: “I’m a generation older than all of you I know comedy,” and called the organizers incorrect in ending his set. He tried to continue speaking until his mic was cut.


From the Columbia Spectator:

… Patel joked that being gay cannot be a choice because “no one looks in the mirror and thinks, ‘this black thing is too easy, let me just add another thing to it.’” …

… Adam Warren, CC ‘22, was in the audience Friday night. Warren said that AAA made the right decision to remove Patel from the stage due to the nature of his jokes, which contradicted the sensitive nature of the event itself. …

For Sofia Jao, BC ‘22, problems with the performance resided not in the set, but with Patel’s closing remarks.

“I really dislike when people who are older say that our generation needs to be exposed to the real world. Obviously the world is not a safe space but just accepting that it’s not and continuing to perpetuate the un-safeness of it… is saying that it can’t be changed,” said Jao. “When older generations say you need to stop being so sensitive, it’s like undermining what our generation is trying to do in accepting others and making it safer.”