Milford, Massachusetts has already suffered too much illegal alien violence with the dragging death of young Matthew Denice at the hands of a lawbreaking Ecuadoran, Nikolas Guaman. Now the accused killer’s brother has been arrested for stabbing another man.

Below, diverse criminals David and Nikolas Guaman are an example of criminal family values among illegal aliens. 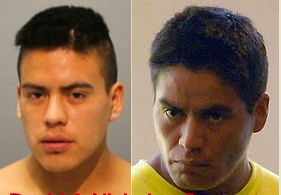 Despite a “severe cutting,” the victim is expected to survive, no thanks to David Segundo Dutan Guaman, who knifed the guy at a party. Like his older sibling, David had previous arrests but was not deported.

Massachusetts Governor Deval Patrick is notoriously friendly to illegal aliens and has rejected Secure Communitie for his state. The Denice family called on the governor to enact the program to prevent further violence by illegal alien criminals by punishing and deporting them. But Gov Patrick refused, and has remained a friend of foreign criminals and an enemy of public safety.

The Denice family is still engaged on the issue and spoke out against the policies that protect dangerous foreigners. They have a spokesperson, shown in the video below, and released a statement on the recent case, included in the print story following.

David Segundo Dutan Guaman is charged with armed assault after a stabbing at his home on Water Street in Milford early Saturday morning. He is an illegal immigrant, and was wanted on warrants in connection with driving violations.

His brother, Nicolas Guaman, is charged with driving a pick up truck that struck and killed Matthew Denice last August.

Another brother, Pablo Guaman, is charged with giving Nicolas the truck. He is out on bail, wearing a monitoring bracelet.

ICE officials say at this point it appears David was not in their system. State officials confirm they did not have any fingerprints from him prior to the weekend stabbing. Now, ICE has launched a retainer against David Guaman, which means if he is let out of custody, ICE has 48 hours to take him into custody.

Milford’s Police Chief Thomas O’Loughlin says this case is a reminder to the community of Matthew Denice’s death, and the frustrations with the lack of comprehensive immigration reform. He says if the program, Secure Communities, was in place in Massachusetts, David would not have been identified because he hadn’t been arrested in a violent crime; however, he says other measures are needed to strengthen immigration laws. He says, “When is the federal government going to do something about individuals such as David Guaman and his brother? Until they do something, local police and state police we are in the middle dealing with the issues.”

Wendy Murphy, who represents Matt’s family, says, “Mathew Denice’s family is very distraught to hear there is, in a sense, the same kind of problem in this case.” Both men are illegal immigrants and both have driving records. Murphy says, “It looks like there is a systemic problem, in the sense that people who are here illegally, and are being coddled by the legal system, are escalating their illegal behavior, and we’re seeing acts of violence.”

Murphy says while Secure Communities would not have lead to David’s deportation before the stabbing, it is a tool that could help collected data and monitor crimes. She says Governor Patrick should reverse course and ask for it to be implemented to help understand the facts. “The public has a right to be angry, and has a right to ask political leaders of the state, why aren’t you measuring the problem?”

Governor Deval Patrick has opposed the Secure Communities program. Last year, ICE announced it will be implemented in every state by the end of 2013.

11.2 million people live in the United States illegally. Officials with ICE say they can only deport 400,000 people per year because of their financial resources. For that reason, they say they focus on deporting violent criminals.

David Guaman will be arraigned on Tuesday in Milford District Court.

The victim in the stabbing is expected to survive.

“Despite all the promises that were made by local officials, politicians, and leaders in the Ecuadorian community after our son Matthew Denice was killed, David Guaman, like his brother Nicolas, who killed Matthew, should not have been free to become involved in more serious violence. We are extremely concerned that despite all the promises that were made, about how things would soon improve and that the public would be better protected, nothing much has changed. Unlicensed drivers are cited on a daily basis, many of them after being involved in accidents or for being pulled over for driving drunk. Without proper training, passing a written test and a road test these drivers put all of our lives at risk on a daily basis. In Milford there has been a huge increase in excessive drinking that has resulted in several violent assaults over the last few months like this most recent stabbing by David Dutan-Guaman.

Our son Matthew Denice paid the ultimate price with his life because Nicolas Dutan-Guaman, who was in the country illegally, had a criminal record, and was unlicensed, chose to get drunk and drive. We are still deeply disappointed that when Governor Patrick had the opportunity he did not chose to participate in the Secure Communities Program that would eventually lead to deportation of the most serious offenders illegally in our country.”