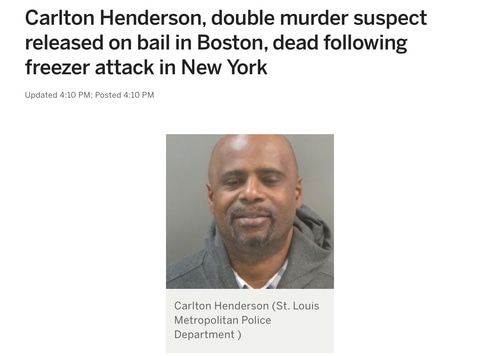 A crazed black man with a knife leapt out of a freezer in New York City, yelling about Satan. Staff were able to restrain him somehow, and he immediately  died of a heart attack. 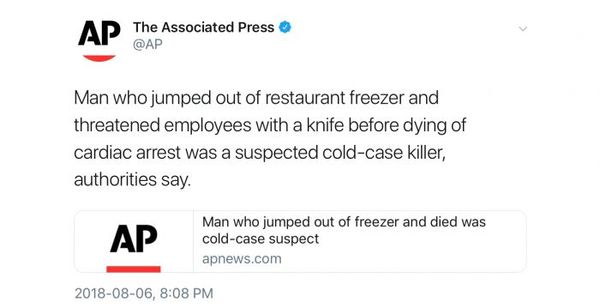 Which people onTwitter couldn't help  thinking was funny: (Cold Case. Freezer. Get it?) 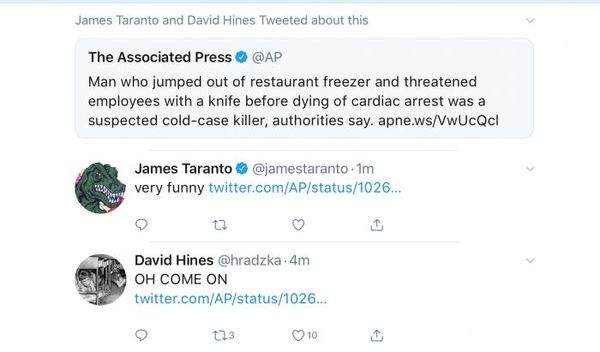 Here's what's not funny--a judge released this man, in spite of the fact that he had admitted to being a killer, because she decided to "suppress" that evidence. This has been happening all my life, and it needs to stop.

Carlton Henderson, a 54-year-old man accused of murdering two people in Boston in 1988, died in New York City on Sunday after he allegedly emerged from a restaurant walk-in freezer and attacked employees.

Henderson was released on bail in Boston just last week, on July 31, after Judge Janet Sanders granted a motion despite opposition from the Office of Suffolk District Attorney Daniel Conley.

Henderson, an Arizona man, was arrested in Missouri in April 2017 and returned to Boston on murder charges tied to the homicides of William Medina, 26, and Antonio Dos Reis, 22, on Windsor Street in Roxbury on May 4, 1988.

The shooter tied to the 1988 homicides evaded police for years. Boston Police were unable to find the suspect who shot the young men, but a 1991 murder in Miami led to a crack in the case, according to reporting by Boston 25 News.

When he was returned to Boston in 2017, Henderson faced two counts of first-degree murder for his alleged role in 1988 homicides.

Last week, Sanders allowed a motion by Henderson's defense, which asked that statements made to law enforcement in San Diego in July 1993 be suppressed.

Those statements, made by Henderson in 1993, were directed to Boston Police detectives who traveled to San Diego to speak with him after a federal prosecutor there said there was a witness "who had information on an unsolved homicide from Boston that may have had a drug component," according to court documents.

Nearly 30 years later, after Henderson was arrested on charges related to the 1988 murder, those involved in the 1993 interview could not agree on whether or not they formalized a "proffer agreement" with Henderson, or an agreement in which he was promised his words would not be used against him in later court proceedings.

The district attorney's office opposed the motion to suppress, which would release Henderson on bail, but Judge Sanders allowed it. Henderson was released last week and on Sunday, he allegedly attacked restaurant employees on the Upper West Side in New York City before dying of some medical condition.[More]

So you might think that a black man with a long history of killing people who leaps out of a freezer with a knife is that crazy person here, I say it's Judge Janet Sanders (pictured right) of the Massachusetts Superior Court.

Briefly, the Fourth and Fifth Amendments were meant to prevent people from being forced to confess, or being unreaunreasonably searched, not to allow judges to let criminals go free because the judge decides, after the fact, that the search was unreasonable.

This goes back to the Warren Court, and led to huge increases in crime in the sixties, with tens of thousands Americans murdered. If Carlton Henderson had been in better condition, there might have been nine or ten more.